“We don’t change the rules for New York City.” 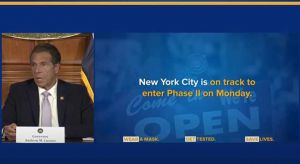 Screenshot capture of Governor Cuomo on June 17 declaring that NYC is on track to reopen into Phase 2 Status on June 22, 2020.

Today,  during his daily press briefing, Governor Andrew Cuomo announced that NYC would be entering Phase 2 Reopening Status after meeting the mandated metrics required by New York State. It would pave the way for additional non-essential services and businesses to reopen. The capacity of which is determined and dependent upon the respective industry involved.

This comes after days of NYC Mayor Bill de Blasio hesitating in deciding upon or rather, definitively stating whether the city would be following in the footsteps of all other regions which have spent 14 days when transitioning from one phase to another.

On June 7, I asked the Mayor about the reasoning behind his previously stating that Phase 2 would come in early July. I asked if it was a matter of caution and he responded in the affirmative.

” Exactly what I was doing was, abundance of caution. We are not like the other regions of the state. We were the epicenter and remain the epicenter of this disease in this state. Our reopening is much more complex than any other part of the state. There’s a reason why we are the last to go to phase one,” said the Mayor.

The same metrics we use in NYC are the same metrics we’ve used in every region across the state and they have all shown to be accurate and effective. We don’t change the rules for New York City. It’s one set of rules for everyone