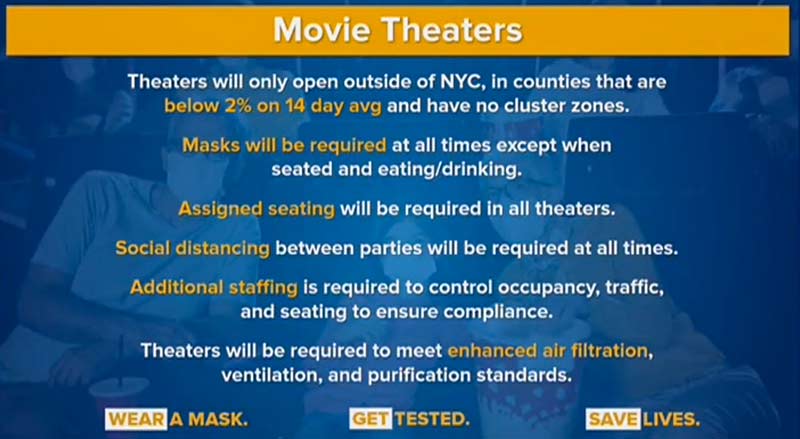 NY Governor Andrew Cuomo today announced that Movie Theaters, outside of NYC, would be allowed to reopen.

The reopening is to begin on October 23, 2020 with a guideline indicating a maximum capacity of  25 percent and no more than 50 individuals per screen. In addition, this applies to counties with an infection rate below 2% on a 14 day average with no Coronavirus clusters.

Movie theater reopening have been placed on hold since the beginning of the states reopening phases due to fears over COVID-19 transmissions in interior spaces.

“Beginning October 23, movie theaters outside of New York City will be allowed to reopen at 25 percent capacity with up to 50 people maximum per screen. I don’t know what that means, 50 people per screen, but it’s 50 people. This is outside of New York City. Areas that are below 2 percent on their 14-dauy average and have no cluster zones. So, this will be Long Island — not New York City — Nassau, Suffolk, Westchester, not Rockland, Orange, not some counties on the Southern Tier, not Greene,” said the Governor.