[March 11, 2015] – The 2015 Tribeca Film Festival (TFF), presented by AT&T, today announced a special celebration to mark the 40th Anniversary of Monty Python and the Holy Grail including a special screening of the film and the international premiere of the documentary Monty Python – The Meaning of Live directed by Roger Graef and James Rogan. In honor of the anniversary the Festival will also host special screenings of classic Python films Monty Python’s Life of Brian and Monty Python’s The Meaning of Life. The five surviving members of the legendary comedy group, John Cleese, Terry Gilliam, Eric Idle, Terry Jones, and Michael Palin, will come together for the special presentation of Monty Python and The Holy Grail, which will screen on Friday April 24 at The Beacon Theatre. Tickets to the cult classic Monty Python and the Holy Grail go on sale on March 23 at www.tribecafilm.com. The 2015 Tribeca Film Festival will take place April 15-26 in downtown Manhattan.

Continuing its celebration of the Pythons, the Festival will debut Monty Python – The Meaning of Live. Directed by Roger Graef and James Rogan, this feature-length documentary offers unprecedented access to the preparations and staging of the Pythons’ 2014 reunion shows at The O2 in London and gives a fascinating insight into the personalities, relationships, and circumstances that made the Pythons into a global phenomenon. Dive into the history of Monty Python on stage and discover the genesis of some of its most well-known pieces, as they prepare for their final live show. The documentary will premiere on Saturday, April 25, Monty Python’s Life of Brian will screen on April 25, and Monty Python’s The Meaning of Life on April 26. Each film presentation will be followed by a Q&A with some of the members of Monty Python.

“It is hard to believe that Holy Grail was first shown 40 years ago,” said Paula Weinstein, Executive Vice President, Tribeca Enterprises. “The film is so brilliant and the Pythons’ influence on contemporary comedy in cinema and television is so enduring that it feels as fresh today as it did decades ago. We are honored to welcome the Pythons to Tribeca and to share stories of their groundbreaking process with our audience through the international premiere of Monty Python – The Meaning of Live.” 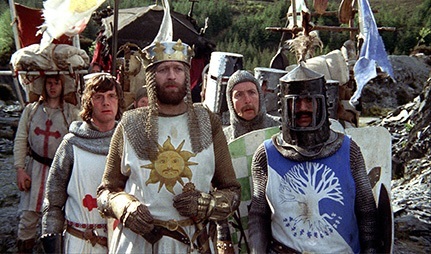 Michael Palin said, “The Pythons are looking forward very much to the Tribeca Film Festival and the chance to meet anyone who can remember why we made Monty Python and The Holy Grail. All we know is that it was a documentary about coconuts that rather lost its way. If anyone at Tribeca can explain why we made it and didn’t call it Braveheart then our visit to New York will not have been wasted.”

Eric Idle continued, “I often had the feeling the movie might make a good Broadway musical….”

Monty Python – The Meaning of Live, directed by Roger Graef and James Rogan (UK) – International Premiere, documentary.  While perhaps best known for its eminently quotable films, Monty Python has performed its signature, surreal humor in live shows since the group’s earliest days. Dive into the history of Monty Python’s on stage and the genesis of some of its most well-known pieces as they prepare for their last-ever live shows at The O2, London in July 2014. Monty Python – the Meaning of Live is a hilarious and illuminating survey of what is takes to bring Monty Python to the stage.

Monty Python’s Life of Brian, directed by Terry Jones (UK) – Special Screening. Monty Python delivers an anarchic satire of both religion and Hollywood’s depiction of all things biblical with their second film. Brian Cohen, born in Bethlehem in the stable next door, by a series of absurd circumstances is caught up in the new religion and reluctantly mistaken for the promised messiah.

CONNECT WITH MONTY PYTHON on Facebook www.facebook.com/MontyPython or on twitter at @montypython and by using the hastag #MontyPython

The new Spring Pass is on sale now at tribecafilm.com/festival/tickets. This pass will provide access to Spring Studios, throughout the Festival, including innovation talks, exhibitions, and special events, as well as a resource center, and creative workspace, with food, and drinks. This Pass will also provide reduced ticket prices for select special events. The Spring Pass costs $400, discounted to $300 if purchased before April 15. Pass holders can invite one guest to accompany them to Spring Studios each day of the Festival. An Individual Day Pass for Spring Studios costs $50, discounted to $40 if purchased before April 15.

The Tribeca Film Festival helps filmmakers reach the broadest possible audience, enabling the international film community and general public to experience the power of cinema and promote New York City as a major filmmaking center. It is well known for being a diverse international film festival that supports emerging and established directors.

Founded by Robert De Niro, Jane Rosenthal, and Craig Hatkoff in 2001, following the attacks on the World Trade Center, to spur the economic and cultural revitalization of the lower Manhattan district through an annual celebration of film, music, and culture, the Festival brings the industry and community together around storytelling.