Mission Impossible: Rogue Nation and ‘The Living Manifestation of Destiny’ – A Film Review

‘and ‘The Living Manifestation of Destiny’ 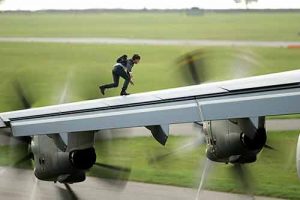 With the IMF disbanded, and Ethan (Tom Cruise) out in the cold, the team now faces off against a network of highly skilled special agents, the Syndicate. These highly trained operatives are hellbent on creating a new world order through an escalating series of terrorist attacks. Ethan gathers his team and joins forces with disavowed British agent Ilsa Faust (Rebecca Ferguson), who may or may not be a member of this rogue nation, as the group faces their most impossible mission yet.

Having raked in upwards of $120 million globally during its opening weekend, Mission Impossible: Rogue Nation surpasses any other Tom Cruise vehicle in dollars brought in. I’m a firm believer that such initial numbers are indicative of folks’ dedication and expectations based upon the success of previous films in the series; and numbers in the weeks thereafter are a reflection of how worthy the film turns out to be. Well, I’m here to do my part in helping this film garner the recognition it deserves.

I’m confident in proclaiming this installment as the very best of the bunch; and I’m not merely saying that because it happens to be the latest one. I loved every single minute from beginning to end. Something which I couldn’t say about every single MI film since there’ve always been a moment or two that’ve left me wanting more. What comes to mind immediately were instances wherein fight scenes may have dragged on longer than I felt comfortable with. It’s such things and the remembrances thereof which might have me in a slightly leery state at the beginning of a film like this. Yet, I’ve got to mention how wonderful it was to surrender myself completely to this creation. Rogue Nation didn’t waste time in disarming me of any apprehension I might’ve had. Nothing keener than giving yourself up to a film, trusting that it’ll take you on a worthwhile ride. 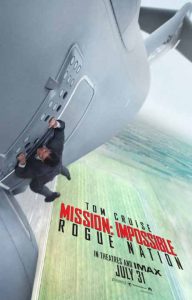 Tense filled settings had me on the edge of my seat. All taking place amidst evenly peppered comic relief. Ringing true throughout with nary a false step. Genuine laughs resonated from fellow audience members as were yelps in response to high suspense acts.

I’m highly looking forward to adding this movie to my collection when the time comes and heck, I may even see it again at the theater. That’s how good it is! I didn’t want it to end and could have easily indulged another hour or so of this experience.

My thanks go out to Christopher McQuarrie (“Edge of Tomorrow,” “Jack Reacher,” “The Usual Suspects”) for his hand in not only directing this gem but as well for the screenplay and story. I can’t help but think of how that might be why the film felt so fluid from start to finish with nary a wrinkle in the plot flow. That is, having one man at the helm of so much. Regardless, MI: Rogue Nation is a jewel not to be missed!

Now on to some of the actual characters and a slight bit of spoiler fun.

Tom Cruise is his usual death defying self who’s just one stunt shy of earning cape wearing status. Say what you will about the actor’s politics and private life…I don’t care; and obviously, neither do most of the millions of fans who turn out for his films. Not that this role’s ever required the greatest of acting range. In my opinion it hasn’t. But there’s definitely something to be said of a man doing his own stunts which he does in fine style here. On the film’s official site, www.missionimpossible.com/video, they’ve a ‘behind the scenes’ footage featurette of Tom performing that well advertised feat of hanging off the side of an airplane. Apparently he had to do it eight times. Something tells me he got a big kick out of performing that crazy deed over and over again.

Although, in all truthfulness, Ethan Hunt’s met his match, or rather, the yin to his yang in Ilsa Faust, an MI6 trained agent, played by actress, Rebecca Ferguson. Gotta say, this woman’s a delight to behold. With her killer skills and deadly pair of beautiful legs she manages to not only help save the world but as well Ethan’s own life more than once. I looked forward to every scene she appeared in and would welcome her appearance in future MI entries. Speaking of which, I’m wondering what the future of the IMF team might be like. The ending scene had her telling Ethan, “You know where to find me.” Thus leaving room for her re-entry into their world. ‘But why stop there? Who says the IMF might not be broadened to include the British Secret Intelligence Service. Considering how Ethan took great strides in helping the Brits save face in this story it’s not far-fetched. Heck, she might even be a great replacement for Mr. Hunt should he ever leave the series.

Before I go, there’s one particularly important scene which really stood out for me. It’s when Ethan has come across Ilsa yet again and she offers him an ‘out’ that’s totally unexpected. She says something to the effect of, “We could always leave…we have everything we need’. This is in reaction to the idea that the bond they share is one of seemingly unworthy superiors and thankless ambitions, however good intentioned they may be. The SIS has turned its back on her, as has the American Government with Ethan, yet again. The look on Ethan’s face in reaction to this suggestion spoke volumes.

The casting of this woman and the introduction of this new character was one of brilliance methinks. The chemistry between both actors and the roles they played could not have been better. I half expected them to kiss in the last scene when they reached out to hug each other. Yes, I know. Ethan’s supposedly married. ‘Or is he? Will she play a bigger role in future MI’s? Will there be some sort of love interest? Who knows. Nevertheless, it’s this sort of storytelling that’s got fans like me aching for the next installment. Thank you MI5 for one Wild Ride!