After suffering dramatic set backs in their personal lives, three close friends who are among the world’s best professional climbers battle their complicated pasts, inner demons and nature’s harshest elements in an attempt to confront the Shark’s Fin on Mount Meru, the most technically complicated and dangerous peak in the Himalayas. MERU is the story of their journey, an expedition to impossible new heights.

Never has a documentary resonated so well with me as this one has. Not that I’m into mountain climbing, I’m not. But one doesn’t need to be involved in the highly perilous sport of mountain climbing to appreciate what these folks have offered up through this documentary film. Featuring world renowned climbers Conrad Anker, Renan Oztark and Jimmy Chin is this film centering on the trials and tribulations they’ve encountered through the years in their attempts to climb Meru Peak. It’s a tale told in such a fashion that the viewer will be sharing not merely in the joy of success but as well, the agony of defeat. With an emotionally charged score brought forth by Academy Award® nominated composer, J. Ralph and co-helmed by award-winning film director and producer Elizabeth Chai Vasarhelyi, is it any wonder that I would consider this film to be Academy Award Worthy material?

The story telling along with the stunning visuals had me so engrossed that It’d taken a while for one simple yet important question to come to mind: How is this film being shot? Considering the death defying skills needed for such climbs a conventional film crew was out of the question. Not to mention the 200 lbs of gear per man being hauled up the worst imaginable surfaces that any skilled climber could imagine. No, this was something which had to be left to the simplest of methods. In this case a Panasonic Handycam was enough to do the job; and what a beautiful job it did!

As for the heavy lifting, the climbing entailed more than one sort of climbing expertise. As stated in the film by mountaineer and best selling author, Jon Krakauer, “You can’t just be a good ice climber. You can’t just be good at altitude. You can’t just be a good rock climber. It’s defeated so many good climbers and maybe will defeat everybody for all time. Meru isn’t Everest. On Everest you can hire Sherpas to take most of the risks. This is a whole different kind of climbing.” Therefore, every single man, pound of equipment, and every ounce of sustenance counted in the direst of ways. As an illustration of this, it was during their 2008 attempt that Conrad Anker, Jimmy Chin and Renan Ozturk were stopped just 100 meters shy of the Shark’s Fin Summit within Meru’s central peak. What was expected to be a seven day long climb turned into 20 as a great storm dashed their hopes and dreams. Having run short of food they had no choice but to turn back. 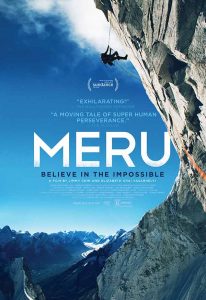 In 2011 these men returned to finish the job they’d begun years earlier. It was on Friday, September 30 that the trio accomplished what none had managed previously. 11 days after beginning their ascent they stood as brave champions atop the summit capturing a perspective never before seen on film. Two days later they’d returned safely to base camp. ‘Meru’ is their story.

The Shark’s Fin route is within the central peak of Meru. It is 20,700 ft in length and is not only considered to be the hardest to climb of Meru’s three peaks, but as well, the hardest in the world. Meru itself is found within India’s Gharwal Himalaya.

Aside from many ascents and expeditions, Conrad Anker is also known for having been a member of the team that searched for and found George Mallory’s remains on Mt. Everest in 1999. In 2003, Mr. Anker, Doug Chabot and Bruce Miller attempted to reach the Shark’s Fin peak and failed. He is also a writer and has appeared in previous documentaries.

Renan Ozturk is a photographer, climber and painter who joined Jimmy Chin and Conrad Anker in their attempts at the Shark’s Fin in 2008 and 2011.

Jimmy Chin is an accomplished climber, skier, photographer, mountaineer and director who along with his wife, Elizabeth Chai Vasarhelyi, directed and produced this film. He joined Anker and Ozturk in their attempted climbs of the Shark’s Fin in 2008 and 2011.

Jon Krakauer is a mountaineer and writer who appears within the film numerous times.

Conrad Anker has made a specialty of climbing the most technically challenging terrain he can find. This search has taken him from the northern realms of Alaska and Baffin Island to the farthest southern reaches of Patagonia and Antarctica, where in 1997, with Alex Lowe and Jon Krakauer, he climbed Rakekniven, a 2,500-foot wall in Queen Maud Land. That climb led to both a film and magazine piece by National Geographic, an organization with which he frequently collaborates. As captain of The North Face Athlete Team, Anker urges climbers to be boots on the ground in observing the changes wrought by man-made climate change. He is also civically active in his home state of Montana, serving on the boards of the Montana State University Leadership Institute, Protect Our Winters, Bozeman Ice Tower Foundation, Gallatin County Fair Board and the Alex Lowe Charitable Foundation.

Jon Krakauer is an internationally acclaimed best-selling author. His works include Eiger Dreams, Under The Banner of Heaven, Into the Wild and Into Thin Air. For the past two decades Krakauer’s writing has been published in the likes of Outside, Architectural Digest, Rolling Stone, Time, The Washington Post, The New York Times, and National Geographic. His 1996 book Into The Wild spent more than two years on the New York Times bestseller list and was made into a feature film directed by Sean Penn. Meanwhile, Into Thin Air redefined the genre of adventure writing and was nominated for a Pulitzer Prize in literature.

Jimmy Chin lives a life of art and adventure, combining a career as a photographer, documentary filmmaker, and 14-year veteran of The North Face Athlete Team. In the past decade, Chin has collaborated with, filmed, and photographed some of the world’s most progressive athletes and explorers while participating in breakthrough expeditions around the planet. He has made notable first ascents in the Karakoram, traversed the Chang Tang Plateau in Tibet on foot, and skied first descents in the Himalayas. He is one of the few people to ski Mount Everest from the summit.

Chin shoots for a wide variety of commercial and editorial clients. His photography has graced the cover of National Geographic and garnered recognition from Photo District News, Communication Arts, the American Society of Magazine Editors and the Lowell Thomas Journalism Awards. Chin has shot and directed documentaries, television and commercial projects for The North Face, Pirelli, Apple, National Geographic, Working Title and RSA Films. As a professional athlete, he has been featured in National Geographic, Outside, People and Men’s Journal. He splits his time between New York City and Jackson Hole, Wyoming with his co-director and wife Chai Vasarhelyi and their daughter Marina.

Elizabeth “Chai” Vasarhelyi’s films as a director include Youssou N’Dour: I Bring What I Love (Oscilloscope, 2009), which premiered at the Telluride and Toronto Film Festivals; A Normal Life (Tribeca Film Festival, Best Documentary, 2003); Touba (SXSW, Special Jury Prize Best Cinematography, 2013) and the upcoming Incorruptible (2015). Vasarhelyi has participated in the Good Pitch and received grants from the Sundance Institute, the Ford Foundation, the Rockefeller Brothers Fund, Bertha Britdoc, the William and Mary Greve Foundation and the National Endowment of the Arts. She holds a B.A. in Comparative Literature from Princeton University and lives between New York City and Jackson Hole, Wyoming.

Renan Ozturk is an expedition climber, filmmaker and landscape artist. His cutting edge first ascents, mountain murals and short films have taken him from the high Himalayas to the remote jungles of Burma. Ozturk has pushed the art of filmmaking in extreme locations in particular through his use of lightweight technology. His video “dispatches,” produced during expeditions, bring the adventure to a worldwide online audience in near real time. Through digital recognition and top film festival awards, Renan’s visual storytelling style is on the cutting edge of the outdoor industry.

Ralph is an Academy Award nominated composer and producer from NYC whose music has sold more than 10 million records worldwide and reached the No.1 spot in over 22 countries. His career began with the signing to Atlantic Records as a recording artist and since then J. Ralph has written and produced the music for numerous Grammy Award winning artists, symphony orchestras, The United Nations, The President of The United States and more Oscar winning/nominated documentaries then any other composer in the history of the Academy Awards. Such films include Man On Wire, The Cove, Hell And Back Again, Chasing Ice, Finding Vivian Maier and Virunga. He is widely regarded for the original songs he writes and produces for these films such as the Oscar nominated “Before My Time” performed by Scarlett Johansson and Joshua Bell, “Hell & Back” performed by Willie Nelson, “We Will Not Go” performed by Youssou Ndour, Salif Keita & Fally Ipupa and “Until The End” performed by Liza Minnelli & Wynton Marsalis. J. Ralph is the only composer to win two consecutive A.I.C.P. awards. Several of Mr. Ralph’s works are included in the Museum of Modern Art’s permanent collection of film and media in New York City.

Mastered by Bub Jess / Out a Sound Recorded