With Piano Songs At Le Poisson Rouge In NYC 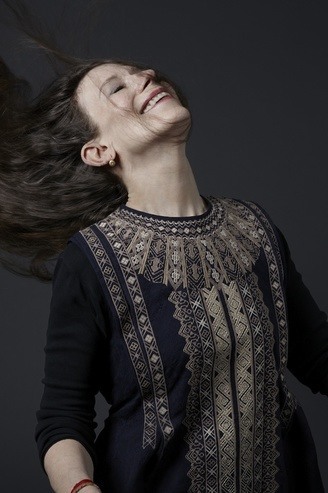 Other Season Highlights Include:

New York Premiere of On Behalf of Nature at BAM

“If Monk is seeking a place in the classical firmament, classical music has much to learn from her. She conveys a fundamental humanity and humility that is rare in new-music circles…Her voice remains an extraordinary instrument: the dancer-like flexibility, the microscopic control of pitch, and the pure, raw tone…later generations will envy those who got to see her live.”—Alex Ross, The New Yorker

“The wonder of Meredith Monk is that having created a musical language and theatrical style, she has been able to stretch and refine them with just about every work.”—Allan Kozinn, The New York Times

Legendary composer, performer, vocalist, director and choreographer Meredith Monk kicks off her 50th season on November 20 (her 72nd birthday) in NYC with a concert of her Piano Songs performed by Ursula Oppens and Bruce Brubaker at Le Poisson Rouge. The program features music composed by Monk between 1972 and 2006—highlighted in her recent ECM album release of the same name—with several new arrangements created by both Monk and Brubaker.

Continuing through the spring of 2015, the season celebrates 50 years of performing with a year of landmark performances highlighting Monk’s ongoing work as one of the premiere musical talents composing and performing today. Events will be hosted by Carnegie Hall (where Monk is honored to hold the 2014–2015 Richard and Barbara Debs Composer’s Chair), Le Poisson Rouge, BAM and San Francisco’s Yerba Buena Center for the Arts. She was also recently named Officier de l’Ordre des Arts et des Lettres by the Republic of France in recognition of her contributions to French culture, and is the subject of a forthcoming book of interviews, Conversations with Meredith Monk, by arts critic and Performing Arts Journal editor Bonnie Marranca. (Publication date: November 20, 2014 / ISBN 978-1-55554-159-0 / $15 / paperback / All PAJ Publications titles are distributed by Theatre Communications Group: www.tcg.org.)

On November 21 members of Meredith Monk & Vocal Ensemble join the American Composers Orchestra to perform Night at Carnegie’s Zankel Hall. Originally composed in 1996, Monk revised the piece in 2005 and orchestrated it for eight vocalists and chamber orchestra.

Monk’s music-theater meditation on the fragility of the earth’s ecology, On Behalf of Nature, receives its New York premiere December 3­­–7 as part of BAM’s Next Wave Festival. BAM has long supported Monk’s interdisciplinary practice, presenting nine works since 1976. (The piece will also be presented at San Francisco’s Yerba Buena Center for the Arts, March 27–29, 2015.)

Celebrations culminate with another show at Zankel Hall on May 2, when Ensemble members past and present will perform compositions spanning Ms. Monk’s entire career, with timeless works from the ‘70s and ‘80s alongside contemporary creations including On Behalf of Nature, impermanence and mercy.

A modern icon of the performing arts, Monk is a pioneer of what is now called “extended vocal technique” and “interdisciplinary performance,” and has been hailed as “a magician of the voice” (The New York Times) and “one of America’s coolest composers” (Time Out New York). Her work has been presented by BAM, Lincoln Center Festival, Houston Grand Opera, London’s Barbican Centre and at major venues in countries from Brazil to Syria. Among her many accolades, Monk has received a MacArthur “Genius” Award, two Guggenheim Fellowships, three “Obies,” and two “Bessie” awards for Sustained Creative Achievement. She holds honorary Doctor of Arts degrees from Bard College, the University of the Arts, The Juilliard School, the San Francisco Art Institute and the Boston Conservatory. Recent honors include her naming as an Officer of the Order of Arts and Letters by the Republic of France and as the 2012 Composer of the Year by Musical America. Monk is also one of NPR’s “50 Great Voices” and has received a 2012 Doris Duke Artist Award and a 2011 Yoko Ono Lennon Courage Award for the Arts.

“Night” was commissioned by The House Foundation for the Arts with funds provided by the Mary Flagler Cary Charitable Trust and the National Endowment for the Arts.

Commissioning funds for the development of “On Behalf of Nature” were provided by The Brooklyn Academy of Music for the 2014 Next Wave Festival, ASCAP/American Society of Composers, Authors & Publishers, The National Endowment for the Arts, New Music USA, and NYSCA. Developmental support through residencies for “On Behalf of Nature” was generously provided by UCLA CAP, Centre Culturel Andre Malraux (Vandoeuvre-les-Nancy, France), Le Théâtre De Lorient, Centre Dramatique National (Lorient, France), Park Avenue Armory, Duke University, and Roulette Intermedium.