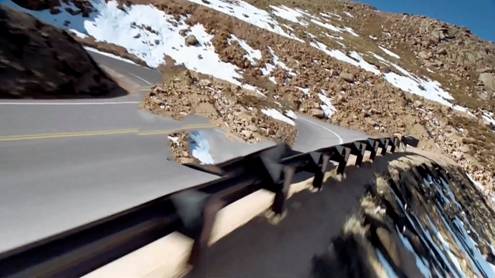 (New York, N.Y.) February 25, 2014 — March’s Midnight Moment, a presentation of the Times Square Advertising Coalition (TSAC) and Times Square Arts, features artist Zach Nader’s film optional features shown, examining what happens when the product for sale is a mere ghost and the background comes to the foreground. The video will premiere on Times Square’s billboards just before midnight on Saturday, March 1st, and play every night throughout March from 11:57 p.m.–midnight. For March’s Midnight Moment, TSAC and Times Square Arts have partnered with Moving Image, a video, film, and new media art fair that will take place March 6-9, 2014, at the Waterfront Tunnel event space in Chelsea.

Nader’s film is comprised of short segments of car commercials in which the text and representations of cars and people have been digitally removed. Nader misuses a software tool meant to aid in the removal of minor imperfections, and the resulting visuals reflect upon the scripted nature of image creation and editing. The all context/no content of the video points to the reliable nature of product choice and advertisement.

“I am interested in what is left after the impetus for creating the initial product is removed from the videos. What value remains?” said artist Zach Nader.

“It’s exciting for an emerging artist, who is appropriating new technologies and inventing creative ways to dialogue about consumerism, to have access to the most highly-visible and appropriate platform,” says Sherry Dobbin, Times Square Arts Director.

Toby Sturek, Chairman of the Times Square Advertising Coalition, said, “The signs of Times Square are known all over the world as the best place to display new and exciting advertising content.  We are delighted to showcase Zach Nader’s unique film, which actually removes the products from commercials.  March’s Midnight Moment will surely capture the attention and interest of the Times

Square shoppers and visitors below.

“Moving Image is very excited to have an artist from this year’s New York fair selected for the Midnight Moment program,” said fair co-founders Edward Winkleman and Murat Orozobekov. “Zach Nader’s work is perfect for the Midnight Moment project, and we’re thankful to him and Microscope Gallery for proposing what we are sure will stop thousands of people in their tracks each night through March.”

The following digital screens are participating in the March Midnight Moment:

Midnight Moment is the largest coordinated effort in history by the sign operators in Times Square to display synchronized, cutting-edge creative content on electronic billboards and newspaper kiosks throughout Times Square every night. The program premiered in May 2012 and is organized and supported by the Times Square Advertising Coalition in partnership with Times Square Arts, the public art program for the Times Square Alliance, with additional partners of participating sign holders and artists.

Zach Nader is a Brooklyn-based artist working primarily with video and photography. In his work, Nader alters existing imagery through the misuse of common editing software tools. His inquiry addresses the ways in which elements of anticipation and loss continue to live and transform through image creation and consumption, both personal and public. Since his arrival in New York in the summer of 2012, Nader’s works have exhibited nationally and internationally, including most recently in Israel and Australia. Zach Nader was born in Dallas, Texas and received his Master of Fine Arts in Photography from Texas Tech University in 2012. He is represented by Microscope Gallery in Brooklyn, NY. http://zachnader.com/

Times Square Arts, the public arts program of the Times Square Alliance, collaborates with contemporary artists to experiment and engage with one of the world’s most iconic urban places. Working with artists and cultural institutions, the Arts Program creates dialogues with Times Square and all of its physical and mythological manifestations. Through the Square’s electronic billboards, public plazas, vacant areas and popular venues, and the Alliance’s own online landscape, Times Square Arts invites leading contemporary creators to help the public see Times Square in new ways.  Times Square has always been a place of risk, innovation and creativity, and the Arts Program ensures these qualities remain central to the district’s unique identity. Generous support of Times Square Arts is provided by ArtPlace America and ArtWorks. Visit www.TimesSquareNYC.org/artsfor more information. Follow us on Twitter @TSqArts and Instagram http://instagram.com/tsqarts

Moving Image was conceived to offer a viewing experience with the excitement and vitality of a fair, while allowing moving image-based artworks to be understood and appreciated on their own terms. Participation is by invitation only. The newly formed Moving Image Curatorial Advisory Committee for New York 2014 is inviting a selection of international commercial galleries and non-profit institutions to present single-channel videos, single-channel projections, video sculptures, and other larger video installations. http://www.moving-image.info/