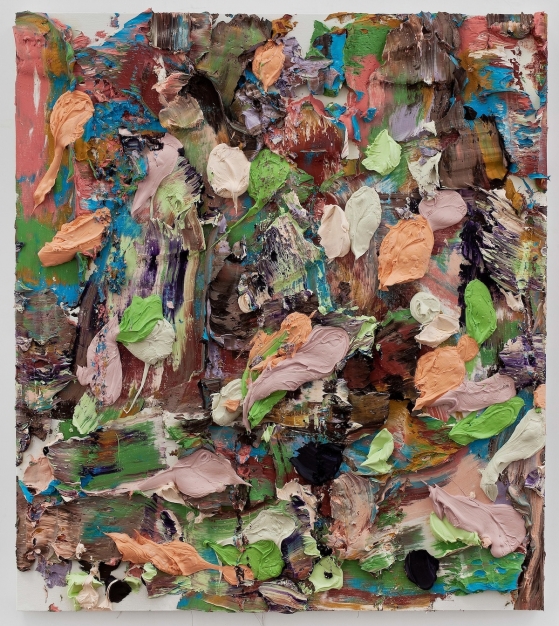 New York, NY…Beginning February 28, 2014, Luxembourg & Dayan will present THICK PAINT, an exhibition of works by Jean Fautrier (1898-1964), Franz West (1947-2012), and Zhu Jinshi (b. 1954). Representing dramatically different cultural contexts, generations and formal approaches to the making of art, all three artists are nevertheless united by a preoccupation with the spatial possibilities of impasto and the psychological charge that profoundly heavy, troweled, shoveled and carved pigment can generate. With the exhibition THICK PAINT, Luxembourg & Dayan will bridge distinct post-war aesthetics and conceptual ruptures, from the French Art Informel to the emergence of Chinese avant-garde, through works that oscillate between painting and sculpture, and suggest fresh artistic territory that defies both categories.

At the heart of the exhibition are works by French painter, illustrator, printmaker and sculptor Jean Fautrier. Fautrier’s paintings from the late 1920’s, represented in the exhibition by Mort du Sanglier (1927), anticipate his later groundbreaking investigations into modeling and sculpting

the painterly surface. Fautrier applied oil paint to canvases that had been covered in a layer of papier mâché, creating dry fresco-like surfaces into which he then incised or scored his imagery. By cutting into the painted surface, the artist empowered blank canvas to define the parameters of his still lifes. Fautrier’s later, somber Otage paintings (1942-45) capture the sensation of extreme physical suffering. In these works, representation breaks down as if registering the traumatic disintegration of society’s structure in the aftermath of World War II. It was through his application of thick paint in haphazard gestures – marks that the art historian Benjamin Buchloch described as “unconscious deposits” — that Fautrier was able to “drain the painterly mark and substance of all residues of mimetic life.”

By the 1950’s, Fautrier had fully developed his painterly process of Haute Pâte (“high paste”), using concoctions of paint, plaster, gesso, ink, and paper to extend conventional painting into a more purely abstract realm. In these works, tensions between surface and texture, methodical construction and all-out assault, are emblematic of European post-war abstraction and the movement of Art Informel, whose other practitioners included Jean Dubuffet and Alberto Burri.

THICK PAINT layers the work of Austrian artist Franz West onto that of Fautrier. Deliberately eschewing the conceptual and performative provocations of his contemporaries in the Vienna Actionist group, West concentrated on reimagining the depth of painterly surfaces in the form of three-dimensional structures. His early works were primarily focused upon a process that involved the application of paint to collages composed of magazine cut-outs, a process that eventually led to the artist’s mature, sculptural pâpier maché creations and his engagement of

actual space with paint. In the monochromatic surfaces of such later works, viewers recognize the finishes of West’s early collages. In both bodies of work, West grappled with perspectival issues and struggled with the representation of space and distance. Believing that artworks should be useful and used, he devoted himself to the task of translating shapes found in abstract two-dimensional paintings into three dimensions, often creating a hybrid art that is painting, sculpture and furniture – but none of these things exclusively.

Finally, THICK PAINT includes a series of works by Chinese artist Zhu Jinshi, who heaps paint upon his canvases with spatulas, shovels and knives to achieve astonishing sculptural presence. Jinshi’s works resist classification, both paying homage to and pushing against the confines of traditional Chinese art while simultaneously highlighting the interconnected relationships between painting and sculpture within Western art. The first examples of Zhu’s mature work were produced in tandem with the onset of China’s Cultural Revolution (Mao’s insistence that Chinese art reject both the historical Chinese style and capitalist inflected bourgeois ideologies in favor of social realism). The artist was unable to officially exhibit his work until joining the political activist art collective known as The Stars Group in 1979 (among other members were Ai Weiwei and Ma Desheng). The Group’s debut show in Beijing marked the first officially recognized public presentation of avant-garde art in China since the mid 1960s.

In the 1980s, Zhu was among the first post-Revolution generation of Chinese artists allowed to study abroad. In Berlin, where he was exposed to the Western art canon, he further developed a practice freighted with installation work. The lasting effects of this period are still felt in Zhu’s approach to painting; he always considers the object-ness of his work as its primary concern. The dramatic, volumetric properties of his surfaces are suggestive of the rough, earthy dimensionality of chipping shale, offering a connection between abstraction and historical Chinese landscape rendering, while the weight and density of the artist’s canvases render them more akin to sculpture than painting. In the pinks and light greens of Zhu’s distinctive palette (the artist applies pigments straight from the tubs without any mixing), one senses a distant kinship with West as well as echoes of the colors found in traditional Chinese ceramics.