Little Shop of Horrors at the New York City Center

Book and Lyrics by Howard Ashman; Music by Alan Menken

The Second Production of the 2015 Encores! Off-Center Season 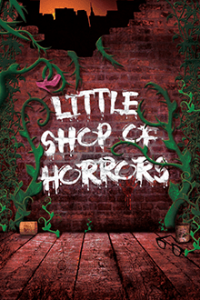 New York, N.Y., April 14, 2015 – Jake Gyllenhaal, Chuck Cooper and Taran Killam will join the previously announced Ellen Greene in the Encores! Off-Center concert production of Howard Ashman and Alan Menken’s Little Shop of Horrors, running July 1-2, 2015. NOTE: A third performance has been added at 2pm on Thursday, July 2 in order to meet ticket demand. The production will be directed by Dick Scanlan, with choreography by Patricia Wilcox. Jeanine Tesori is the Artistic Director of Encores! Off-Center, and Chris Fenwick is Music Director. The show will mark the musical theater debuts of both Gyllenhaal and Killam.

Little Shop of Horrors is a sci-fi musical about Seymour Krelborn (Jake Gyllenhaal), a hapless florist shop worker who pursues a doomed romance with his ditzy, lovable co-worker Audrey (Ellen Greene) by acquiring an R&B-singing plant (Chuck Cooper) that feeds on human blood. The production also stars Taran Killam as Audrey’s sadistic dentist boyfriend Orin Scrivello. An R&B girl group, The Urchins, provides commentary on the action and will feature Tracy Nicole Chapman, Marva Hicks and Ramona Keller.  Little Shop is based on Roger Corman’s 1960 black comedy film by the same name. With book and lyrics by Howard Ashman and music by Alan Menken, the show premiered Off-Off-Broadway in 1982 before moving Off-Broadway to the Orpheum Theatre, where it played 2,209 performances, winning the Drama Desk, Outer Critics Circle and Drama Critics’ Circle Awards for Best Musical.  It was revived on Broadway in 2003, playing 372 performances at the Virginia Theatre.

Tracy Nicole Chapman (Chiffon) was in the original Broadway casts of The Lion King, the 2002 revival of Into the Woods, the 2000 revival of The Music Man, The Who’s Tommy, The Life and Caroline, or Change. She also appeared on Broadway in How to Succeed… Her first national tours include Jelly’s Last Jam and Once on This Island, and she has toured with Jessica Simpson, Vanessa Williams and Heather Headley. Regional credits include Running Man. Her film and television credits include Across the Universe and “The Wrong Coast.”

Chuck Cooper (Voice of Audrey II) is a Tony Award winner for The Life. Other awards include the Lucille Lortel Award for The Piano Lesson; the San Diego Critics’ Circle Award for Two Trains Running; an Audelco Award for Caroline, or Change; and two Drama Desk nominations. He has been featured in 13 Broadway shows in every theatrical genre from Shakespeare to musical comedy. His most recent guest starring TV appearances include “House of Cards,” “Madam Secretary,” “Gossip Girl,” “Nurse Jackie,” and “Muhammad Ali’s Greatest Fight.”

Ellen Greene (Audrey) is perhaps best known for creating the lovable Audrey in the Off-Broadway, Los Angeles and London productions of Little Shop of Horrors; she reprised the role in the 1986 film made at Pinewood Studios in the UK. Ellen’s Broadway credits include Rachael Lily Rosenbloom and Don’t You Ever Forget It, Threepenny Opera (Tony Award nomination), The Little Prince and the Aviator, and Three Men on a Horse.  Some of her Off-Broadway credits include In the Boom Boom Room, The Sorrows of Stephen, The Nature and Purpose of the Universe and Teeth and Smiles.  Her many films include Léon: The Professional, Talk Radio, One Fine Day, The Cooler and Next Stop, Greenwich Village. Her TV credits include “Glory! Glory” for HBO, (Cable Ace Award nomination), “Dinner at Eight,” “Pushing Daisies” and “Heroes.”  In 2009, she played Miss Adelaide in the all-star Hollywood Bowl staging of Guys and Dolls. Ellen’s debut solo album In His Eyes was named the vocal recording of the year by Playbill, and this Thanksgiving she released a new Christmas album, Songs for a Winter’s Night, to rave reviews.

Marva Hicks (Crystal)’s Broadway credits include Motown the Musical; Caroline, or Change; The Lion King; and Lena Horne: The Lady and Her Music. She has appeared Off-Broadway in Thunder Knocking on the Door and The First Breeze of Summer. Regional work includes Thunder Knocking on the Door (Helen Hayes Award), Cuttin Up, The Women of Brewster Place (Suzi Award), Crowns and Sophisticated Ladies. She played Bess in the Zach Theatre’s Jazz/Blues production of Porgy and Bess (B. Iden Payne Award).  Her films include Labor Day, Virtuosity and Preaching to the Choir. She has toured with Whitney Houston, Stevie Wonder and Michael Jackson, and has recorded on Polygram Records.

Ramona Keller (Ronnette) made her Broadway debut inSmokey Joe’s Café and later toured with the show in Germany. On Broadway, she originated roles of in Caroline, or Change (also in London) and Brooklyn. Some of her regional credits include the female lead in Handel’s Messiah Rocks! , two productions of  Dreamgirls, Lonestar Love, Beehive, The Buddy Holly Story and the musical revue In Time with Hugh Jackmanin Las Vegas. Ramona has also performed with New York Pops, Sioux City Orchestra, Bay Atlantic Symphony and Grand Rapids Orchestra.

Taran Killam (Orin Scrivello) is currently in his fifth season on “Saturday Night Live.” His many celebrity impressions include Brad Pitt, Ashton Kutcher, Eminem, Paul Ryan, Piers Morgan and Rush Limbaugh.  Taran established his comedy career in Los Angeles as a main company member of the acclaimed comedy troupe The Groundlings and co-starred in the play Three Companeros at the Upright Citizens Brigade Theatre.  He has appeared on episodes of “How I Met Your Mother,” “Community” and “Scrubs,” and voices the character of Frantic in the Hulu original animated series “The Awesomes,” created by Seth Meyers. His feature-film work includes The Heat, Grown Ups 2 and 12 Years a Slave. He can also be seen opposite Brooklyn Decker in the upcoming film Casual Encounters. In 2013, Taran released “The Illegitimates,” a comic book miniseries focusing on a team of illegitimate children tasked with replacing their father, a James Bond-esque superspy.

Howard Ashman and Alan Menken (Music, Lyrics, and Book) first teamed up in 1978. Their first collaboration, God Bless You Mr. Rosewater, opened Off-Broadway in 1978 and was followed by the hugely successful Little Shop of Horrors in 1982.  Ashman and Menken wrote the music and lyrics for the Disney films The Little Mermaid and Beauty and the Beast.  Howard Ashman became ill during the creation of the Disney film of Aladdin, and died in 1991, before the film was released. Three of his songs are in the film and the current Broadway show.  Ashman and Menken’s many hit songs include “Under the Sea,” “Beauty and the Beast,” “Be Our Guest,” Arabian Nights” and “Little Shop of Horrors.”

Dick Scanlan (Director) co-authored Everyday Rapture with and for Sherie Rene Scott.  He received 2010 Tony and Drama Desk awards for his work on Rapture, which was produced Off-Broadway at Second Stage and by the Roundabout Theatre Company on Broadway.  He wrote the book and lyrics for 2002’s Tony Award-winning Best Musical Thoroughly Modern Millie, with music by Jeanine Tesori.  His wholly rewritten version of The Unsinkable Molly Brown received rave reviews for its world premiere at the Denver Center Theatre Company in September 2014, directed by Kathleen Marshall.  Last year, Mr. Scanlan served as Script Consultant to the legendary Berry Gordy in connection with Motown The Musical.  Mr. Scanlan’s novel, Does Freddy Dance, was published in 1995 by Alyson Publications.  He has published numerous articles and essays in The New York Times, The New Yorker, Vanity Fair, and many other publications.

New York City Center’s Encores! Off-Center series has been called “a summer theater highlight” by Charles Isherwood of The New York Times and “my favorite new arts institution”by Linda Winer of Newsday.  The series presents Off-Broadway musicals that pushed creative boundaries when they were first produced. Filtered through the lens of today’s artists, these shows are presented not as historical documents but as living, vital works that continue to resonate with audiences.

New York City Center (Arlene Shuler, President & CEO) has played a defining role in the cultural life of the city since 1943. It was Manhattan’s first performing arts center, dedicated by Mayor Fiorello La Guardia with a mission to make the best in music, theater, and dance accessible to all audiences. Today, City Center is home to many distinguished companies, including Alvin Ailey American Dance Theater, City Center’s Principal Dance Company, as well as Manhattan Theatre Club; a roster of renowned national and international visiting artists; and its own critically acclaimed and popular programs. The Tony-honored Encores! musical theater series has been hailed as “one of the very best reasons to be alive in New York.” In summer 2013, City Center launched Encores! Off-Center, a series that features landmark Off-Broadway musicals filtered through the lens of today’s most innovative artists. Dance has been integral to the theater’s mission from the start — and dance programs, including the annual Fall for Dance Festival, remain central to City Center’s identity. Vital partnerships with arts organizations including Jazz at Lincoln Center and London’s Sadler’s Wells Theatre enhance City Center’s programmatic offerings. City Center is dedicated to providing educational opportunities to New York City students and teachers through programs such as Encores! In Schools and the Young People’s Dance Series. Special workshops cater to families, seniors, and other groups, while events such as the Fall for Dance DanceTalk series offer learning opportunities to the general public. In October 2011, City Center completed an extensive renovation project to revitalize and modernize its historic theater.