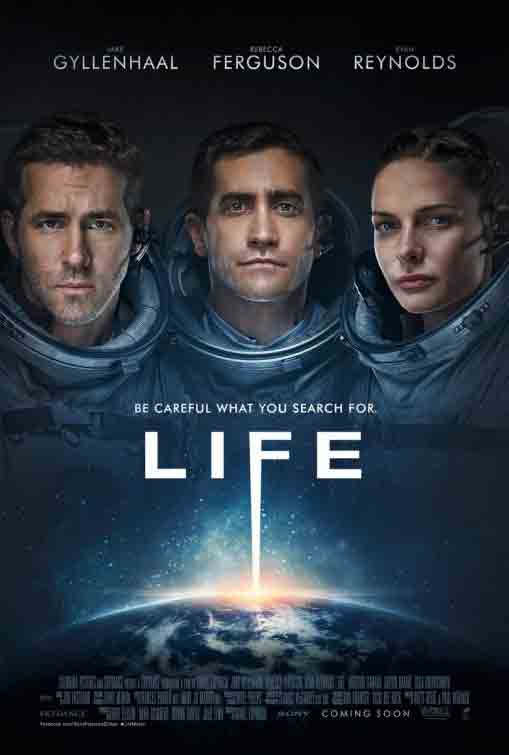 Clocking in at 1’ 44”, LIFE turns out to be a film I really wanted to like a great deal. Unfortunately I could only mildly give it a passing grade. Not that the film didn’t have its share of suspenseful moments. They existed in the way of scare inducing jolts. What left me wanting was its weak story line within which were instants that didn’t ring true, yet instead felt contrived and forced; not that the chemistry between the characters and actors or the lack thereof helped any. Surely it didn’t; and that there is what I find upsetting; well, that alongside some plot holes. As mentioned I really wanted to walk away from this film at least a foot off the ground in delight, instead I found myself shaking my head in disapproval.

Interestingly Ryan Reynolds shares a bit of direct or indirect history with writers Rhett Reese and Paul Wernich, both of whom worked on Deadpool as well as director Daniel Espinosa who also directed Safehouse; all films starring Mr. Reynolds. What I don’t get is how, with a primary cast of six of which two are well knowns and a third up and coming actress, one makes the decision to kill off perhaps your very best chance of holding on to the audience’s attention. That chance would have been Reynolds. He’s got such a wonderful magnetic personality in any film he stars in regardless of its own genre. How does one arrive at that sort of judgment?

Aside from all that’s been mentioned, the funniest thing though is its rewatchability factor. I honestly look forward to seeing it again once it hits cable so’s I can nitpick at its shortcomings even further. This, mind you, is coming from a big fan of the ‘Alien’ franchise despite having felt let down by half of their entries. Speaking of the devil, I’d be remiss if I didn’t mention one distinct similarity: Stupid irresponsible scientists. The very first Alien film did it, as did Prometheus. Of course there are plenty of other films which would fit the bill but I’ll leave it at that. I’m just wondering how long these filmmakers think they can go in as far as lazy filmmaking is concerned. Yes, I know, this real world of ours is rife with scientists making bad decisions in the name of science and research, but for God’s sake. This is Hollywood and Fiction films are not real. Thus, it’s up to them to come up with a credible story line instead of relying on the same regurgitated story scheme.

In the end, ‘and yes, literally at the end of the film there appeared to be an opening for a possible sequel. I’m hoping they actually go that route and end up coming up with something superior to this attempt. ‘Life’ certainly could have been something great, alas it wasn’t.