Opening In Theaters And On Demand / Digital HD, Friday, September 22, 2017 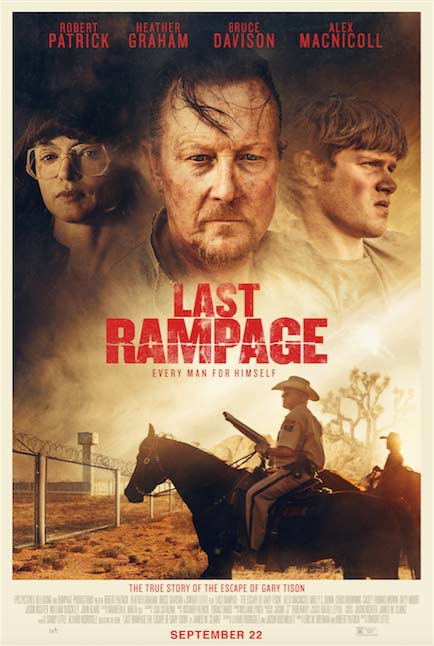 Based upon the nonfiction work, ‘LAST RAMPAGE The Escape of Gary Tison’ by James W. Clarke is the disturbing tale of Tison’s murderous charge after breaking out of Arizona State Prison with the help of his three sons; Rick, 18, Raymond, about 19, and Donald, 22.

Tison and fellow escapee, Randy Greenawalt, had been serving life sentences for first degree murder. The two had been brought out from their cells for visits when Tison’s sons had shown up with revolvers and sawed-off shotguns, thus freeing the two without a shot being fired. It’d be assumed that they’d gotten some inside-help. As for how they were able to bring in that sort of firepower, a little bit of research reveals how informal picnics were allowed for family visits, thus the boys took advantage of that by bringing along the ice chest in which the arms were hidden.

In the ensuing death spree that would last days, the group then travel with the supposed goal of reaching Mexico for safety away from the authorities. Tison and Greenawalt would end up killing Marine Sgt. John Lyons, his wife, Donnelda, their 22-month-old infant and Lyon’s 15 year old niece; as well as, in a separate occurrence, newlyweds James and Margene Judge. In each instance they would have done so for the sake of stealing the victims’ vehicles.

The group would finally encounter the hands of justice after plunging through a roadblock. Driving the vehicle and dying at the scene, due to gunshot wounds, would be Donald Tison. The rest would be captured and later executed, except for Gary Tison who escapes into the desert, leading officials on a massive manhunt. His body would be found within a couple of days, presumably dead from exposure to the elements sans water or food.

So, there you have it, the story, as close to fitting inside a nutshell as it could possibly be. As for the film?

‘Last Rampage’ is a powerful retelling that doesn’t let up from the beginning moments of the film to near the very end. One is caught up in this world of evil which appears to go hand in hand with Tison’s mindset; filled with a total disregard for life and humanity. It’s a work that doesn’t pull punches and depicts the monstrously wicked acts as coldly as, one can only imagine, they were carried out. This work is as raw as they come and emotions of the positive kind have no place within; and that would be a good thing considering the subject matter.

The film stars Heather Graham, Bruce Davison, Chris Browning and Robert Patrick, whom we’ve a great deal to thank for his portrayal of Gary Tison. Honestly, everyone involved did a fine job of carrying out their roles nary the slightest false note. Kudos to the involved filmmakers for doing such a fine job.

Below, is a quick image gallery of stills from the film.

You can view the trailer here…

If you’d like pursue some further reading then please consider the following:

MAKING A RUN FOR IT, book review :: New York Times

Pure Evil: The True Story of the Tison Gang :: azcentral

Directed by and Co-written by