Kill Me Please – A Film Review 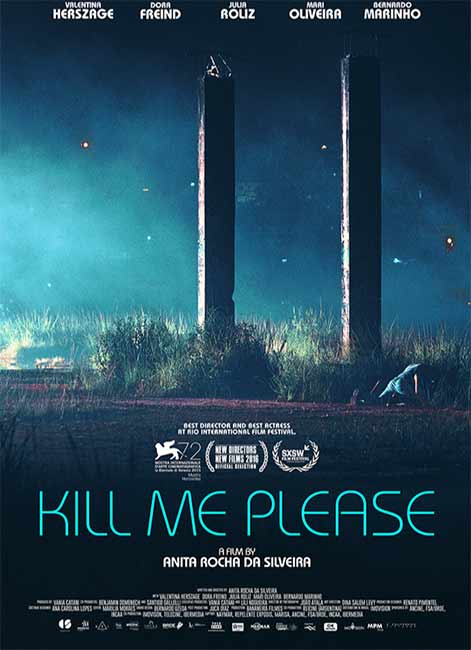 From Brazilian director and writer, Anita Rocha da Silveira comes her first feature film, ‘Kill Me Please’. A story centering on the lives of a group of teens as they respond to the horrible string of murders taking place in their town.

Since the 1970s, American slasher films, of which there’ve been a great many, have often had that odd mix of sexual desire and horror. A combination which many might say go hand in hand like milk and cookies. It’d appear that Silveira’ s intention was to explore that cinematic route through this film; yet unlike those other works we’re not confronted with the actual violence. Rather, we’re shown what the teen characters see, the news and occasional aftermath of the killings; and therein lies the film; their responses to what’s happening in the world around them. For one or more, the line between reality and the fascination with sex and horror will blur.

Honestly speaking, the film was extraordinarily tedious to watch, what with its unusually slow pace. Not that the film was a catastrophe, it wasn’t. The filmmaker struck gold with this cast of actors, all of which appeared very comfortable in their roles. Silveira herself seems to have quite the grasp of that which occupies the average teen mind. From angst and insecurity to sexual desires and other odd preoccupations, it’s all there.

However, it’s the story flow that suffers. Overly extended stills and visuals of the main character Bia (played by Valentina Herszage), which I can only imagine were meant to convey a transitioning state of her mind, made ‘Kill Me Please’ feel more like an art film. These were the sorts of scenes which I’d have otherwise associated with a psychedelic soundtrack; which thankfully never came. Not that there’s anything wrong with having a visual flare. It’s not, and it’s something Silveira has plenty of. It’s just that they leant an awkward and disjointed feel to the film. These weren’t the only visual flaws encountered but I’ll leave it at that.

There’s no question in my mind that Anita Rocha da Silveira has talent. With more experience I see her achieving great works down the road and, for that reason, I look forward to learning about her future and seeing how her style evolves.

The Metropolitan Museum of Art Kicks Off Its 150th-Anniversary Year by Inviting All to Share Their Own Met Stories Met Stories includes a monthly video series and an opportunity...
Read more
Event