On January 31, 2020 the 9/11 Memorial & Museum, located in Lower Manhattan’s WTC complex, revealed their newest temporary exhibition titled ‘K-9 Courage’ in honor of dogs that participated in the emergency response to the attacks of September 11, 2001.

K-9 Courage, the latest special exhibition at the 9/11 Memorial Museum, honors the hundreds of dogs who responded to all three 911 attack sites, searching the wreckage for survivors and victims and providing comfort to responders and 9/11 families. Included within the exhibition is archival photography of K-9 teams working at their respective locations in the days following the attacks along with portraits of dogs in their retirement taken by Dutch photographer Charlotte Dumas. As well, are seven artifacts, including a collar worn by North Tower survivor Michael Hingson’s guide dog Roselle and a brush used by Port Authority Police Department’s Lieutenant David Lim to groom Sirius, his K-9 partner, who was killed in the attacks.

The exhibition can be found in museums’ South Tower Gallery and will be on view until Spring/Summer 2021.

On February 1, 2020, the day following the opening, the museum held a family friendly event which featured dog demonstrations, film screenings and arts & crafts. Another posting will soon come in respect to that event as well as other related items.

Photos taken at the Exhibit:

Soon after the attacks on Lower Manhattan alert requests were sent out to which innumerable volunteers from near and far answered. One of them was Fire Department Paramedic Erick Robertson of Oakhurst, California and his friend Porkchop, an Australian shepherd search & rescue dog. Mr. Robertson, upon learning of the need for volunteers answered the call. Due to the restriction on civilian air travel at the time, he and Porkchop had to drive across America in order to reach NYC. They assisted with recovery activities at Ground Zero for two months. In that month of September in 2001 the Wall Street Journal ran an article “Porkchop Is Among Hero Dogs Combing Trade Center Rubble” honoring this canine hero.

Mr. Robertson’s non-profit organization 9/11 Remembered Traveling Memorial is a memorial dedicated to traveling across the country to share the history and artifacts pertaining to the events of September 11, 2001. 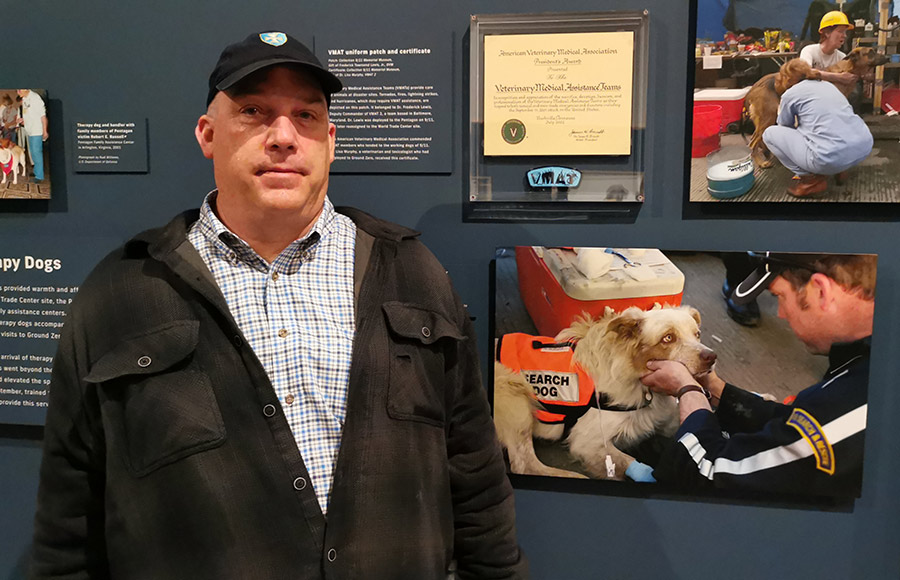 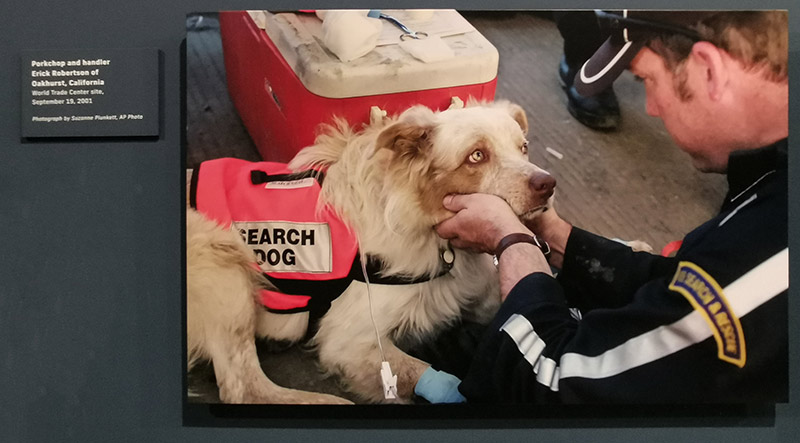 To facilitate the dog’s search of the North Tower collapse, golden retriever Riley was transported in a Stokes basket 60-70 feet above the debris field. 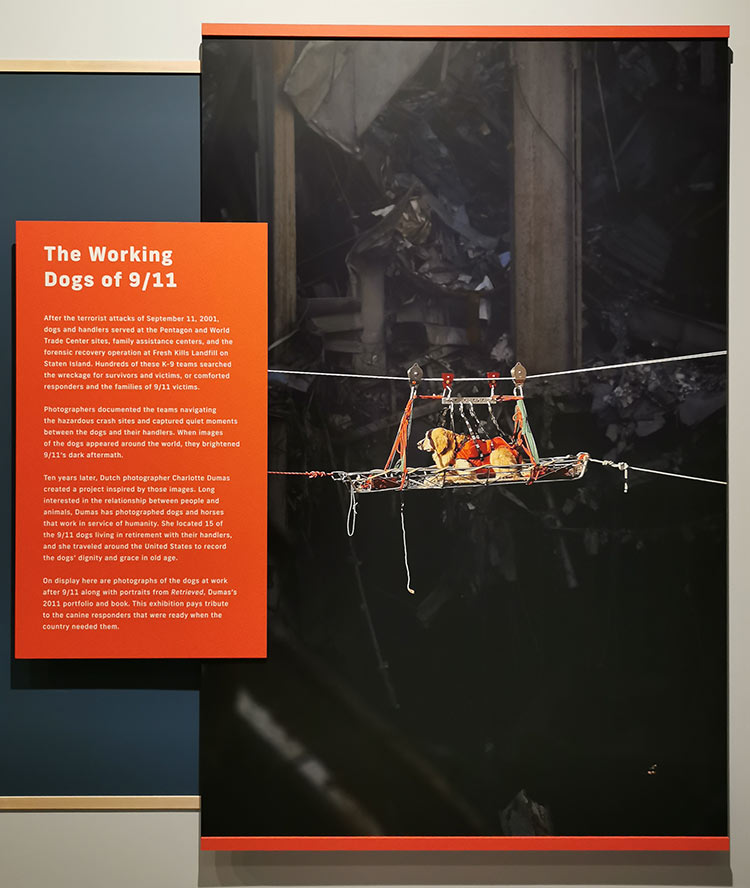 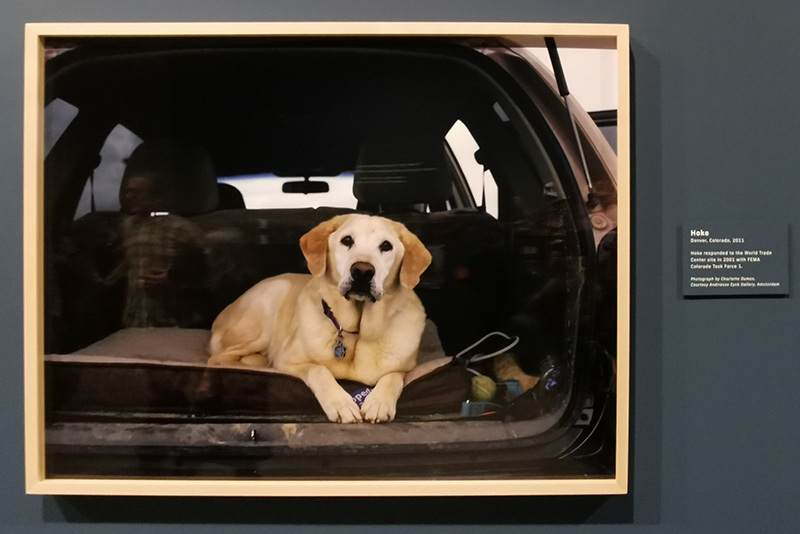 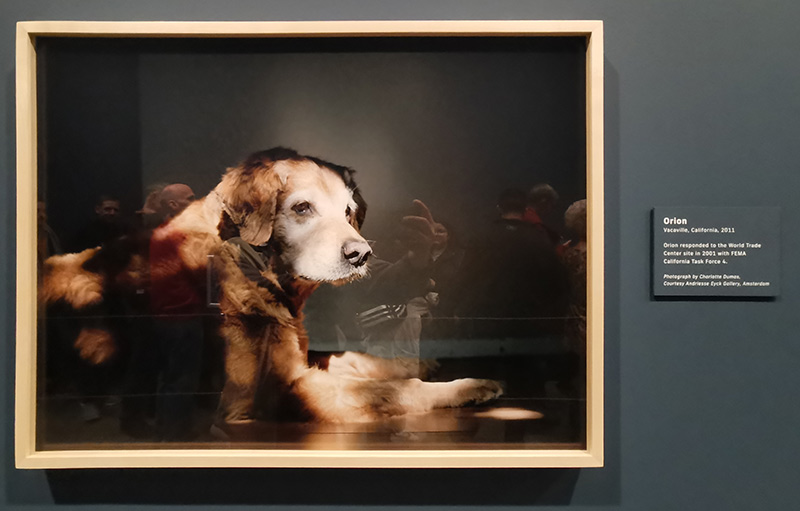 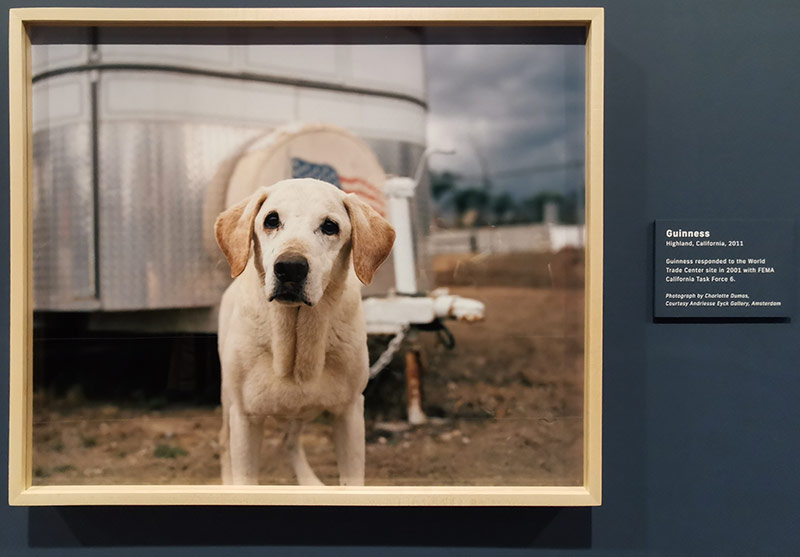 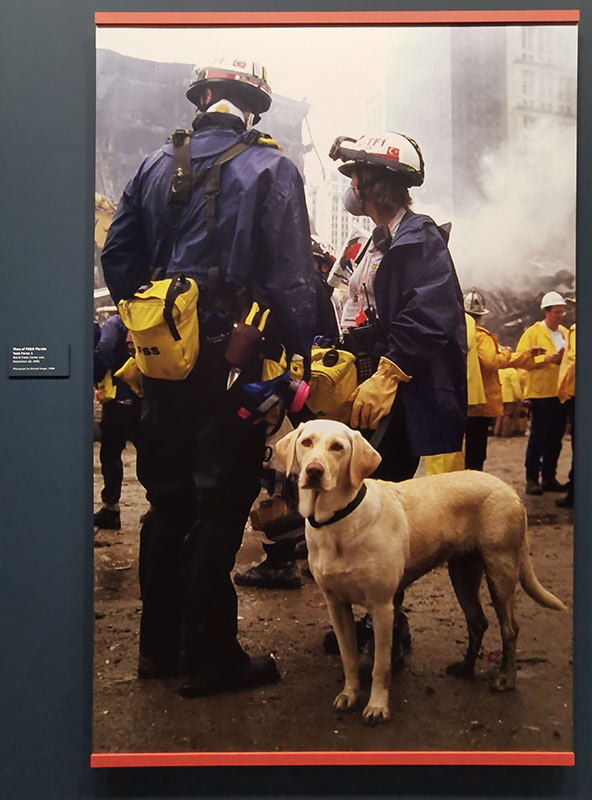 Law enforcement officials responding to the World Trade Center site sought assistance from Louisville, Kentucky-based police officer Ronald Moser and his bomb-sniffing dogs, Ajax and Laika. Moser and his dogs searched for explosives potentially concealed in supplies donated to the rescue and relief efforts or in vehicles. The team also inspected ferries that transported dignitaries and the families of 9/11 victims to Ground Zero. The dogs were issued their own photo badges identifying them as official responders. 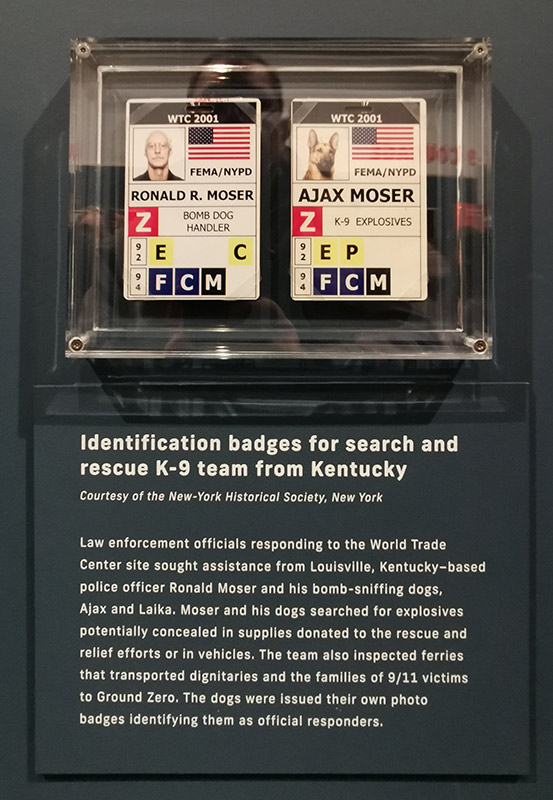 Placards at the exhibition read:

After the terrorist attacks of September 11, 2001, dogs and handlers served at the Pentagon and World Trade Center sites, family assistance centers, and the forensic recovery operation at Fresh Kills Landfill on Staten Island. Hundreds of these K-9 teams searched the wreckage for survivors and victims, or comforted responders and the families of 9/11 victims.

Photographers documented the teams navigating the hazardous crash sites and captured quiet moments between the dogs and their handlers. When images of the dogs appeared around the world, they brightened 9/11’s dark aftermath.

Ten years later, Dutch photographer Charlotte Dumas created a project inspired by those images. Long interested in the relationship between people and animals, Dumas has photographed dogs and horses that work in service of humanity. She located 15 of the 9/11 dogs living in retirement with their handlers, and she traveled around the United States to record the dogs’ dignity and grace in old age.

On display here are photographs of the dogs at work after 9/11 along with portraits from Retrieved, Dumas’s 2011 portfolio and book. This exhibition pays tribute to the canine responders that were ready when the country needed them.

Search and rescue dogs often work off-leash and without collars in order to maneuver freely. They respond to voice commands and hand signals, and they alert their handlers to potential finds by barking or sitting down.

Dogs working at Ground Zero had access to around-the-clock professional veterinary care. Veterinarians examined them before and after their shifts, bathed them, rinsed their eyes and noses, and treated injuries, such as cuts to paw pads. Veterinarians also traversed the hazardous site looking for and treating signs of canine dehydration and exhaustion.

Veterinary responders affiliated with the American Society for the Prevention of Cruetly to Animals (ASPCA), the Suffolk Country (New York) SPCA, and the Animal Medical Center worked alongside those responding from around the country. High-level veterinary care was also provided to dogs working at Fresh Kills and the Pentagon.