Jurassic World is One Helluva Ride despite… – A Review

Jurassic World is One Helluva Ride despite… – A Review 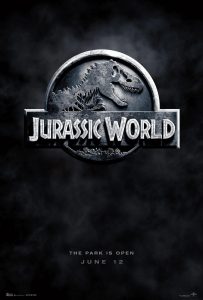 We’d managed to catch the early morning matinee showing of Jurassic World at the Times Square AMC theater and I’ve got to say it’s a helluva ride! Not that I’d give it a raving pass since it wasn’t without its share of nitpick-worthy faults; something I’ll get to in a moment. True to the sort of intense action packed fare some of us fans of previous Jurassic servings have been used to, this film serves on all intense action packed fronts. It’s the same old familiar odd mix of PG styled antics and horror rolled into one. Folks getting chomped on midsection with the occasional blood splatter is the standard norm when it comes to any of these flicks. Throw in the obligatory John Williams score and the expected list of characters bound to bite the bullet and you’ve got another entry in the Jurassic franchise; since let’s face it, within the first 20 or so minutes of any of these films we’ve usually a good idea who’ll be served up as dinosaur kibble by the movie’s end.

In true Spielberg fashion the film’s got its share of blatant product placements. Something which honestly doesn’t bother me too much but it’s interestingly ironic how they’ll show up around the same length of time spent explaining the theme park’s need to get the most buck for their bang through a ‘bigger and badder is better’ mentality for the sake of maintaining park attendance. What I can’t figure out is how many Mercedes does it take to run a park this size? I get it, I get it! I need to buy myself a Mercedes!…just hold still whilst I whip out my checkbook. Talk about commercialized overkill.

What would a return to this world be without a nod or two to the original, aye? Many of you might remember Dr. Henry Wu, reprised by BD Wong, who makes an appearance in this installment. There’s also a scene with two of the leading roles, played by Nick Robinson as Zach and Ty Simpkins as Gray, stumbling upon the location of the original Jurassic Park’s last scene wherein a T Rex roars amidst a falling banner. This film ends in similar fashion mind you. Might I also mention how these two kids have probably cemented their futures in Hollywood for at least the next few years, what with the box office numbers this film’s pulled in? Over $300 million as of this writing. Keep in mind that Mr. Robinson is 20 years of age now despite his childlike appearance and Ty Simpkin’s got plenty of previous acting roles under his belt already.

Speaking of actors, Chris Pratt was the only other actor, aside from those just mentioned, who helped make the film watchable from an acting standpoint. Everyone else could just as well have been replaced by…well, anyone else. Honestly, the rest of the cast of characters were annoying to say the very least. I won’t even go into how annoying; they simply were.

I’d mentioned nitpicking faults earlier and well, the most brazen one would be the level at which I needed to suspend my disbelief. It had nothing to do with the credibility of the graphics and such since regardless of all the CGI used I was highly convinced and impressed by the chase scenes and monsters’ interaction with the real world. Nary a visual moment felt false to me. Too bad the same couldn’t be said of the ridiculous plot devices. One would think that any theme park as ambitious and technically driven as Jurassic World would have a decent communication system. You’d also think they would have anticipated all the possibilities of things going wrong. Alas the creators of this film would have us believe that the park was created and run by total imbeciles since that’s the exact setting they’ve placed in front of us; or maybe they were taking us, the audience, as the dimwitted ones…hoping we’d not notice? Of course one could always consider crediting them for trying to make a social commentary on the recklessness of corporate greed and scientific advancement at all costs, but jeez louise, what an overstatement! No really! What the plot and good portions of the dialogue amount to is lazy story-telling at its worst.

Needless to say we don’t take in a motion picture like this for its prize winning performances since the only acknowledgement it’ll ever get at the Academy Awards is recognition for its technical achievements at best. Heck, we all know what we’re in for at the theater and this film delivers on those counts. In spite of all the silliness it’s the sort of film I’m looking forward to adding to my Blu-ray collection.