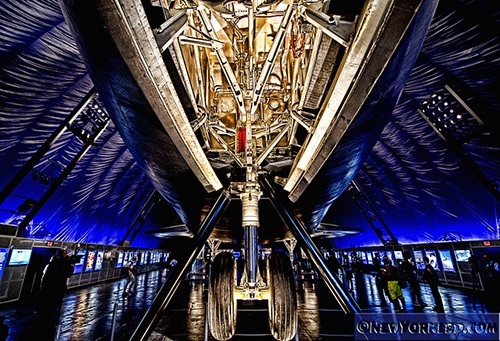 New York, NY (April 27, 2015) – The Intrepid Sea, Air & Space Museum held a ceremony and plaque unveiling that dedicated the space shuttle Enterprise to the fallen crews who gave their lives in pursuit of space exploration on the Apollo 1, Challenger and Columbia space missions. Participating in the ceremony were the families of the crew members of Apollo 1, Challenger and Columbia, including those of commanders Virgil I. “Gus” Grissom, Francis R. “Dick” Scobee and Rick D. Husband; NASA Administrator Charles Bolden; Intrepid Museum President Susan Marenoff-Zausner; former astronaut Mike Massimino, now the senior advisor of space programs at the Intrepid Museum; and a group of New York City public school students.

As part of the speaking program, a special message from the International Space Station (ISS) was shown, and remarks were given by former NASA astronaut and the Intrepid Museum’s Senior Advisor of Space Programs Mike Massimino. Intrepid International Space Station Challenge (I2S2C) student Griffin Fuetsch joined Massimino for the reading of the Dedication Plaque Inscription, followed by a performance of “America the Beautiful” by the Professional Performing Arts High School Choir in partnership with the National Chorale. The dedication event concluded with the unveiling of the plaque.

“It is our great privilege to stand alongside the families of the brave crew members of Apollo 1, Challenger and Columbia as we dedicate space shuttle Enterprise to their heroism, vision, passion and sacrifice,” said Marenoff-Zausner. “The spirit of the men and women of these missions will live on, right here, in this magnificent spacecraft and in the programs and exhibits it motivates, now and in the future.”

“It’s an honor to be here to recognize the crews of Apollo 1, Challenger, and Columbia as we dedicate the space shuttle Enterprise in their honor. I thank the families of our fallen crew mates for joining us. Know that we will never forget your loved ones, and that we are building on their legacy even now to do the great things in the future toward which they strove,” stated Bolden.

Following the dedication event, 200 middle school students from five New York City public schools showcased the experiments they designed, one of which will be flown into space to the ISS as part of the Intrepid International Space Station Challenge (I2S2C), a joint partnership between the Intrepid Museum, the Student Spaceflight Experiments Program and the Ramon Foundation, founded by Rona Ramon in honor of her late husband. Participating schools are Brooklyn Science and Engineering Academy (Brooklyn), Institute for Collaborative Education (Manhattan), P.S./I.S. 30 Mary White Ovington (Brooklyn), I.S. 204 Oliver Wendell Holmes (Queens) and The Urban Assembly Institute for New Technologies (Manhattan).

The National Center for Earth and Space Science Education’s Student Spaceflight Experiments Program is an on-orbit educational research opportunity enabled through NanoRacks, LLC, which is working in partnership with NASA under a Space Act Agreement as part of the utilization of the International Space Station as a National Laboratory.

“Today’s event truly represents the mission of the Intrepid Sea, Air & Space Museum—to honor our past and inspire our future,” added Marenoff-Zausner.

The space shuttle Enterprise was NASA’s first orbiter, a prototype that conducted critical tests within Earth’s atmosphere in 1977. These pioneering tests paved the way for the successful orbital flights of later shuttles, beginning with the first flight of the space shuttle Columbia in 1981. Sections of Enterprise’s left wing leading edge and left main landing gear door were used as test articles for the Columbia investigation, which led to uncovering the cause of the accident. Changes were then made that allowed NASA to continue the space shuttle program, including building the International Space Station and completing service missions to the Hubble Space Telescope. Following the retirement of the shuttles in 2011, NASA awarded Enterprise to the Intrepid Sea, Air & Space Museum.