Spoilers to come; none of which couldn’t easily be learned of through various sources. 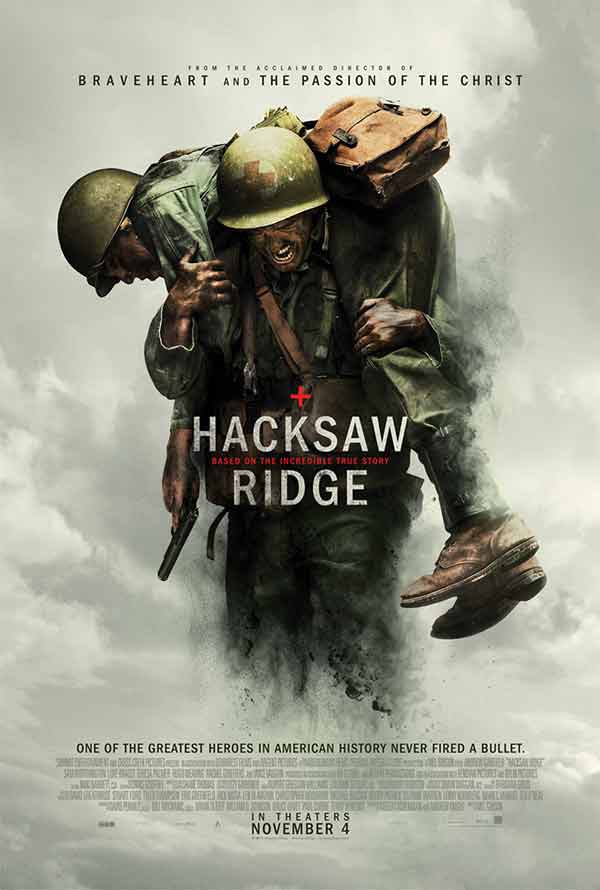 I went in seeing this film with nary the slightest idea of the details to be found within except that it was about a World War II hero. If there were any mentions at the beginning that this was based upon a true story then I surely missed it.

What ensued was what I’d equate to a story told in more than one part. Portions which in my mind could’ve possibly stood independently as separate short films. The first hour or so focused upon the main character, Desmond Doss (Andrew Garfield). An emotional tale about his upbringing, family, and his future wife, Dorothy Schutte (Teresa Palmer); an account which will help explain the deep-rooted honor and convictions existing within the man; principles which will be at the very core of the film.

Following within the storyline would be his dealings with fellow soldiers in training and his disputes with military officers over his refusals to carry, handle or train on any weapons. Thereafter would be his and his fellow troopers’ combat experiences against the Japanese in the Battle of Okinawa.

The modeling of Doss’ own values would come from his own upbringing in a God fearing family and his own sworn commitment to never carry a gun; partially due to witnessing his father nearly shooting his own brother; an ideal strengthened by the story of Cain and Abel, as portrayed within a framed poster found in their home; artwork detailing the ten commandments.

Yet none of this would keep him from volunteering in the war effort in the name of honor. In Doss’ own words, he was not a conscientious object, but a conscientious cooperator. His wishes were to serve as a combat medic sans weapon. Yet the military had other things in mind for him. They assigned him to a rifle company wherein his own convictions would not be welcomed. It was done with the hopes that peer pressure might play a part in changing his way of thinking. Ostracized and ridiculed Doss, strong in his beliefs, continued on. Little would anyone realize the lengths and heights to which Doss’ heroics could and would reach. Little did they foresee the dozens of lives he’d end up saving. The man went on to be the first and only conscientious objector to win a Medal of Honor in World War II. It’s the story of a true hero.

If you find yourself, like me, unfamiliar with the fact this is based upon a true story, then you’ll think the second half, taking place in combat, as overly schmaltzy and unbelievable to a fault. That is, until you realize that this all actually did happen. Although some details were changed in the name of artistic license, and I suppose possibly due to time constraints in storytelling, most of the film appears to follow a genuine enough path as they pertain to Desmond Doss’ own life. I say that from the perspective of someone who’s watched an official documentary about the man as well as read a number of related items as well; the links to which are listed below.

As is often the case with Mel Gibson, Hacksaw Ridge bears a number of recurring elements and themes you’d be hard-pressed to not find in other films starring the actor or directed by him. A man fighting for honor in the face of great adversity would surely be one of them. Well that, plus violence. Lots and lots of violence.

With horrific displays of obliterated body parts torn from each other it stands to reason without the slightest contradiction that war is truly hell. If there were ever a film which managed to demonstrate that then this would be it! A fine job was done in the depiction of wartime’s horrors. The way things play out on the screen bring me to feel that there might be a Best Cinematography nomination in the film’s future. The transition mind you from the emotionally wrought first hour to the violent latter portions is hardly an abrupt one considering the time spent in between focusing on Doss’ defense of his own stance as a conscientious objector.

Come awards time I’m confident this film should earn Mr. Gibson a Best Director nomination. The chemistry between the entire cast works like magic. Not one single bit of interaction between any of the characters felt false; and there are actors aplenty. Teresa Palmer is a wonder to behold as she lights up every scene she appears in. Whether smiling, laughing or crying there’s no wonder Doss can’t keep his eyes off of her. This actress truly deserves a nomination methinks. Other worthwhile award considerations should include sound and editing at the very least; although I’m not fully sold on whether this film as a whole should get a best picture nomination.

In the end I’m happy to see Mel Gibson getting back into the swing of things with this film. It’s not his very best but it surely ranks in his top ten. Interestingly, I can’t help draw a parallel between him and Clint Eastwood. Both have spent years if not playing epic roles in violent films, then directing them; not that these sorts of films make up the majority of either one’s careers. Regardless, what comes to mind is Mr. Eastwood’s Gran Torino. I spent the bulk of that film half wishing his character would pull out a gun and save the day with his bad-assness; just as I did with Hacksaw Ridge. Hoping and half expecting Desmond Doss to finally pick up a rifle and making mincemeat of the enemy. Didn’t happen in either film; and just as Gran Torino bore great redemptive morals, that is, in as far as Clint Eastwood was concerned, so did this film, in relation to Mel Gibson. In its own special way, pacifism overtook violence in both films.

Below is a list of related links and sources should you wish to learn more about Desmond Doss and his story.

The True Story of Hacksaw Ridge and Desmond Doss: the Medal of Honor Winner Who Never Fired a Shot – People Magazine