After having postponed its reopening for months, Governor’s Island opened its doors to the public today. Having been a big fan of visiting the island for years now, yours truly couldn’t resist being one of the first ones to step foot upon the island on this first day of the 2020 season.

My round trip ferry ticket was a mere $3, admittedly a buck higher than last year’s fee. Tickets for Seniors are free.

Although, reservations are set for hourly departures the actual departing ferries aren’t running as one might think. I got to the Manhattan departure site (at the Battery Maritime Building) more than half an hour shy of my 1:00 pm departure slot. Yet, after having the ticket on my smartphone scanned, 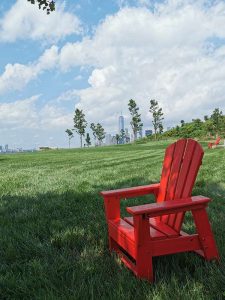 I was quickly ushered onto a boat and sent over to the Island in 10 minutes or less.

It was there that I spoke with a rep of the island who enlightened me a slight bit on the process. Turns out ferries were going out on a 15 minute basis on this first day and it was expected that they might be switching to 30 minute intervals. Seems like turnout wasn’t too high for this first day but, as would be expected, the coming weekend would be very busy.

Through their reservation system, which resembles that which I suggested in my proposal last month, the Trust for Governors Island is better able to control and limit visitor numbers as the city continues to recover from the COVID-19 Crisis.

What can I say about this day other than that which I might’ve said in the past? Everything outdoors that you were able to access in the past is available to you now.

Although, I’d suggest they increase the availability of hand sanitizers near the departure points at either end of the East River. If it’s available then I sure as heck didn’t see it. Don’t recall seeing anything on

board the ferry either.

While the Mayor’s busy having tens and hundreds of thousands of masks distributed throughout the city, having them handed out here as well would be a very good idea. I spotted enough individuals on the island without masks. Sure, there was signage reminding folks to social distance. How about reminding them to wear a facial covering?

Yes, this landmark site is mighty roomy with tons of space – but what about those on board the ferries? What about standing on line for one’s departure or for that matter, visiting one of the available dining spots?

Regardless, if you were a fan of the island in the past then you’ll be just as happy with it now. Just remember all the guidelines needed to keep yourself and others safe.

During today's tele-Press Conference, NY Governor Cuomo announced that, thus far, the state has administered over 6 million diagnostic COVID-19 tests since March. He also reported that nearly 59,000 tests were given yesterday. The number...
Read more