Governor Cuomo: “Grim Reaper Mitch McConnell…It’s Your State that’s getting Bailed Out, Not My State.”

Governor Cuomo to Self Proclaimed Grim Reaper Mitch McConnell, “It’s your state that’s getting bailed out, Not My State.”

New York Governor Andrew Cuomo would give Senate Majority Leader Mitch McConnell a piece of his mind today. It would be in response to recent statements by the Senator.

The Senator would accuse supposed ‘Democratic States’ of taking advantage of the COVID-19 Crisis by using the “Blue States Bailouts” to solve their economic problems. Problems which, according to Mr. McConnell, already existed prior to the start of the pandemic. The Senate Leader’s own government site press releases would have headings worded: “Preventing Blue State Bailouts”.

To cut to the chase, I’d like to first share the words the Governor uttered after having already ended his near 30 minute briefing. They would be the most hard-hitting set of words we’ve heard him speak to any other politician. He’d take a questions from the press, as is the norm, but then get back to Senator McConnell.

“Self Proclaimed Grim Reaper, Mitch McConnell. He represents the state of Kentucky, okay? When it comes to fairness, New York State puts much more money into the Federal Pot than it takes out. At the end of the year, we put into that Federal Pot $116 Billion Dollars more than we take out. His state, the state of Kentucky, takes out a $148 Billion more than they put in. So he’s a Federal legislator. He’s distributing the federal pot of money. New York puts in more money to the federal pot than it takes out. His state takes out more than it puts in. Senator McConnell, who’s getting bailed out here? It’s your state that is living on the money that we generate. Your state is getting bailed out. Not my state.”

Below is the portion of Governor Cuomo’s briefing which address the Senator only up to the point before he takes questions from the press.

Earlier, during his briefing:

Governor Cuomo, “Senator McConnell, who is the head of the Senate. You know, we’ve been talking about funding for state and local governments. It was not in the bill that the House is going to pass today. They said don’t worry, don’t worry, don’t worry the next bill. As soon as the Senate passed it, this current bill, Senator Mitch McConnell goes out and he says, “maybe the states should declare bankruptcy.” Okay? This is one of the really dumb ideas of all time. “

Yesterday, in an interview with Radio Talk Show Host Hugh Hewitt, McConnell would respond to the host’s questions regarding states going bankrupt. “Yeah, I would certainly be in favor of allowing states to use the bankruptcy route. It saves some cities. And there’s no good reason for it not to be available. My guess is their first choice would be for the federal government to borrow money from future generations to send it down to them now so they don’t have to do that. That’s not something I’m going to be in favor of.”

Keep in mind, for the sake of context, the portions of the interview concerning this subject clearly clarified how democratic states and their respective governors were at the center of the points being made.

Such was the case during the Senate Leader’s interview on the day prior with Bill Hemmer of FOX News. The Senator’s related press release outlines some of his transcribed words with a headline of “On Preventing Blue State Bailouts”: 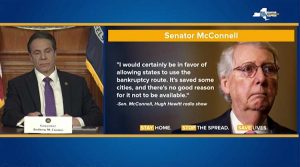 “What I’m saying is we’re going to take a pause here, we’re going to wait at least until May 4th which is the time we’re going to have everyone back in the Senate and clearly weigh, before we provide assistance to states and local governments, who would love for us to borrow money from future generations, to make sure that they have no revenue losses.”

“Before we make that decision, we’re going to weigh the impact of what we’ve already added to the national debt and make sure that if we provide additional assistance for state and local governments, it’s only for coronavirus related, coronavirus related matters.”

“Also, I want to speak to a point from our friends in Washington. Senator McConnell, who is the head of the Senate. You know, we’ve been talking about funding for state and local governments. It was not in the bill that the House is going to pass today. They said don’t worry, don’t worry, don’t worry the next bill. As soon as the Senate passed it, this current bill, Senator Mitch McConnell goes out and he says, “maybe the states should declare bankruptcy.” Okay? This is one of the really dumb ideas of all time. You know, I said to my colleagues in Washington, I would have insisted that state and local funding was in this current bill, because I don’t believe they want to fund state and local governments. Not to fund state and local governments is incredibly shortsighted. They want to fund small business, fund the airlines, I understand that. But state and local government funds police, and fire, and teachers, and schools. How do you not fund police, and fire, and teachers, and schools, in the midst of this crisis. Yes, airlines are important, yes small businesses are important, but so are police, and fire, and healthcare workers, who are the frontline workers. When you don’t fund the state then states can’t fund the services. It makes no sense to me.”

“It also makes no sense that the entire nation is dependent on what the governors do to reopen. We’ve established that it’s up this governor, it’s up to this governor, it’s up to this governor. But then you’re not going to fund the state government? You think I am going to do it alone? How do you think this is going to work? And then to suggest we’re concerned about the economy? States should declare bankruptcy? That’s how you’re going to bring this national economy back, by states declaring bankruptcy? You want to see that market fall through the cellar? Let New York state declare bankruptcy, let Michigan declare bankruptcy, let Illinois declare bankruptcy, California declare bankruptcy. You will see a collapse of this national economy. So, just dumb. Vicious is saying when Senator McConnell said, “This is a blue-state bail out.” What he’s saying is, if you look at the states that have coronavirus problems, they tend to be Democratic states. New York, California, Michigan, Illinois, they are Democratic states. So, if you fund states that are suffering from the coronavirus, the Democratic states, don’t help New York state because it is a Democratic state. How ugly a thought — I mean just think of what he’s saying. People died, 15,000 people died in New York, but they were predominantly Democrats, so why should we help them? “

“For crying out loud, if there was ever a time you’re going to put aside your pettiness and your partisanship and this political lens that you see the world through Democrat and Republican and we help Republicans, but we don’t help Democrats. That’s not who we are, it’s just not who we are as people. If there is ever a time for humanity and decency, now is the time. And if there was ever a time to stop your political obsessive political bias and anger, which is what its morphed into, just a political anger, now is the time and you want to politically divide this nation now? With all that’s going on? How irresponsible and how reckless. I am the governor of all New Yorkers, Democrat, Republican, independent, I don’t even care what your political party is, I represent you. We are all there to support each other. This is not the time or the place or the situation to start your divisive politics, it is just not.”

“That’s why look, our rule has been very simple from day one. There is no red and blue. There should have never been a red and blue when it comes to any important issue, but certainly not now. That’s not what this country is all about. It is not red and blue, it is red, white, and blue. When we talk about New York tough, we are all New York tough, Democrats and Republicans. We’re all smart, we’re all disciplined, and we’re all unified, and we’re all in this together and we understand that and that’s how we operate. We operate with love and we’re strong enough to say love. Say love is not a weakness. It is a strength and New Yorkers are that strong.”