Governor Cuomo: Go out for a walk in NYC but social distance – “this is almost an oxymoron”

NY Governor Andrew Cuomo would be asked about the 100 mile open street plan offered up by NYC Mayor de Blasio today. His response would be supportive of the Mayor’s plan and he would mention how he, in the past, had stated the need for such an idea.

“Go out for a walk in NYC but social distance – this is almost an oxymoron. It’s very hard to walk down a sidewalk in NYC and maintain social distance. So I had said, New York City should open Streets because remember in New York City the traffic is way down. Way, way, way down. I don’t know the percentage but it’s like night and day. You look at pictures of NYC you see one or two cars going.”

“So open streets – I spoke to the City Council Speaker about it, and the Mayor and they were – we did open streets and there was program that was operational. Apparently they had a disagreement about how it works. I said, figure it out. If they can’t figure it out, I’ll get involved. But you need to have streets that are open. You have less traffic. You need streets open so people can walk and socially distance. You can’t do that on the sidewalk – and there has to be a way to close street ‘cause you have no cars. You have no cars, you don’t need as many streets. There’s a direct proportionality.”

The program the Governor is referencing to above is the Open Streets Pilot Program run by NYC Mayor de Blasio from March into the beginning of April. It was shortlived and not tested well enough. At the time, the Mayor would cite the lack of NYPD personnel needed to enforce these areas.

Yesterday, Council Speaker Corey Johnson would make a tweet stating how we would go to the Governor for leadership if the Mayor did not open the streets. This follows on the Speaker’s proposed bill for opening 75 miles of streets in the city.

We recall the Governor having made a statement back in March. That being the one he referenced in his statement today. On March 21, he visited New York City and he complained of unacceptable overcrowding despite the “New York on Pause” lock-down he’d mandated. During his COVID-19 Press Conference the following day he stated the following.

“I was in NYC yesterday. It was a pretty day. There is a density level in New York City that is wholly inappropriate. You would think there was nothing going on in parts of New York City. You would think it was just a bright, sunny Saturday. I don’t know what I’m saying that people don’t get. I’m normally accused of being overly blunt and direct and I take that. It’s true. I don’t know what they’re not understanding. This is not life as usual. None of this is life as usual. This kind of density, we talk about social distancing, I was in these parks – you would not know that anything was going on. This is just a mistake. It’s a mistake. It’s insensitive, it’s arrogant, it’s self-destructive, it’s disrespectful to other people and it has to stop and it has to stop now. This is not a joke and I am not kidding. We spoke with the Mayor of the City of New York and the Speaker of the City Council Corey Johnson. I told both of them that this is a problem in New York City. It’s especially a problem in New York City parks.”

“New York City must develop an immediate plan to correct this situation. I want a plan that we can review in 24 hours so that we can approve it. There are many options. You have much less traffic in New York City because non-essential workers aren’t going to work. Get creative. Open streets to reduce the density. You want to go for a walk? God bless you. You want to go for a run? God bless you. But let’s open streets, let’s open space – that’s where people should be, in open spaces areas, not in dense locations. There is no group activity in parks. That is not the point. We spoke about it the other day. Also I saw kids playing basketball yesterday. I play basketball. There is no concept of social distancing while playing basketball. It doesn’t exist. You can’t stay six feet away from a person playing basketball. You can, but then you’re a lousy basketball player and you’re going to lose. You just cannot do that.” 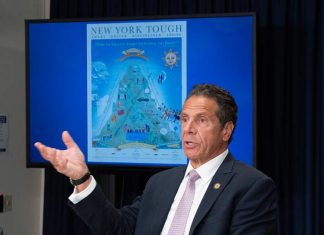