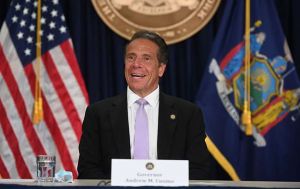 June 24, 2020 –New York City–New York Governor Andrew M. Cuomo, joined via video conference with New Jersey Governor Phil Murphy and Connecticut Governor Ned Lamont, today announced a joint incoming travel advisory that all individuals traveling from states with significant community spread of COVID-19 quarantine for a 14-day period from the time of last contact within the identified state. This quarantine – effective midnight tonight – applies to any person arriving from a state with a positive test rate higher than 10 per 100,000 residents over a 7-day rolling average or a state with a 10% or higher positivity rate over a 7-day rolling average. (Kevin P. Coughlin / Office of Governor Andrew M. Cuomo)

“Our approach has been vindicated and the phased reopening based on facts is working,” Governor Cuomo said. “I said from day one that the theory the virus should be handled politically can’t be done. The virus doesn’t respond to political theory – it responds to science and data. We’re going ahead with our metrics and our phased reopening, and five regions are set to enter Phase IV on Friday. The numbers continue trending in the right direction as we went from one of the highest infections rates to one of the lowest in the country, so we will also allow slightly larger social and religious gatherings, but people need to continue wearing masks, socially distancing and washing their hands frequently to stay safe.”

The governor also updated New Yorkers on the state’s progress during the ongoing COVID-19 pandemic. The number of new cases, percentage of tests that were positive and many other helpful data points are always available at forward.ny.gov.

Today’s data is summarized briefly below:

Of the 51,144 tests conducted in New York State yesterday, 581 or 1.1 percent, were positive. Each region’s percentage of positive tests over the last three days is as follows:

The Governor also confirmed 581 additional cases of novel coronavirus, bringing the statewide total to 389,666 confirmed cases in New York State. Of the 389,666 total individuals who tested positive for the virus, the geographic breakdown is as follows: