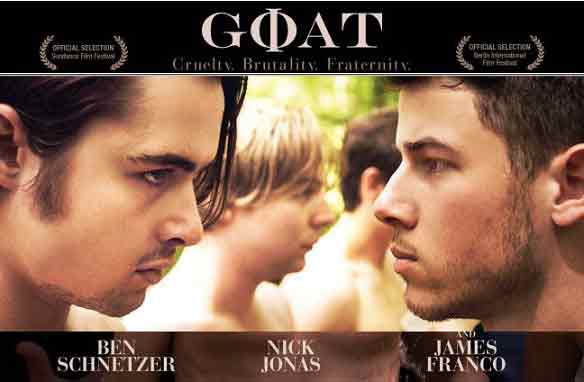 You’d be forgiven for thinking this to be a film solely about sorority hazing; although I’m willing to bet many might think that after watching GOAT. Unlike many films the subtext to be found within isn’t spelt out. One might need to read into the dynamics between the characters of the film to get a grasp of the underlying message(s).

I rarely ever reveal the exact storyline of a reviewed work but in this case I feel it may be necessary.

So be forewarned, there are spoilers ahead.

Brett and Brad are brothers. Brett (Nick Jonas) is already in college and the other, Brad (Ben Schnetzer), is himself, a short time away from attending Brett’s university. The film’s opening scene finds both brothers partying at, what one could only assume to be, Brett’s sorority house. Brad decides to leave earlier than expected, and upon arriving at his car is approached by an unknown young man pretending to have been at the party himself. He asks Brad for a short ride home; a plea which Brad hesitantly gives in to. Turns out this stranger had a friend hidden in the dark who joins in the ride. The longer than expected drive ends in both men pummeling Brad in one of the most viciously inflicted beatings, quite possibly, I’ve ever seen depicted on the screen.

It’s with a smidgeon of disbelief that Brad’s recounting of the confrontation is met with by authorities. A year will pass before the crime is ever revisited, but it’s what takes place during that time which is at the crux of the story. Following this crime, Brad is at first uncertain about following through with his entry into college on time, but after a visit with his brother and his sorority Brad finds himself now looking forward to entering college after all. The ensuing storyline, in a nutshell, entails Brad’s pledging into Brett’s sorority and his suffering through hell-week. All of which is followed by an incident, after having already been pinned, involving Brad’s fellow pledge and roommate. One of dire consequence to all involved. All culminating in an investigation by school officials; individually interviewing the sorority members, and subsequently suspending the sorority after someone apparently snitches.

Mind you, half way through the story we come to see how Brett becomes more and more disenchanted with the purpose and importance of the fraternity which he belongs to. It’s following the suspension that sorority elders mistake Brad as being the snitch when in fact it turns out to be Brett.

Therein lies the story. The following would be my interpretation.

Firstly, there’s Brad’s entrance into fraternity life. It’s merely hinted that Brad’s pledging with the sorority was about the protection and social status that went along with such a deed; aside from say, the fact his own brother was a member. Yet one can probably, and perhaps effortlessly, decipher his reasoning, as having to do, whether subconsciously or not, with the beating he’d received early on. There are moments when we find him concerned about others’ views of him; and whatever shortcomings might be perceived in him; whether he’s “man enough” or not. Of related significance is one painful scene wherein he reproaches his brother for not having shown up at his own pinning. Brett responds by telling him how he didn’t belong there and how this sorority wasn’t meant for him. It’s only later, upon discovering Brett as being the snitch, that we come to understand the sincere meaning behind his words. I’m willing to go out on a limb and say that, perhaps Brett’s disillusionment with the fraternity was borne not just from seeing his own flesh and blood’s harsh experience through hell-week, but as well through the parallels he might’ve drawn between that and the beating Brad had experienced early on.

Following my train of thought, we’d have both brothers making similar connections but for different reasons and outcomes. Brett most likely saw clearly the ugliness of what’d been going on and so great was his love for his brother that he did not want that for him; nor did he want it for himself. Interestingly, these two aren’t the only ones to associate the earlier beating with the hazing. I myself as will hopefully more individuals viewing the film arrive at the same associative conclusions. It’s to do with the underlying messages I hinted at early on: Herd Mentality/ Pack Mentality / Group Think / Group Polarization, and so on. One might struggle, as had I, with trying to pinpoint the exact psychological phenomenon that applied best. It’d seem that almost every kind would apply to one extent or another. So from here on I’ll just make references to ‘psych’ for lack of a more precise reference.

I’d like to think that the film maker(s) had also gone about their portrayal of the story with this sort of ‘psych’ in mind.  There’s a scene at the beginning of the hazing ritual with the pledges lined up being asked numerous questions, one of which would be, ‘who was the first president of the United States’. Answering the questions correctly only resulted in punishment. Interestingly enough one online reference‘s attempt to define ‘Pack Mentality’ includes mention of an experiment asking the very same question. In that one situation, to be noted, would be how many of the respondents followed suit in mimicking the first wrong answer to be rewarded; which instead of George Washington, would be George Bush. Unfortunately for these pledges in GOAT, the idea never caught on. This would be the precursor for all that would follow: Herd mentality in the way these individuals submit themselves to degradation and torture. Pack mentality/ Mob mentality in the way this sorority behaved and represented themselves with a ‘one for all, and all for one’ thought process; plus of course, the two men who’d beaten Brad to a near-pulp. There within that sort of connection would be found that which I’ve mentioned: Brett’s supposed revelation of the resemblance his own college group had to the two men who’d accosted Brad. After all, there exists, in my mind, a very thin line between the two.

Of course let us not forget about the social and physical repercussions feared by those unwilling to come forth in reporting such goings-on in the first place; or for that matter, snitching on the ritualistic events which’ve resulted in deaths or great injury. One need only do a simple search to learn of the many hazings gone wrong in our country. Relatedly speaking would be Hazingprevention.org ‘s College Education Program in Conjunction with the Release of this Feature Film, GOAT. A program which hopes to further empower people towards the prevention of hazing.

I’d like to send out a high five to all the actors involved. Performances were strong all around as was the script and direction. Although I’d have preferred Brett’s emotional struggles to have been displayed a bit more consistently throughout the film. Nonetheless, this is an important film methinks. One which helps drive home the message about the wrongs of such rituals.

Will Pullen :: The Smile