First U.S. Exhibition In Half A Century For
Germain Richier
To Go On View In New York City 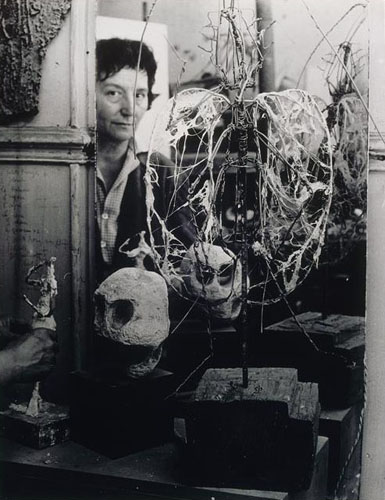 On view in the landmark building at 909 Madison Avenue where both galleries reside, Germaine Richier will present more than forty important sculptures ranging from early torsos and figures, to startling hybrids of humans crossed with bats, toads, spiders, and vegetal organism, that brought the artist international recognition before her untimely death at the age of 57.  The exhibition traces the evolution of a defiantly independent vision and the artistic trajectory of a woman whose life was imprinted indelibly by two World Wars; who began her career in the studio of Antoine Bourdelle; and who went on to break convention and leave a vivid mark on the history of Modern art. The exhibition complements Richier’s sculptures with a selection of photographs by her contemporary Brassaï, who documented the artist’s studio and captured the uncategorizable power of her work.

Germaine Richier will remain on view through April 12th on Manhattan’s Upper East Side, in the same neighborhood where the artist’s first American solo exhibition was presented to broad critical acclaim in 1957 at the legendary Martha Jackson Gallery. The exhibition coincides with a major retrospective of Richier’s work currently on view at the Kunstmuseum Bern in Switzerland, as well as Giacometti, Marini, Richier: The Tortured Figure at Musée Cantonal des Beaux-Arts of Lausanne in Switzerland.

Germaine Richier has been organized with the support of the artist’s family. The exhibition is accompanied by a fully illustrated catalogue, one of the first scholarly studies of the artist’s work ever published in the United States. Researched and edited by Jennifer Buonocore and Clara Touboul, with support from Daphné Valroff, the book will feature original essays by Sarah Wilson and Anna Swinbourne. It also will reproduce a 1953 text by André Pieyre de Mandiargues never before translated in English, as well as important archival documents from the Germaine Richier Estate.

In addition to works coming from the Germaine Richier Estate, loans from American and European private collections will contribute to an in-depth examination of Richier’s oeuvre, which defies easy classification. Germaine Richier will explore the daring ways in which Richier’s art bridges the tradition of classical figurative sculpture with an idiosyncratic visual language born of an anguished, searching, and, ultimately, spiritual post-World War psyche.

Germaine Richier will reintroduce American audiences to one of the first female sculptors ever to receive critical acclaim within her lifetime — an artist who exhibited at five consecutive Venice Biennales beginning in 1948, was featured at the first São Paulo Biennale in 1951, and was avidly collected in Europe and the United States.

Born in 1902 in Grans, France, Germaine Richier moved to Paris in 1926 and became a student in the studio of Bourdelle, with whom she worked until his death in 1929. Like Antoine Bourdelle, Auguste Rodin, and Alberto Giacometti (who also studied in Bourdelle’s studio), Richier explored the tradition of bronze figurative sculpture but charted a new territory beyond that tradition. Inspired by the creatures she encountered in the stories of the Provence region where the artist grew up, and deeply influenced by her first visit to the ruins of Pompeii in 1935, Richier’s work mixes qualities of both the classical and the mythical. She was enraptured by the natural world. The idea of reverse evolution – the degenerating of the human through mammal to bat, to bird, to insect – was a powerful metaphor not only for nature but for the regression of civilization in the aftermath of the atrocities of the war years.

In Germaine Richier, the artist’s career is traced by major works of each period. Among early sculptures on view are the highly classical standing figures of Loretto (1934) and Nu ou La Grosse (1939), darkly patinated bronzes that express the prerogatives of classicism — balance and harmony – and reflect the influence of Richier’s mentors. As the exhibition moves into the 1940s, visitors will find Richier coming more fully into her own, expressing two imperatives that will shape her work until her death — the challenge of imbuing static materials with movement, and the wildness of nature experienced in her Provencal childhood. Modest in scale but astonishingly alive, La Mante, moyenne (1946) is neither mantis nor man, crouched and gesturing. The figure called La Forêt (1946) illustrates perfectly Richier’s link to her roots: In a letter to her mother that year, Richier asked her family to send to Paris a bundle of specific branches for her to use instead of wires in the process of making this sculpture.

In the 1950s, the artist’s figures underwent a remarkable transformation as she experimented with hybrids and untried geometries, even while remaining connected to her own training. La Tauromachie (1953) depicts a figure familiar to the bull rings of the Camargue region in the South of France. In this sculpture Richier skillfully shifts the horseman’s staff to one side, throwing off symmetry and imbuing the tableaux with special vitality. During the first half of the 50s, Richier created many sculptures depicting seated women; on view in the exhibition, L’Eau (1953 -54) is the last of a series in which female forms are completely human. The type of Ur-Woman depicted in this sculpture subsequently gives way to the artist’s signature human-insect hybrids, astonishing figures in which Richier’s dual interests in nature and classicism, instinct and technique would merge powerfully. La Sauterelle, grande (1955-1956) is a prime example from this period.

The latest work on view in Germaine Richier is the large five-sculpture grouping l’Echiquier, grand (1959), which marks the apogee of the artist’s career. Coursing through the exhibition is vivid evidence of Richier’s rich variety of patinas, which range from dark tones to gold finishes, rendering animated effects. Her unconventional use of color – perhaps one of the most extraordinary and unexpected aspects of Germaine Richier’s work – is exemplified in the late painted bronze Le Couple peint (1959).

Germaine Richier will be on view to the public at 909 Madison Avenue at East 73rd Street, from Tuesday through Friday from 10 AM until 6 PM, Saturday 10 AM until 5 PM, and by appointment.