Front Cover – A Film by Ray Yeung – A Review 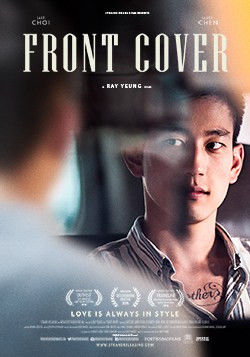 Synopsis: FRONT COVER is about handsome, openly gay New York City fashion stylist Ryan (Jake Choi), who rejects his traditional Asian upbringing. Ryan is given an assignment to style Ning (James Chen), a famous Chinese actor, for an important photo shoot. After a rocky start, an unlikely friendship develops between them, leading Ryan to examine his identity and consider an enticing new path for his life and career. A tender, funny look at clashing cultures and love, FRONT COVER is a delight for the urban fashionista in us all.

A bond will be made; lies will unravel; truths told and sacrifices made.

Written and directed by Ray Yeung is this stunningly and surprisingly beautiful, and charming romantic comedy. I say ‘surprisingly’ considering how blindsided I was by its overall quality. The script, acting, direction and music as a whole surpasses that of so many others that’ve played on the big screen in past years. Many hours later after having seen it my mind has yet to shake it free. If it doesn’t make you laugh then it’ll touch your heart; and it may very well move the romantic in you to tears. It’s touched my own heart in ways that no other film has done in quite some time.

The story revolves around openly gay fashion stylist Ryan Fu and the China Actor, closeted and conflicted, Qi Xiao Ning whom he’s forced to style for a photo shoot. Jake Choi and James Chen do phenomenal jobs respectively of portraying these characters. The film title itself is a reference to the front cover feature of Mais Oui, the magazine which Ryan works at; an achievement highly sought after by him.

Ryan and Ning, despite both being Chinese, are at opposite ends of the cultural spectrum in more ways than one. From differences in language, food and ethnic customs to behavioral and sexual acceptances and values; cultures clash aplenty. Something which serves as an effective comedic plot device continuously throughout the film. Regardless, the chemistry between both actors and characters is a wonder to behold.

The story, told with delightful grace, will be appreciated by many a moviegoer I believe. You know a film is truly well done when you find yourself scurrying about afterwards in search of the background on all those involved; from the actors and writer/director to the soundtrack itself. It’s one which I hope gets some recognition come awards time. I can’t help but think that it’s the sort Hollywood loves.

Speaking of music, filmmakers and awards, Front Cover is the kind that Ang Lee could only wish he’d made. I mention him considering how many times he’s been recognized in the past and how this movie feels so much up his alley. Upon seeing it, knowing nothing about the director and writer, you’d swear he had some hand in it somehow. Musically speaking, the score plus the main song, ‘Standing in the Shadow of the Sun’ is written and performed by Paul Turner. It’s a lovely piece which I’ve listened to repeatedly. Albeit clocking in at a mere 2″ 04′, I couldn’t help look into past ‘Best Song’ Oscar Winners. Sure enough there’ve been winning songs that are just as short if not shorter. Even if there’s no awards recognition, Ray Yeung, Jake Choi, James Chen and Paul Turner are artists to be kept an eye on.

To sum it up, there’s a scene at the beginning of the film wherein Ryan and his coworker/friend Janet have just finished viewing a film, Springtime in Nanking starring Ning. Janet turns to Ryan and says: “The story is very powerful. This thing might actually turn out be huge.” Ryan responds: “Let’s be realistic. How big can a Chinese movie get.” To which Janet responds: “Crouching Tiger, Joy Luck Club…”. That just about says it all right there. This film, I predict, will be a sleeper hit. One which may in fact turn out to be huge. I highly recommend it sans pause.