Taking place over the course of an evening and a day is this tale of Harper and Allie, allies in the battle against adulthood and the responsibilities thereof; or rather, young, terribly shallow, Xanax popping women living in a universe of seemingly constant comical awkwardness. Mind you, when I say ‘Xanax popping’ I mean no disrespect towards anyone with legitimate needs for the drug not that either one of these two aren’t in need of some serious psychotropic medication. They’re as lost in their own lives as they are in the world of New York City, and that, in a nutshell is the story of Fort Tilden.

I went into this film not expecting very much and actually thinking I might be disappointed considering the many so-called comedies that’ve only let me down over the years. Well, I’m happy to have been proven wrong. What we’ve got here is the epitome of cattiness incarnate translated in such a way that it’s funny, funny, funny! Although I’m confident this sort of satire won’t be everyone’s cup of tea.

At the start of this film I wondered if this pair would turn out to be as annoying as the inhabitants of their ridiculous world. Quickly enough the question was answered with a resounding YES! These two are so wrapped up in themselves that they fail to see why they aren’t able to properly assimilate into the ‘Real World’ around them. I use quotes there since that so called real world is still a slight bit off from the one most of us might be accustomed to. Regardless, I found it irresistibly difficult to turn away from the car wrecks that are these girls’ lives. A duo so obnoxiously self-involved that you’ll wish there were some way to reach into the screen and slap them silly…but then you’d have to figure out which of the two to deal the hardest backhand. My money’s on Harper!

During the first two thirds of this film we’re treated to all the fun but it’s at that one hour mark that things take a dreaded turn into the world of drama. This is about the time they’ve finally arrived at Fort Tilden after a day of unfortunate adventure and it’s at this point that they’re forced to face themselves, so to speak. Not to say that it was a life changing experience for them but rather a momentary lapse of ethical sanity…’for lack of a better term? 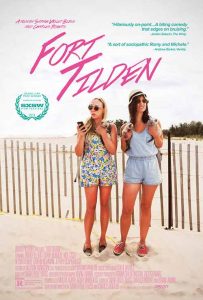 In the end, I’d have to call this one brilliantly winning comedy filled with some genuinely killer lines. It’s the sort of film I can imagine myself seeing numerous times for the sake of absorbing the dialogue which is anything but monotonous or boring. There are some truly funny scenes to be found within. Some of which have me giggling this very moment as I recall them.

Amidst quarter-life crises, Allie struggles to prepare for the Peace Corps, while Harper awaits checks from her father to fund her artistic dreams. But the two friends quickly shun responsibilities for the day when a pair of good-looking guys invite them along for a carefree Fort Tilden afternoon. As the two young women board their bikes and embark on a lengthy journey to the beach, they quickly realize that, akin to their confusing, transitioning lives, they neither know where they’re going nor how they plan to get there.

The debut feature film of directors Sarah-Violet Bliss and Charles Rogers, “Fort Tilden” is a hilariously insightful look at the consequences of extended adolescence.