Still Standing: The Enduring Legacy of the 1939 and 1964 World’s Fairs at the Arsenal Gallery

This event is free, but seating is limited. To RSVP, please email [email protected] 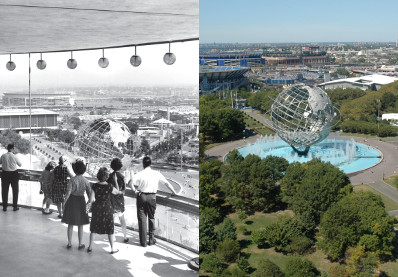 Flushing Meadows Corona Park is home to a significant collection of landscapes, monuments and structures that remain from the New York World’s Fairs. A survey of these surviving fair elements will be featured in this slide show presentation and talk with particular emphasis on their history, construction and current significance. Flushing Meadows Corona Park has a rich history known to many initially through the vivid descriptions of ash fields in F. Scott Fitzgerald’s The Great Gatsby and later through the innovative and now-iconic New York World’s Fairs of 1939-40 and 1964-65. Many features remain from the historic fair eras, some secluded and others on full display. This presentation will focus not only on the record-breaking installations anchoring the park’s historic core—Unisphere, Fountain of the Fairs, NYS Pavilion, Port Authority Heliport—but also on the lesser-known but equally important aspects of the park’s design elements, its si gnificant sculpture collection, landscape features and iconic park furniture. Mr. Krawchuk’s photographs will highlight details of Flushing Meadows Corona Park that are rarely seen by the public.

John Krawchuk is Director of Historic Preservation for NYC Parks and administers preservation projects on parkland throughout the five boroughs. He is intimately familiar with Flushing Meadows Corona Park, having spent the last 17 years at the Capital Division’s main headquarters in the park, the Olmsted Center, operating out of the original World’s Fair Corporation building from the 1964-65 Fair. Mr. Krawchuk is directly involved with efforts to restore Flushing Meadows Corona Park’s historic landscapes, monuments and structures within the context of current needs for this major urban regional park. He appears in the Emmy-nominated documentary Blueprint: NYC Parks as a featured speaker on Flushing Meadows Corona Park.

In conjunction with the exhibition Tomorrow’s World: The New York World’s Fairs and Flushing Meadows Corona Park in the Arsenal Gallery through August 27, 2014. Public Hours: Monday – Friday, 9:00 am – 5:00 pm.