Each Film to be Introduced by a Special Guest

Free To All – Free Outdoor Screenings Presented by Coca-Cola

The Intrepid Summer Movie Series, presented by Coca-Cola, returns this summer with a selection of six feature films. This year, for the first time ever, each film will be introduced by a special guest, including Top Gun flight double and former astronaut Scott D. Altman, astrophysicist Dr. Steve B. Howell, and author Jeffrey Kluger. Members of the public are invited to bring lawn chairs, picnic baskets and blankets to the Intrepid Museum to view the movies outdoors, free of charge, on a huge inflatable screen on the Flight Deck of the former aircraft carrier.

Doors open at 7:30pm and the program will begin at sunset. Seating will be on a first-come, first-served basis and space is limited. Visitors are encouraged to bring food and beverages to the screening, however alcohol is not permitted. All exits are final; there is no reentry allowed.

Prior to the doors opening, Guided Tours of the submarine Growler will be available at 6:00pm and 6:15pm. Tours require a non-refundable ticket and take place rain or shine.

The lineup for the 2015 Intrepid Summer Movie Series is:

Intrepid Museum members will receive priority access to the screenings. The Intrepid Museum strives to make all public programs accessible for people with disabilities and these films are all captioned for the hearing impaired.

For more information about the Museum or for up-to-date information on weather conditions, visit www.intrepidmuseum.org. 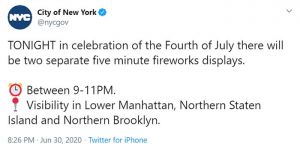