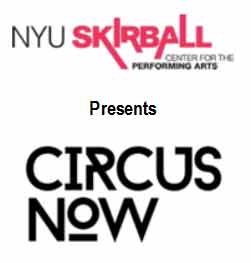 “Be astounded at the innovation of the modern circus at Circus Now!  Three nights of over 50 artists pushing the boundaries of the art,” New York Magazine, 2015 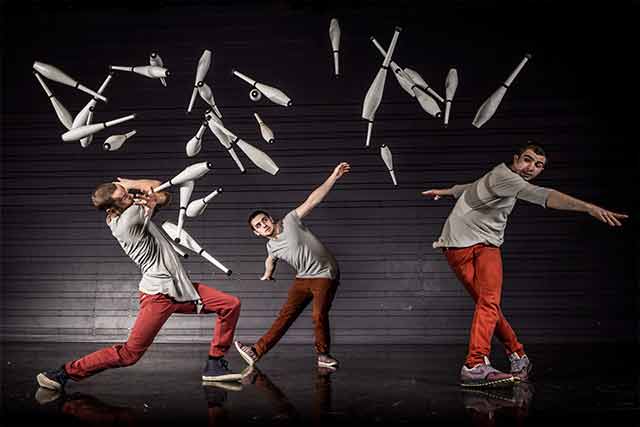 The Language of Chance

Founded in 2012, Acrobatic Conundrum, based in Seattle, is dedicated to creating performance experiences that engage and amaze audiences. Conundrum shows feature moments of absurd and intimate humanity, and are dedicated to a vision of human courage, connection, and collaboration. The company has performed in various venues around the Pacific Northwest, headlined the Chicago Contemporary Circus Festival, was a featured performer at the Vancouver CircusFest, and hosted the THREE HIGH Circus Series in Seattle.www.Acrobaticconundrum.com

A winner at the prestigious Jeunes Talents Cirque/Circus Next Awards in 2013, Oktobre features three of France’s top young circus-theatre talents, combining their trapeze, acrobatic and magic talents in a surreal circus-theater drama.  It can be seen as a circus show with outrageous characters in a world of dark fantasy, where the notions of time and logic are absent or as a sharp look at human behavior.  website:  http://alturl.com/wdpt2

Barely Methodical Troupe, founded in London in 2013, features three graduates from the U.K.’s National Centre for Circus Arts, all winners of the inaugural Circus Maximux competition. The acrobats fuse Hand-to-Hand and Cyr Wheel with a through line of creative dynamic movement.  Bromance celebrates all things “blokey” through a series of heroic, risk-taking physical feats. With an inventive mix of flawlessly-timed acrobatics, shoulder-high balances and a jaw-dropping routine inside a spinning metal wheel, the trio explores male companionship and its limits. www.barelymethodical.com

Nadère Arts Vivants, founded by Montreal-born contortionist Andréane Leclerc in 2013, is a non-profit organization whose mission is to create, produce and broadcast experimental hybrid works, combining circus language with a dramaturgic line. Whore of Babylon is Leclerc’s reinterpretation of the biblical Book of Revelation, featuring five circus-trained performers, one burlesque-freakshow artist and one actress, as well as original music by Martyn Jacques and the Tiger Lilies. A co-production with Montreal’s La Chapelle Theater, Copenhagen’s Republique theater and Montreal’s Studio 303. http://alturl.com/sso5w  and  http://nadereartsvivants.com/

Developed by five graduates of the New England Center for Circus Arts, Tinder & Ash is a new, full-length circus-theater show about the little and big deaths we experience in our lives, about losing and finding ourselves and each other, and, through it all, transformation. www.tinderandash.com

Water on Mars features three young jugglers who studied at Stockholm’s Dance and Circus University. Their tricks are as physical as break dance and as stylized as Japanese pop art. The trio brings a performance full of dynamic airborne images: 100 rings are thrown, backflips are landed, feet are twisted, water is flipped, 21 balls are juggled and 15 clubs spin around the 3 bodies while an electro beat keep the rhythm. http://www.wateronmarsjuggling.com

Dinner of our Discontent  (U.S. Premiere)

Aloft Circus Arts, based in Chicago, is a collection of earth-bound aerial and circus artists, expressing themselves without regard to gravity. Aloft reveals more than just the splendor and danger inherent in the circus arts; they construct accessible, purposeful stories, drawn from the juxtaposition of artistic, emotional and physical extremes. The results are acts and full-length productions that are powerful, dangerous, hilarious and passionate; where spectacle lies not in special effects or elaborate sets, but in the intensity, beauty and captivating nature of the human body entwined in circa.  http://www.aloftcircusarts.com

Sxip Shirey (emcee) is a New York-based composer, circus performer and storyteller. He tours internationally as composer and music director of the circus and physical arts show LIMBO and has toured with the Bindlestiff Family Cirkus and the Daredevil Opera Company, and has composed music for Crash Test Dummies produced by Anti-Gravity at the New Victory Theater.  Shirey performed with his JaNk! Band, accompanying circus, dancers and variety acts for Madonna at her 57th birthday party. www.sxipshirey.com

Circus Now is a volunteer-powered, non-profit organization that encourages and promotes circus as an art and a practice in North America. Circus Now supports adult circus artists, enthusiasts, and thinkers in their efforts to create, practice, and evolve circus by hosting events for people to meet, see work, and make circus together. Circus companies survive, thrive, and connect with theaters and presenters from around the world greatly in part to Circus Now’s advocacy campaigns.

NYU Skirball Center for the Performing Arts is the premier venue for the presentation of cultural and performing arts events for New York University and lower Manhattan. The NYU Skirball mission is to showcase and support diverse and eclectic talent from around the world, while cultivating audiences for live performance through deeper engagement opportunities. For more information visit: www.nyuskirball.org.