Join the Intrepid Sea, Air & Space Museum for an intimate evening with NASA Astronaut (retired) and Intrepid Senior Advisor for Space Programs Mike Massimino; and TIME Magazine Editor at Large and co-author of Apollo 13, Jeffrey Kluger, as they discuss Massimino’s new memoir, SPACEMAN: An Astronaut’s Unlikely Journey to Unlock the Secrets of the Universe onWednesday, October 5. Complimentary glass of wine for attendees 21 and over from 6pm to 7pm followed by a conversation and book signing from 7pm – 9pm at the Intrepid Museum located at Pier 86 (46th Street and 12th Avenue).

Massimino was selected as an astronaut candidate by NASA in May 1996, and qualified for flight assignment as a mission specialist following two years of training. He is a veteran of two space flights, STS-109 in March 2002 and STS-125 in May 2009, both of which were Hubble Space Telescope servicing missions.  Massimino has logged a total of 571 hours and 47 minutes in space, and a cumulative total of 30 hours and 4 minutes of spacewalking in four spacewalks.

In SPACEMAN: An Astronaut’s Unlikely Journey to Unlock the Secrets of the Universe, Massimino explores his childhood space dreams, which were born the day Neil Armstrong set foot on the moon.  His journey to realize those dreams is what makes his story so remarkable.  Each hurdle could easily have been the end, but as he realized – no one is really alone, and having the “right stuff” isn’t always what you expect.  Books will be available for purchase and signing. Intrepid Museum members receive a discount on SPACEMAN and may RSVP for guaranteed seats. General public admission is first come, first served.

The event is free and a complimentary glass of wine will be available for guests ages 21 and older. 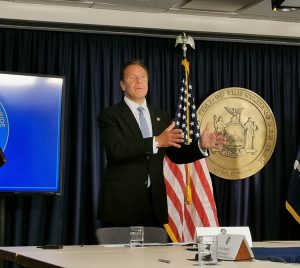