Followed by the Dance Festival at Tompkins Square Park, the destination of the parade at Avenue A and Saint Marks Place

Further down on this page you’ll find a parade route map.

New Yorkled’s been at this parade numerous times over the years and if you still haven’t taken part in witnessing all the fun then you’re making a big time mistake. It’s exhilarating, entertaining, a great thrill to see all the many dancers parading down the street carrying out their dance styles with some wicked costumes to match. Should you show up then be sure to bring along a camera!

Also, check out some of the many photos taken by us in past years at this page here… 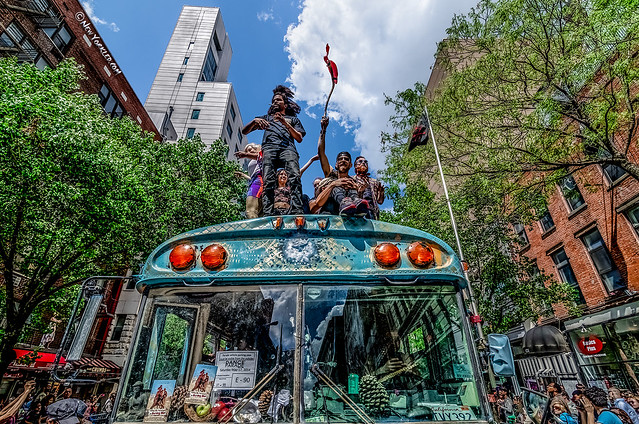 Here’s a video as featured by the organizers of the 2019 Dance Parade NY:

The parade commences at Broadway and 21st Street, travels south through Union Square and University Place, and turns East onto 8th Street. As it passes through Astor Plaza, Emcees Jerry Goldman and Rhina Valentine announce each group with choreography at our Grandstand at 4th Avenue. We call this “40 Second” street because each group has 40 seconds to strut their stuff. The parade continues on Saint Marks Place and finishes at Avenue A.

As the parade filters into the park, it transforms the space into a world of spirited dance displays and interactive activities. At DanceFest hours of on-stage performances, dance lessons, workshops, kids’ activities and dance parties await those attending this post-parade festival.

It’s named that way because groups with choreography have 40 seconds to perform. The grandstand is located in Astor Place Plaza, where Fourth Avenue meets St. Mark’s Place. Seating more than 300 spectators, the stands are the best seat on the parade route as 10,000 dancers stop and perform. Tickets are available for purchase and all proceeds go to offsetting the cost of the parade.