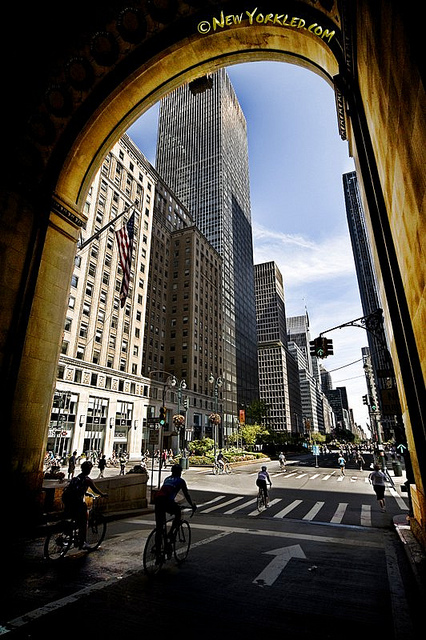 Photo taken as we exit one of the tunnels underneath the Helmsley Hotel which is situated beside the Met Life Building and Grand Central. Photo was taken on NYC Streets Day when traffic is halted along Park Avenue and other streets.

Seven Miles of NYC Streets opened to the public for playing, running, walking or biking.

New Yorkled’s had the pleasure of attending the very first of these annual affairs as well as the subsequent ones for a couple years. Funny how it’s grown so very much. In the beginning there weren’t anywhere near as many folks participating in the event. Gotta let you know that if you’re a die-hard photographer like yours truly then you’ll truly get a kick out of walking up or down the avenues sans traffic getting in the way! It’s a great experience for all and a chance for the photographer in your to get a hold of spots rarely ever captured from angles hardly ever seen; that is, from the perspective of a pedestrian.

Held between 7:00 am to 1:00 pm, Summer Streets extends from the Brooklyn Bridge to Central Park, along Park Avenue and connecting streets, with easy access from all points in New York City, allowing participants to plan a trip as long or short as they wish. All activities at Summer Streets are free of charge, and designed for people of all ages and ability levels to share the streets respectfully.