Cathedral of ST. John the Divine HOSTS A Celebration of Blessed Absalom Jones

A Celebration of Blessed Absalom Jones 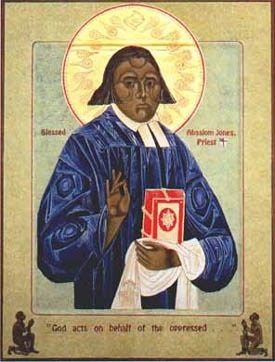 The Bishop of New York, the Cathedral community and the Episcopal Diocese of New York will join together for a Eucharist honoring the life and work of Blessed Absalom Jones, featuring a sermon by The Reverend Kelly Brown Douglas, Professor of Religion at Goucher College, on Saturday, February 7th, 2015 at 10:30 a.m. at The Cathedral of St. John the Divine, 1047 Amsterdam Avenue (at 112th Street).

Kelly Brown Douglas is a leader in the area of womanist theology as well as Professor and Director of the Religion Program at Goucher College, where she held the Elizabeth Conolly Todd Distinguished Professorship from 2006 to 2012.  Douglas is considered one of the country’s most distinguished religious thinkers and educators.

This service is open and welcoming to all, in commemoration of Jones’s perseverance against exclusion, intolerance and oppression.