“A Spectacular Night With The Stars: The Golden Age Of Hollywood In Retrograde At The Dawn Of The Empire Of Television” (Play) By Brain Melt Consortium

It’s 1960 and the empire of cinema has fallen and a new medium is rising to take its place: television. Judy, a movie star as talented as she is troubled, invites America into her home for a televised variety show filled with her most famous friends. But things are not what they seem in this fabulous affair: Satanism, serial killers, madness and mayhem lurk around every corner. It all culminates in a terrifying occult ritual that may or may not end the entertainment industry as we know it. The play uses the imagery of classic Hollywood as a lens through which to explore our anxieties regarding technology and its impact on contemporary popular culture. Cast of eight, directed by Rachel Kerry. 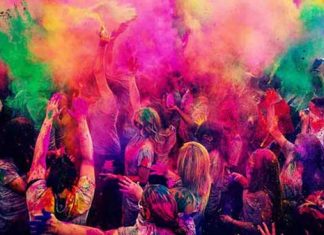 “Holi in the City”: NYC’s Biggest Festival of Colors Party 2020