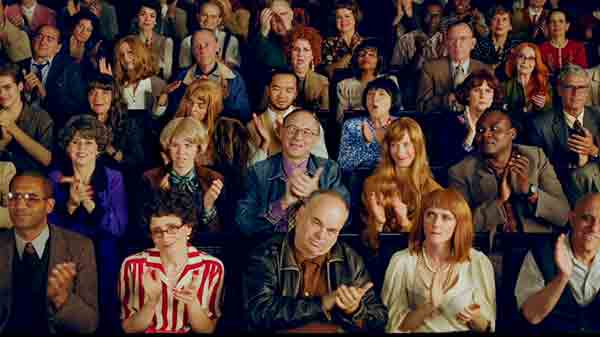 (New York, N.Y.) May 25, 2017 – In partnership with Lehmann Maupin & The Broadway League, Times Square Arts presents artist Alex Prager’s Applause on Times Square’s electronic billboards from 11:57 p.m. to midnight every night in June. This project is a part of Midnight Moment, a monthly presentation by The Times Square Advertising Coalition (TSAC) and Times Square Arts.

In the heart of the Theater District, Applause turns viewing expectations upside-down, exposing the underlying tension between a performer and audience. Prager inserts viewers into the role of the performer, looking out at a costumed audience applauding on an eerily endless loop. Surrounded by larger-than-life cheers across the screens of Times Square, viewers’ everyday lives become the show, inviting them to consider elements of performance not just within the boundaries of a stage, but within quotidian activities like tourism and people-watching. The cheering actors, filmed within the Opéra Bastille, stare directly at onlookers directly in loops just short enough to feel unnatural, continuing Prager’s psychological examination of the complex dynamics that exist between the individual and the crowd and the emotional effect of two opposing viewpoints: the watcher and the watched.

Alex Prager, Artist, said “I’m thrilled to be participating in Times Square Arts Midnight Moment. My recent work has been about capturing crowds and audiences, and this platform offers an opportunity to insert my work within what could be described as New York’s largest crowd.”

Charlotte St. Martin, President of The Broadway League, said “The Broadway League is excited to partner with Times Square Arts to present Applause, June’s Midnight Moment. June is awards season with the Tonys celebrating Broadway and The Jimmys® celebrating high school musical theatre. Over 12 million people come through Times Square every year to attend a Broadway show and express their appreciation to the performers. This piece turns the tables on theatre-goers and gives them a peek at what it’s like to be on stage and see people applauding them.”

David Maupin, Founder of Lehmann Maupin, said, “Alex Prager’s Applause delves further into the dynamics between artist and viewer, using a vantage point that transforms the viewer into the performer looking out onto the audience, making us aware of our own anxieties and role as performer in our everyday lives. We are delighted that this work will be accessible to the public on a monumental scale through the fantastic programming of Times Square Arts ‘Midnight Moment’.”

Tim Tompkins, President of the Times Square Alliance, said, “During this month when, because of the Tony Awards, we celebrate live theater and audiences, it is especially relevant to have this creative digital interpretation of watching and being watched in the heart of the live theater district.”

Debra Simon, Times Square Arts Director, said, “At once validating and unnerving, Alex Prager’s work questions our expectations of performance, making us wonder who is watching whom. The longer you watch the characters on screen watch you, the more you start to think about what might be going on in their heads as well.”

Fred Rosenberg, President of the Times Square Advertising Coalition, said, “The iconic screens of Times Square are the perfect platform to convey the feeling of being watched and surrounded by a live audience. This unique and immersive video will surely bring a sense of surprise to local New Yorkers and Times Square’s visitors. When you look up at our giant screens, you don’t usually expect them to be looking back at you!”

The following digital screens are participating in the June Midnight Moment:

Alex Prager (b. 1979, Los Angeles; lives and works in Los Angeles) is a photographer and filmmaker. Prager’s elaborately staged scenes tap into a shared cultural memory drawing inspiration from a wide range of influences and references including Hollywood cinema, experimental films, popular culture and street photography. Her familiar yet strange images suggest a sense of timelessness while also creating a world that synthesizes fiction and reality.

Prager has received numerous awards, most notably the FOAM Paul Huf Award (2012). Her editorial work has been featured in prominent publications including Garage, Vogue, and W, and her film series Touch of Evil, commissioned by The New York Times Magazine, won a 2012 Emmy Award. http://www.alexprager.com/

The Broadway League (Charlotte St. Martin, President), founded in 1930, is the national trade association for the Broadway industry. The League’s 700-plus members include theatre owners and operators, producers, presenters, and general managers who present in nearly 200 markets in North America. Each year, League members bring Broadway to nearly 30 million people in New York and on tour across the U.S. and Canada. The Broadway League has recently added a new category for International membership to collaborate with professionals from around the world who produce and present Broadway quality theatre. The Broadway League annually co-presents the Antoinette Perry “Tony” Awards®, one of the most coveted awards in the entertainment industry.

Key League programs and resources include: Kids’ Night on Broadway®, The National High School Musical Theatre Awards™ (The Jimmys®), Stars in the Alley®, Internet Broadway Database® (ibdb.com), Broadway.org, SpotlightonBroadway.com, BwayZone.com, Commercial Theater Institute (with Theatre Development Fund), as well as numerous conferences and forums for our members. TheatreAccessNYC (co-produced with TDF) is the one-stop website of accessible Broadway performances for theatregoers with disabilities. Broadway.org is the League’s official on-line headquarters for Broadway in NYC, on tour, and internationally.

For more information visit BroadwayLeague.com, or follow @TheBwayLeague on Twitter and visit us at Facebook.com/BroadwayLeague. Download the free Broadway.org and IBDB mobile apps from the iTunes App Store or Google Play.

Broadway theatres are filled with an exciting array of new and classic musicals and plays, providing the perfect experience for every audience. Great seats are available at every price point and are easy to buy online, by phone, or in person at theatre box offices. It’s always the perfect time to see a show. Broadway performs every day of the week at multiple curtain times to accommodate every schedule.

Founded in 1996 by partners Rachel Lehmann and David Maupin, Lehmann Maupin has fostered the careers of a diverse group of internationally renowned artists, both emerging and established, working in multiple disciplines and across varied media. With three locations—two in New York and one in Hong Kong—the gallery represents artists from the United States, Europe, Asia, South America, Africa, and the Middle East. Known for championing artists who create groundbreaking and challenging forms of visual expression, Lehmann Maupin presents work highlighting personal investigations and individual narratives through conceptual approaches that often address such issues as gender, class, religion, history, politics, and globalism. 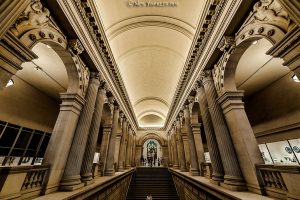