Presented By Capital One Returns 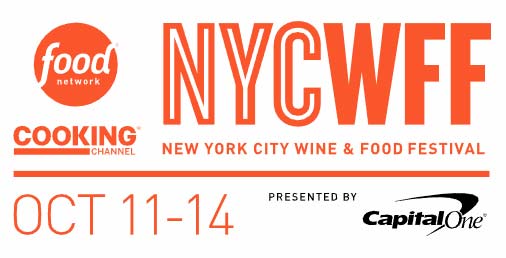 The line-up of events taking place on the Festival’s signature Pier 92 rooftop overlooking the Hudson River features of mix of fan-favorite classics and brand-new fêtes, including:

New parties like 90’s Flashback Friday hosted by Rev Run, Breakfast Pajama Party, Drag Brunch hosted by Countess Luann de Lesseps, On The Rocks: Cocktails and Cool Bites hosted by Ted Allen, All About Cake hosted by Christina Tosi of Milk Bar, Hair of the Dog Brunch hosted by Anne Burrell, and more are accented by several events that are back by popular demand, including:

SAVE THE DATE: New presenting sponsor and official credit card partner Capital One will give cardholders the opportunity to get exclusive access and ticket benefits during the Capital One Cardholder pre-sale June 18 – 24.  Tickets can be purchased online at nycwff.org or by calling (800) 764-8773.  General ticket sales begin on Monday, June 25.  Stay up to date by following the action on Facebook, Instagram and Twitter at @NYCWFF/#NYCWFF.

Between NYCWFF and its sister Festival, Food Network & Cooking Channel South Beach Wine & Food Festival (SOBEWFF®), which takes place each February in Miami, Florida, more than $39 million has been raised to benefit the respective charities for each Festival.  Beyond the funds raised, both Festivals draw attention to the vibrant dining culture in their respective cities, provide economic stimulus in their communities and serve as an invaluable platform to drive awareness, engaging and inspiring people to get involved in philanthropic activities.

The Food Network & Cooking Channel New York City Wine & Food Festival presented by Capital One is hosted by and benefits the No Kid Hungry® campaign and Food Bank For New York City, with 100% of the Festival’s net proceeds helping fight hunger.  The Festival has raised more than $11 million to date for these hunger-relief organizations.  Southern Glazer’s Wine & Spirits is the exclusive provider of wine and spirits at the Festival.  In September 2017, BizBash named the Festival the #3 Food & Restaurant Industry event in the United States for the fifth year in a row.  More information on the Festival can be found at nycwff.org.

About No Kid Hungry®

No child should go hungry in America, but 1 in 5 kids will face hunger this year.  Using proven, practical solutions, No Kid Hungry is ending childhood hunger today by ensuring that kids start the day with a nutritious breakfast and families learn the skills they need to shop and cook on a budget.  When we all work together, we can make sure kids get the healthy food they need.  No Kid Hungry is a campaign of national anti-hunger organization Share Our Strength.  Join us at NoKidHungry.org.

For 35 years, Food Bank For New York City has been the city’s major hunger-relief organization working to end hunger throughout the five boroughs.  Nearly one in five New Yorkers relies on Food Bank for food and other resources. Food Bank takes a strategic, multifaceted approach that provides meals and builds capacity in the neediest communities, while raising awareness and engagement among all New Yorkers.  Through its network of more than 1,000 charities and schools citywide, Food Bank provides food for nearly 63 million free meals for New Yorkers in need.  Food Bank For New York City’s income support services, including food stamps (also known as SNAP) and free tax assistance for the working poor, put more than $110 million each year into the pockets of New Yorkers, helping them to afford food and achieve greater dignity and independence.  In addition, Food Bank’s nutrition education programs and services empower more than 50,000 children, teens and adults to sustain a healthy diet on a low budget.  Working toward long-term solutions to food poverty, Food Bank develops policy and conducts research to inform community and government efforts.  To learn more about how you can help, please visit foodbanknyc.org.