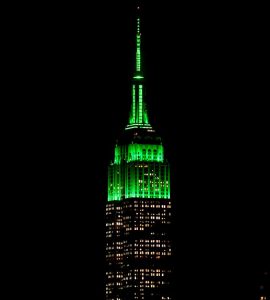 The Empire State Building will sparkle in green lights on Monday night, November 18, 2019, to celebrate the exhibition Making Marvels: Science and Splendor at the Courts of Europe at The Metropolitan Museum of Art.

Opening to the press today, to Museum Members tomorrow, and to the public on November 25, this landmark exhibition includes some 170 Renaissance and early Baroque treasures—many of them rarely seen by the public—brought together from important princely collections throughout Europe. Included are dazzling jewels and gem-encrusted clocks, automata, silver furniture, musical instruments, jewelry, paintings, sculptures, and print media.

Highlights include the “Dresden Green” (the largest flawless natural green diamond in the world, weighing 41 carats and in its original 18th-century setting), from the Grünes Gewölbe, and “The Draughtsman Writer” (a late 18th-century writing automaton that inspired the book The Invention of Hugo Cabret and its movie adaptation). #MakingMarvels #themet