A Film by Vincent Sabella 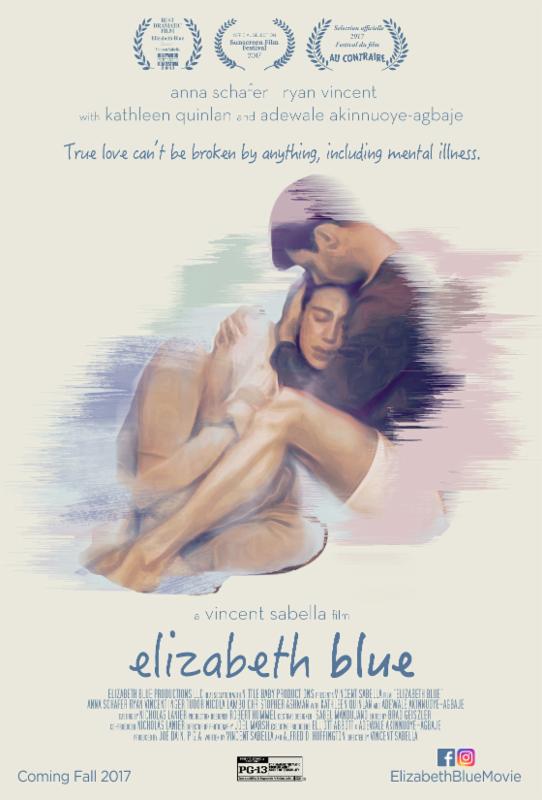 Elizabeth Blue is the story of Elizabeth as she struggles with her schizophrenia after being released from a mental institution. In the time that follows, she’s comforted by her fiancé Grant and deals with her disapproving mother; all whilst visiting with her new doctor.

Yet, everything is not as it appears. There is a twist to this tale. One which I saw coming halfway through its telling and indeed there are hints, one of which I hadn’t grasped until I found myself recounting the film to a friend.

I’d been asked not to reveal spoilers; an extraordinarily difficult task considering how every intertwining facet of this story revolves around a single character. One person out of a sum of four major ones. So I’ll do my best to steer you along.

In your own watching, pay extra attention to the interactions and the choice of words between Elizabeth and her fiancé, Grant. Take note also of what Dr. Bowman has to say to her as well as his reasoning therein. There’s an especially exquisite moment when he addresses her about the meaning of love roughly 45 minutes into the film. A scene I found myself returning to not merely because of its beauty but for the sake of exploring any other missed clues. Additionally, there’s the mother’s own exchange with the doctor near the end of the film. Something which may very well convey yet another part of the twist. Something you’ll need to keep in mind when considering her earlier meeting with Elizabeth; a moment that was excruciating and agonizing to watch.

I wish I could tread further in my telling of the story but, as mentioned, I had to keep from revealing too much. Quite possibly you will, as I had, find yourself coming up with your own ‘aha’ moments after having witnessed this fine work.

In all, Vincent Sabella, who directed and co-wrote Elizabeth Blue, did an admirable job of this drama which feels like it’d be just as perfect as a stage play. Keep in mind that Mr. Sabella is himself a victim of schizophrenia. I suppose his familiarity with the subject shows all too well through his painful depiction of what life is like with the illness.

Nicholas Lanier apparently did the casting and well, the selections of Anna Schafer as Elizabeth and Ryan Vincent as Grant were good ones. It’s not just about how well they may have played out their roles but their appearances as well. As an afterthought I realized how important it may have been to choose these specific actors for their looks and the, relatively speaking, demeanor they were able to convey. Once again, I can’t get carried away in my explanation without giving too much away, but it’s something you should keep in mind when examining the film after your first encounter.

As for the music? What can I say except that it was perfectly chosen. Truly heart touching and appropriate for the film’s subject matter. So much so that I’m looking forward to owning the soundtrack once it’s available.

Interestingly, the more time I spend thinking about this film the more I come to appreciate every bit of it. Hopefully you’ll have the same experience. I thank Vincent Sabella for sharing with us this great work of his which, as I understand it, is his first full length film. Congratulations!

More about Vincent Sabella at IMDB