As part of the 2015 Tribeca Film Festival’s 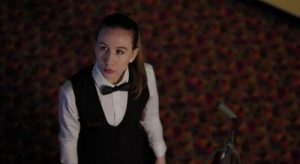 Synopsis: “A movie theater usher is working late at the multiplex. When she goes to investigate a mysterious sound, she has an unexpected encounter.”

When it comes to great cinematic experiences there’s nothing more right than a story silkily told from beginning to end in the smoothest fashion imaginable. Such is this seven minute short story featuring a score as unflawed as the pair of characters’ performance to be found within. As a matter of fact that very music builds slowly, drawing you in until the very moment that the visual rewards are gotten. The editing and cinematography were right on target as was the choreography; There I’ve gone and done it by giving it all away with the utterance of that last word. But fear not since you’d have to witness this little gem to truly get it. Thanks go out to the folks who’ve put this together for having place a big ‘ole smile on this fella’s mug.

Yoonha Park is an American filmmaker based in New York and has been directing music videos and short films since 2008. He has made videos for artists such as Liars, Washed Out, and M83.