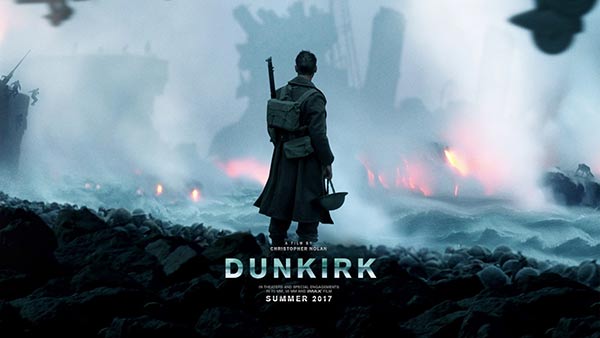 Within the first 15 minutes of viewing I’d gotten the feeling that I was witnessing what very well may be a masterpiece of epic proportions. All that was needed to solidify that sentiment was for the film to continue down the road it’d started upon; and that it did, but in spades. This work of art has an epic feel about it from beginning to end. One that doesn’t let up throughout.

Dunkirk is based upon the real life evacuation of 300,000 Allied soldiers from the shores of Dunkirk, France during the second World War after they’d found themselves surrounded and cut off by the invading German Army. A historical event that’s not well known to most Americans. We’ve Mr. Nolan to thank for bringing it to the screen.

The story is ably told from three points of view taking place in the air, on the land and from the sea. It’s an impressive feat considering how we’re repeatedly and quickly taken from one to the other through the story’s telling. It’s the sort of thing which under a less experienced filmmaker would be a tangled and jarring mess. Yet once again we’ve Mr. Nolan to thank for his creative competence. He not only wrote the film but directed and co-produced it as well. With a hit list of blockbusters underneath his belt it’s no wonder he managed to carry this out as well as he does.

Altogether, ‘Dunkirk’ is a thing of cinematic beauty. Some scenes were complete visual treats for which I’d imagine we’ve the cinematographer to thank aside from the director himself. Listed as the director of photography would be Hoyte Van Hoytema who interestingly enough had also worked on ‘Interstellar’ with Nolan.

Of course direction is only part of the equation. There is as well the musical score. During the film I found myself thinking about how great it’d if Hans Zimmer had put his musical genius to work on this film. I’d later discover egg on face after learning that the film was indeed blessed by Mr. Zimmer’s composition. His sweeping and intense score help contribute to the film’s constant suspenseful pace. I’ve always been a big fan of great musical scores and I’ve always been convinced of their related importance to a film. These folks getting together for this one film is a match made in heaven; and might I add, Mr. Zimmer worked on ‘Interstellar’ as well.

As last mentions, the film lasted 106 minutes and yet felt so much longer. According to a number of sources, aside from its ensemble cast, there were a whopping 1,500 extras.

Not one single character dominates the screen for too long and that works all too well here; that is, in light of the deeper message of this great work. The evacuation of ‘Dunkirk’ isn’t about winning battles but rather surviving and saving lives. Contrary to the reference, at the end, of a non-essential character getting recognition in the newspaper as a hero, the crux of the story centers on the heroic collective who went on to live another day; thanks to each other and thanks to the other brave souls who ventured on passenger and pleasure craft to their rescue. There’s a scene near the end with an elderly blind man handing out blankets to the soldiers who’ve finally arrived to safety; telling them, “Well done, lads… well done, lads…” Alex, one of the soldiers we’re familiar with, says in turn, ” All we did is survive.” To which the man responds,”That’s enough. Well done lads,” These soldiers came back feeling like failures, thinking they wouldn’t get a warm welcome, yet what they got was the total opposite. They were celebrated for their return; and the elderly man, much like another man who commandeered a yacht towards the soldiers’ rescue did their part for the war effort. It’s a beautiful message that comes from this factual story; not the morals of war but the principles of survival. The coming together of countrymen in light of the approaching evils of the Nazi forces.

Come awards time or more specifically, the Academy Awards, I’ve no doubt in my mind about this motion picture getting award nominations and subsequently winning some. Question is, how many? Best Picture? Without question. Same goes for Cinematography, Film Editing, Original Score, Sound Editing, Sound Mixing, and Writing, Although I doubt there’ll be an acting nominations ‘Dunkirk’ should be one of the big winners all around.

Thank you Mr. Nolan for a job well done!