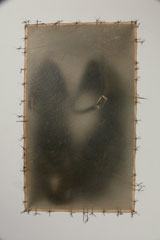 (NEW YORK, NY–May 4, 2015)—From June 26 through October 12, the Solomon R. Guggenheim Museum will present the first major retrospective of the searing, deeply poetic work of the internationally influential artist Doris Salcedo (b. 1958, Bogotá). Over the past three decades, Salcedo has created sculptures and installations that address the traumatic history of modern-day Colombia, as well as wider legacies of suffering stemming from colonialism, racism, and other forms of social injustice across the world. Installed within all four of the Tower Levels of the museum, the exhibition will occupy approximately half of the Guggenheim’s gallery space and will feature the artist’s significant bodies of work from the late 1980s to the present.

This exhibition is supported in part by the Juliet Lea Hillman Simonds Foundation.

The Leadership Committee for Doris Salcedo is gratefully acknowledged for its support, with special thanks to Chair Tiqui Atencio Demirdjian, and including Peter Brandt, Stefan Edlis and Gael Neeson, The Diane and Bruce Halle Foundation, Jill and Peter Kraus, Cindy and Howard Rachofsky, Anna Marie and Robert F. Shapiro, and Jerome and Ellen Stern. Additional funding is provided by the Ministry of Foreign Affairs, Embassy of Colombia.

About the Exhibition
Informed by in-depth research during which the artist solicits firsthand testimonies from victims of violent oppression, Doris Salcedo’s sculptures and site-specific interventions forgo the direct representation of atrocities in favor of evocative installations fashioned from disarming materials and through intensely laborious techniques. By paradoxically giving form to that which is absent, she creates objects and spaces of quiet remembrance and communal mourning. Salcedo has written, “The only concern of my work is what happens to human beings assaulted by violence. . . . the only possible response I can give in the face of irreparable absence is to produce images capable of conveying incompleteness, lack, and emptiness.”

From the outset of her career, Salcedo has employed the strategy of transmuting common domestic objects into vessels freighted with memories and submerged narratives. The earliest works featured in the exhibition incorporate hospital furniture that has been altered by the presence of animal fiber and plastic doll parts. The skeletal frames of hospital cots also are used in the installation Untitled(1989–90/2013), in this case arrayed in bleak formation with eleven stacks of crisply laundered white shirts. The shirts, which might otherwise evoke the comforting harmony of a well-run home, are impaled by steel rebar in an image of violent incursion. These sculptures are, in part, oblique responses to tragic situations in Colombia, but their embodiment of the experience of irreparable loss achieves universal resonance.

Her seminal work Atrabiliarios (1992–2004) creates a chapel-like environment in which a series of wall niches enshrine worn shoes. Covered with pieces of semitranslucent animal fiber sutured to the wall with large, uneven stitches, the shoes are only partially visible, giving them the hazy remove of a fugitive memory. In one of the galleries the artist will configure sculptures from her celebrated body of work dating from 1989–2008, comprised of pieces of domestic furniture that have been suffused with concrete, as if muted and immobilized by the weight of grief. Other series that conjure the complex operation of mourning and memory include La Casa Viuda (1993–95), in which the artist combined disjunctive architectural elements with scraps of fabric and fragments of bone, and Unland (1995–98), in which mismatched tables are forced together, their surfaces populated with an intricate mesh of thread and human hair.

The exhibition will also feature two of Salcedo’s most recent major installations, both of which draw on overtly funereal symbolism yet propose a sense of magic in the apparent impossibility of their materials. In Plegaria Muda (2008–10), viewers are surrounded by a labyrinthine arrangement of units formed from pairs of tables, one inverted on top of the other, through which blades of real grass improbably sprout. The tables approximate the size of human bodies, and together they recall a mass grave, their verdant surfaces suggestive of nature’s power to both heal and erase. A Flor de Piel (2012) is an enormous shroud created in homage to a nurse who was tortured and murdered in Colombia. Its undulating fabric is painstakingly stitched together from chemically preserved rose petals—a material replete with romantic associations that at the same time mimics the appearance of flayed skin. A similar dichotomy between horror and fragile beauty charges Salcedo’s most recent series, Disremembered (2014). Woven from innumerable strands of silk thread and burnt needles, these works take the form of garments that would harm rather than comfort or protect the wearer.

The presentation will also feature a short film documenting the artist’s remarkable site-specific public projects and architectural interventions over the past fifteen years, including iconic works created for sites such as the Plaza de Bolívar in Bogotá and Tate Modern’s Turbine Hall in London. Representing this pivotal aspect of the artist’s practice, Doris Salcedo’s Public Works (2015; 25 min., 40 sec.) will be screened throughout the duration of the exhibition in the New Media Theater on the museum’s lower level.

Following its New York presentation, the exhibition will travel to the Pérez Art Museum Miami in 2016.