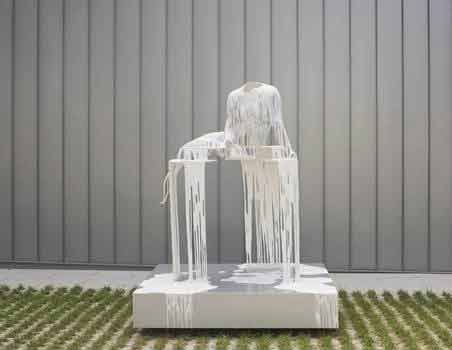 In spring 2018, artist Diana Al-Hadid (American, b. Aleppo, Syria 1981, lives and works in Brooklyn) will create newly commissioned sculptures in Madison Square Park. Two wall works will be combined with rows of hedges to form a room suggesting the elegiac beauty of deteriorating structures nestled into plant material. Three reclining female figures, titled Synonym, sit on plinths and will be displayed on the surrounding lawns. In the Park’s reflecting pool, the artist will realize a site-specific sculptural bust of a female figure perched atop a fragmented mountain. Al-Hadid is best known for creating work using traditional and contemporary sculpture materials and processes in unfamiliar ways that pivot amongst architecture, figuration, and abstraction. Despite the eroded appearance, the process is additive. Al-Hadid devised a distinctive process that is, in her words, “a blend between fresco and tapestry.” Delirious Matter is the first project by the artist and the first Conservancy commission to unite sculpture with plant materials.

Al-Hadid draws influences from the disrupted typologies of architecture, antiquity, cosmology, and Old Master paintings. She finds inspiration in numerous and varied sources such as ancient frescoes, caves, Northern Renaissance art, Medieval Islamic miniatures, ancient time-telling devices, and the modern sculpture of Italian Medardo Rosso. These various interests reflect her perspective as an immigrant from Syria who moved to Ohio when she was a child. She has said: “I was educated by Modernist instructors in the Midwest, but also was raised in an Islamic household with a culture that very much prizes narrative and folklore.”

Her work is therefore indebted to storytelling and to a close study of Modernist principles. Al-Hadid’s walls on the Oval Lawn measure thirty-six feet long by fourteen feet high and twenty-two feet long by fourteen feet high. Their porous structures enable the viewer to see through the sculpture, to breach the wall. The imagery of these delicate facades stands in contrast to the strapping canyon of early twentieth-century skyscrapers surrounding Madison Square Park. The apparent fragility of Al-Hadid’s materials—a delicately poured polymer modified gypsum and fiberglass—is belied by its toughness and resilience. This inherent tension functions as an essential aspect of the project.

One of the artist’s walls depicts Gradiva, a reference to the twentieth-century mythological female character from a novella by Wilhelm Jensen. Gradiva’s name was likely taken from Mars Gradivus, the Roman god who walked into battle. The protagonist of the novella, an archeologist fascinated with the Gradiva bas relief sculpture, obsessively chases his imagined apparition through the ruins of Pompeii on a journey that culminates when Gradiva manifests into his childhood infatuation. With subtlety, viewers will discern Gradiva emanating from the voids in Al-Hadid’s sculptural composition.

The second wall and the sculpture in the Park’s reflecting pool are inspired by an Early Netherlandish painting called Allegory of Chastity by Hans Memling, of a female figure protruding from a mountaintop, the rocky formation suggesting an overgrown skirt around her waist. The painting relates to an abundant history of Early Renaissance paintings depicting voluminous skirts so mountainous that women’s bodies entirely disappear beneath the folds. In all of Al-Hadid’s work, boundaries between figure and landscape, architecture and site, interior and exterior, painting and sculpture, movement and stasis, are obscured. This confusion of boundaries is an integral part of her work.

Al-Hadid has been a United States Artists Rockefeller Fellow (2009) and a New York Foundation for the Arts Fellow in Sculpture (2009). She has received awards including a Pollock-Krasner Foundation Grant (2007) and a Louis Comfort Tiffany Grant (2009). Her work is included in public collections including deCordova Museum and Sculpture Park, Lincoln, Massachusetts; The Museum of Fine Arts, Houston; Weatherspoon Art Museum, The University of North Carolina at Greensboro; Whitney Museum of American Art, New York; and Virginia Museum of Fine Arts, Richmond, Virginia. Al-Hadid lives and works in Brooklyn.

Showman Fabricators in Bayonne, NJ is working with the artist and the Conservancy to fabricate Delirious Matter.

Diana Al-Hadid said: “I am thrilled to have my first large-scale public project on the lawns and in the reflecting pool of Madison Square Park. This is the first time my work will be made and seen at this scale. It’s my largest project by far and my largest audience.  It’s a tremendous honor to be a part of the incredible history of art in the Park.”

Keats Myer said: “We are delighted to bring Diana Al-Hadid’s work to Madison Square Park. I am especially excited to view the artist’s integration of sculpture with plant materials, a first for our art program.”

Brooke Kamin Rapaport said: “I first saw Diana Al-Hadid’s magnificent sculpture Nolli’s Orders several years ago and have continued to observe the significance of her work. Al-Hadid’s work summons sculpture and painting, architecture and literature in a beauteous, atmospheric narrative. The opportunity to bring her work to an outdoor site for the first time is gratifying.”

A celebrated series of sculpture exhibitions by living artists, Mad. Sq. Art was launched by Madison Square Park Conservancy in 2004 to bring free public art programs to New York. The program has received extensive critical and public attention since its inception and has developed into a world-class cultural institution. Its ambition and scale expands each year alongside an increasingly diverse range of innovative, world-class artists.