On the West Coast, California, Oregon and Washington State would do the same 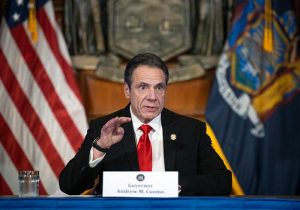 On April 13, 2020 NY Governor Andrew Cuomo would hold a press conference with the governors of neighboring states. The subject at hand was for the announcement of a multi-state partnership aimed towards eventually reopening their economies. Involved in the briefing would be the following state governors: Phil Murphy of New Jersey; Neil Lamont of Connecticut; Tom Wolf of Pennsylvania; John Carney of Delaware and Gina Raimondo of Rhode Island. Later in the day it would be announced that Massachusetts’ Governor Charlie Baker would be joining this group.

The proposed council would include one health expert, one economic development expert and each respective Chief of Staff from each state. The plan would be slowly lift these states’ stay at home orders without raising the risk of an increased spread of COVID-19. 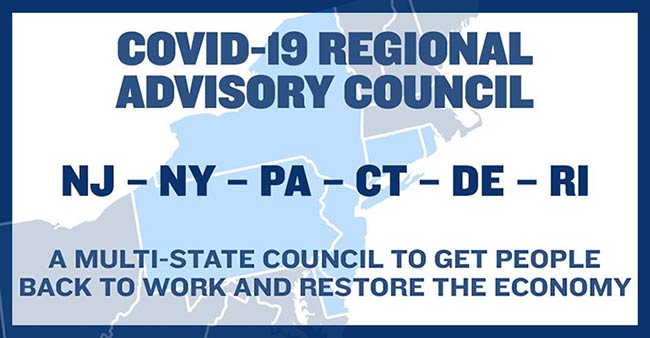 Governor Cuomo would state, “We have been collaborating closely with our neighboring states to combat this pandemic through a uniform approach to social distancing and density reduction and it has been working well. Now it is time to start opening the valve slowly and carefully while watching the infection rate meter so we don’t trigger a second wave of new infections, …This is not a light switch that we can just flick on and everything goes back to normal – we have to come up with a smart, consistent strategy to restart the systems we shut down and get people back to work, and to the extent possible we want to do that through a regional approach because we are a regional economy. New York is partnering with these five states to create a multi-state council that will come up with a framework based on science and data to gradually ease the stay at home restrictions and get our economy back up and running.”

The afternoon’s press conference would be foreshadowed by the Governor’s earlier statement as his daily COVID-19 Response Conference, “I believe the worst is over if we continue to be smart. And I believe we can now start on the path to normalcy, and we can have a plan where you start to see some businesses reopening, understanding the delicate balance. And then you’ll get to a point where they announce we have a proven vaccine. That’s when it’s over. That’s really when it’s over. They have a vaccine, it’s been tested, it’s been proven, they can produce it, you’re going to get a vaccine, this is the thing of the past, don’t worry about it, close the chapter, move on. Okay, when do we get there? Twelve months to 18 months.”

Clarification on the process was offered by New Jersey State Governor, Phil Murphy, “No one has given more thought or is more eager to restart our economy than I am, but if we don’t get the sequencing right, we put more lives at risk. The only path to a sustainable economic recovery is through a strong healthcare recovery. Then, and only then, do we position ourselves to fully ignite our economy and get the residents of our state back to work while minimizing the danger of this disease. A coordinated, regional approach, informed by a multi-state council of experts, will help us avoid a major setback with potentially disastrous consequences. I look forward to the day when the facts on the ground allow us to ease our restrictions and move our regional economy forward.”

On this same day, Governors from America’s west coast states would declare a similar plan. Governors from the following states would be part of their announced “Western States Pact”, Jay Inslee of Washington, Kate Brown of Oregon and Gavin Newsome of California.

At the Governor of California’s Site would be posted this joint statement from these governors:

“”COVID-19 has preyed upon our interconnectedness. In the coming weeks, the West Coast will flip the script on COVID-19 – with our states acting in close coordination and collaboration to ensure the virus can never spread wildly in our communities.””

“”We are announcing that California, Oregon and Washington have agreed to work together on a shared approach for reopening our economies – one that identifies clear indicators for communities to restart public life and business.””

President Trump would in the morning post the following on Twitter,  “For the purpose of creating conflict and confusion, some in the Fake News Media are saying that it is the Governors decision to open up the states, not that of the President of the United States & the Federal Government. Let it be fully understood that this is incorrect…”

On April 11, Mr. Cuomo would state the following, “We don’t know if there’s going to be a second wave or not.”

On the day prior the Governor would also make reference to the possibility of a second wave of infections, “So, what are the relevant questions? Is there going to be a second wave? Let’s look at the countries that have gone through this reopening process and what can we learn from them? Right? Well, we have to start to reopen. Let’s look at what the other countries who have gone before us, what they did, what worked and what didn’t work. When you take just a cursory review you see caution signs. Hong Kong appeared to have the virus under control, they let its guard down, the virus came back. Hong Kong recorded the biggest rise in cases and a new wave of infections. Is that true? Could it happen here? Article yesterday, Italy has seen a bump in the number of cases. You know, before we take a step make sure we are more informed and more aware than we were in the past. They’re talking about a second wave in Singapore.”

“You got back and you look at the 1918 flu epidemic. That was over 10 months. There was a first wave, there was a second wave. The second wave was worse than the first wave because the virus mutated. Third peak and the whole experience was 10 months. Is there any extrapolation to where we are today? I don’t know the answers. This is not what I do. It’s not what a state does.”

A search for news on “second wave coronavirus” reveals many results centering on countries which are indeed experiencing a resurgence of Novel Coronavirus infections.