Governor Andrew Cuomo on Saturday, March 21 brought us up to date on the progression of the fight to slow down the spread of COVID-19.

Amongst the various items mentioned, the governor spoke of the scouting to be done at numerous locales for the sake of the expansion of hospital facilities.

“We’re working on every level. Every pistol is firing. Everything that can be done is being done. New Yorkers are lucky. We have a very experienced team that’s doing this. This is not their first rodeo. They’ve been through a number of emergencies on a number of levels.

“Increasing hospital capacity – we want to get the capacity of 50,000 thousand up to a minimum of 75,000. We told the hospitals we’re going to be ending elective surgeries. We are now working with hospitals to reconfigure the space in the hospital to get more beds and to find more staff to manage those beds. We’re working on building new beds. We’re going to go out and review a number of sites today. I’d like to give the final list to the federal government and the Army Corps of Engineers today but we’re looking at Javits, SUNY Stony Brook, SUNY Westbury, the Westchester Convention Center, and I’m going to go out and take a look at those sites today or the ones I can get to. That would give us a regional distribution and a real capacity if we can get them up quickly enough and then increasing supplies which is one of the most critical activities.”

Latest reports in NYC indicate that the Army is considering converting certain hotel and dorm locations into hospitals.

Over the past weeks, both Governor Cuomo and NYC Mayor Bill de Blasio have spoken over and over again about the need for medical supplies. On that issue the Governor said:

“We are literally scouting the globe looking for medical supplies. We’ve identified 2 million N-95 masks which are the high protection masks. We have apparel companies that are converting to mask manufacturing companies in the State of New York in all sorts of creative configurations and I want to thank them. I put out a plea yesterday to ask them for help and we’ve been on the phone with all sorts of companies who are really doing great work. We’re also exploring the State of New York manufacturing masks ourselves.”

The Governor followed up on FEMA’s declaration of New York State as a Major Disaster.

Mr. Cuomo also had the following to say regarding rumors and truths:

“Also, in terms of context, perspective. Don’t listen to rumors. I mean, you have such wild rumors out there, and people call me with the craziest theories. Just, I understand there’s anxiety and stress, but let’s remember some basic context and facts. Society functions. Everything works. There’s going to be food in the grocery stores. There’s no reason to buy a hundred rolls of toilet paper. There really isn’t. And by the way, where do you even put a hundred rolls of toilet paper? The transportation system functions. The pharmacy system functions. These things are all going to work. Nonessential workers, stay home, but the essential workers are staying home, especially the healthcare workers. There is not going to be any roadblock when you wake up in the morning that says you can’t leave this place, you can’t leave that place, right? So if you have a real question, because you think there’s a real concern from a credible source, contact my team. We have a special website: coronavirus.health.ny.gov, and ask the question and you will get a real, truthful, factual response.”

“You know, you can have your own opinion. You cannot have your own facts – you want to have an opinion, have an opinion, but you can’t have your own facts. “Well young people don’t get this disease.” You are wrong – that is not a fact. 18-49 years old are 54 percent of the cases in New York State. 54 percent. 18-49 years old. So you’re not Superman, and you’re not Superwoman, you can get this virus and you can transfer the virus and you can wind up hurting someone who you love or hurting someone wholly inadvertently. Social distancing works and you need social distancing everywhere. There’s a significant amount of non-compliance, especially in New York City, especially in the parks – I’m going to go down there today, I want to see what situation is myself, but it has to be stopped because you are endangering people and if it’s because of misinformation, if it’s because of noncompliance, I don’t care frankly – this is a public health issue and you cannot endanger other people’s health. You shouldn’t be endangering your own. But you certainly have no right to endanger someone else’s.” 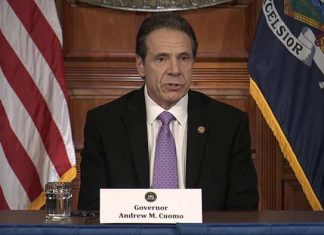