As of this morning, NYC has nearly 18,000 confirmed cases and a death toll of nearly 200. A couple days earlier, New York Police Commissioner Dermot Shea announced that  “211 members of the NYPD tested positive. Of those 177 of the 211 are uniformed, 34 are civilian members.”

Is it Airborne or Not?

Earlier in the week, Dr. Oxiris Barbot, Commissioner of the New York City Department of Health and Mental Hygiene, had the following to say when asked if Novel Coronavirus is airborne or not:

“This is not an airborne virus such as measles. This is a virus that’s spread by droplets… it really shouldn’t matter if a virus lives 10 minutes, two hours, two days because the important thing is the guidance that we’re giving to New Yorkers hasn’t changed, which is the importance of frequent hand washing, the importance of covering your mouth and your nose when you cough in your sneeze, and by all means if you’re sick, stay home.”

The good doctor is reiterating that which has been repeated again and again by herself and Mayor de Blasio in days past.

My question is, what about the shortage in alcohol and sanitizers? No doubt either one is impossible to find. All that hoarding did nothing but leave empty shelves in pharmacies and other locales. Meanwhile, I’m still wondering about all that free hand sanitizer offered up by Governor Cuomo a couple weeks back. Didn’t he say they’d be producing 100,000 gallons per week? – and handing it to the communities and locales in dire need? I’d say our city is in mighty dire need, wouldn’t you? Our numbers put us as THE EPICENTER of the country. We’ve just over half the cases in the state and one third of the country.

Here’s an idea: IF handing some of that sanitizer over to NYC residents isn’t a viable option then how about a mass distribution throughout NYC’s streets, pharmacies, supermarkets and other locales offering up essential services. Set up dispensers everywhere. Make it so vast and overreaching that you wouldn’t be able to go a block without coming across one. That might be a bit much since then you’ll need to refill them. In that case, maybe have those storefronts (allowed to operate) place such dispensers right outside their establishments. Place them in charge of these dispensers so that they’ll be responsible for refilling them and maintaining them. Not too farfetched if you ask me. Offer them incentives for doing so and punishment for abusing the process.

Mayor de Blasio’s plan on opening some streets in NYC to pedestrian traffic’s to begin tomorrow, March 26. Supposedly it’ll involve two blocks per borough. Hmmmm, two blocks or main thoroughfares? I wonder. Gonna have to be big enough stretches of open street to be worth it I think.

On a related note:

“On the question of the parks now…I want to differentiate strongly the parks and the playgrounds. The area that we’re all concerned about to make sure that there’s real clear adherence to the rules or else by the end of Saturday we might get to a shutdown, is the playgrounds themselves. The parks obviously are – in many of them huge. They’re absolutely necessary in a situation like this. Parks will remain open, but with a lot of enforcement under any scenario. So, there’s a real differentiation there. And again, we’ll make that decision on the playgrounds at the end of Saturday after we’ve seen how it’s gone up to them.”

The mayor today also mentioned how, of the 1,700 or so basketball courts in the city, 80 locations would have their basketball hoops removed. He said that any of the remaining ones are liable to losing their hoops as well if there’s a lack of adherence to the rules (that being the distancing mandates in place).

I’d posted mention of this online and one response pointed out how folks will simply pull out the milk crates. Errrr, huh? Searched on Google for ‘Milk Crate Basketball’ and easily saw what he meant. Sure enough, it’s a thing. I had no idea. Anyhow, following is the Mayor’s statement on that item:

“If you’re a kid or adult who just wants to shoot hoops yourself, single, solitary, you can do that. Make sure you’re socially distanced from the people around you. If you’re a family that people live under the same roof and you want to play with each other on the basketball court, that’s fine. But what’s not fine anymore is any kind of basketball game between people who do not live under the same roof, because, let’s face it, it’s a contact sport, people are going to get close together, it creates a danger. It does not mean social distancing, so here’s what we’re going to do. I’ve heard back from the Parks Department and the NYPD that they have found 80 locations – 80 courts around the city out of about 1,700 that, after repeated attempts to make sure everyone there understood what social distancing was, they did not get the response they wanted. And so, in those 80 locations, we’re going to remove the basketball hoops and make it impossible, sadly, for people to play basketball there. That’s what we have to do right now at those 80 locations. The courts will still be there for folks who want to do any other kind of recreation and we’ll be enforcing that. But there will not be any basketball games because there will not be any basketball hoops. And as I said, there’s about 1,700 locations total so that means about 1,600 more courts that we can leave intact, if people follow the rules. People don’t follow the rules, we’ll take the hoops down there. And if we have to end up closing off basketball courts across the board, we’ll do it, if we have to. I don’t want to do it. I want to see if we can get it right. I want to give people maximum options, but you’d got to follow the rules to matter of everyone’s safety.”

Mr. de Blasio said that 200 inmates will have been released by this evening of Wednesday, March 25 and that there’ll additional releases tomorrow.

“A lot of work is going on right now to ensure that any inmates who should be brought out of our jail system because of health issues or concerns will be any inmates who can be directly acted on by the City of New York and not pose a specific serious threat to community.”

One spot I’ve been following daily is Italy. As of today they’ve reach the 10% milestone. That is, 10 percent of those infected have died. Some time ago I remember it being at just below 4%. It steadily crept up from there. There appeared to be a tiny glimmer of hope as it hovered at 9.5% recently but that was short lived. Now? 10 Percent!

Thankfully, America’s at just 1.5%, but the night is young my friends and we’ve only just begun.

But hey, we don’t HAVE to be Number one, do we? There’s this one article titled “New Orleans emerges as next coronavirus epicenter, threatening rest of South‘ 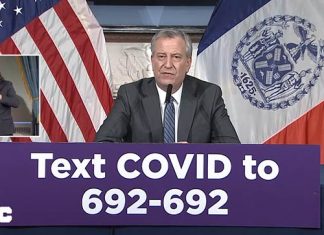 Media questioning of NYC Mayor on the Speed of his Response and Action This posting has been placed up not as a representation of our...