Update: Images of the possible location provided at the end of this story.

The US Army Corps of Engineers under the direction of FEMA (Federal Emergency Management Agency) is in the process of building a field hospital within the Bronx’ Van Cortlandt Park. It’s one of a few new contracts awarded for work to be done at the Park as well as at CUNY Staten Island and the Aquaduct Racetrack in the borough of Queens. This is all in light of the military’s efforts to assist with NYC’s struggle in dealing with the overflow of COVID-19 patients; as well as the need for medical personnel and beds.

The contracts for all three locations were awarded on April 4 with work begun on the same day and expected to be completed by April 24. A week earlier, a temporary field hospital was completed within Manhattan’s Central Park.

According to the USACE site, 200 beds should be available at the Van Cortlandt Site, 150 for the CUNY SI location and 200 beds for the Queens locale.

Located within the Bronx borough, the park is one of the city’s largest parks with over 1,100 acres. The site of the temporary hospital, according to Councilmember Andrew Cohen (mentioned below) will be on the Parade Grounds section of the park.

As borrowed from an official page at the Army Corps of Engineers website (shared for the sake of clarifying the USACE relationship with/to FEMA):

Each year, the US Army Corps of Engineers (USACE) deploys hundreds of its trained personnel and resources  across the United States and its territories to respond to emergencies and aid in disaster response and recovery. Under the National Response Framework (NRF) and authorities of the Stafford Act; USACE works under the direction of FEMA as a member of the federal team to support State and Local governments in responding to major disasters.  USACE also has its own authority to directly respond to State and Local needs related to flooding or coastal emergencies under Public Law 84-99.

COVID-19 Update: Van Cortland Park will be the site of a temporary field hospital in the Bronx on the Parade Ground. The alternate care site is expected to be up and running within 3 weeks & will provide 200 beds across 12 acres. Work started yesterday by U.S. Army Corps & @fema. 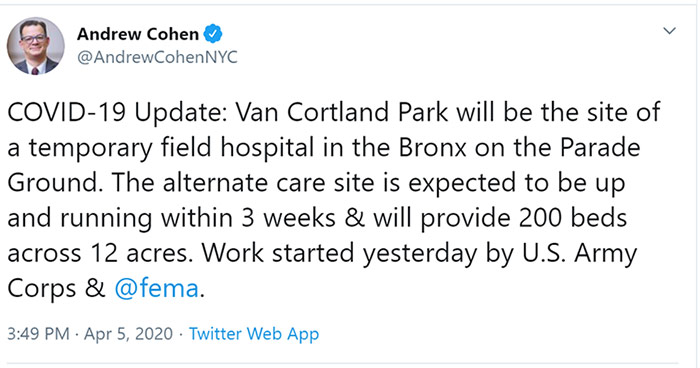 Passed by Van Cortlandt Park this afternoon.Found a fenced off section that appeared to be readied for a future project of some sort. I do believe that area would qualify as part of the parade grounds. Approached and asked a parks police officer there if what I was seeing was to be the upcoming field hospital and he replied that none of them were sure. Keep in mind that the field hospital in Central Park was put together very quickly and as mentioned above, this site isn’t expected to be completed until April 24.

Again, we’re not sure if these photos are of the actual location where the temporary hospital will go up. 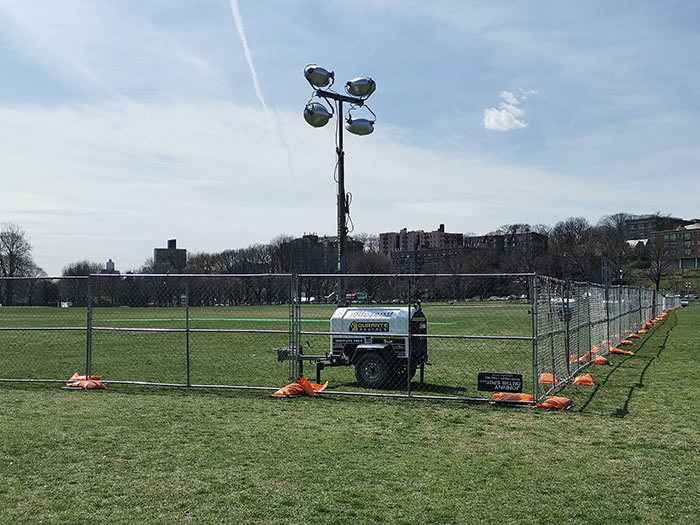