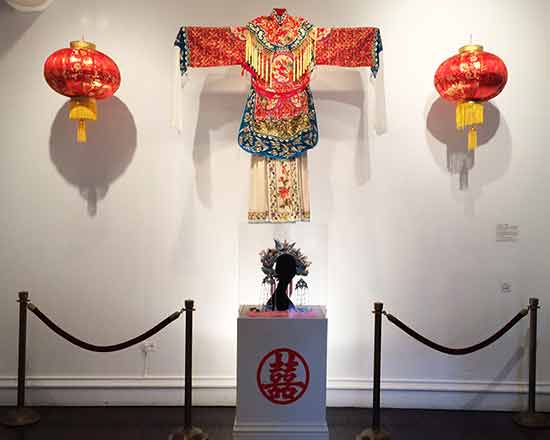 The Peking Opera is recognized as the most important Chinese theater in China. Known as the “Imperial Theater” because emperors and queens were deeply in love with it during the Qing Dynasty, these opera costumes are considered to be an important achievement in theater art. This exhibition presents carefully selected pieces from some of the most famous episodes in Peking Opera. These charming yet stunning works of art will provide many surprises.

(Flushing, N.Y.) – On February 6, Flushing Town Hall unveils The Art of Imperial Peking Opera Costume exhibition, a program of the 2018 Lunar New Year Celebrations by Flushing Town Hall. The event is designed to celebrate one of the most important traditional holidays within the Asian American community.

The Art of Imperial Peking Opera Costume exhibition will open to the public on Saturday, February 17, displaying some of the most classic and recognizable costume pieces from the most well-known and beloved Peking Opera episodes. Some of the most impressive pieces include the hand-embroidered emperor’s and queen’s robes with intricate patterns and high contrast colors.

The Peking opera costumes are designed to reflect the social status, personality, and psychological being of the characters. The exhibition focuses on interpreting the relationship between the character and display of color, symbol and design on the character’s costume.

The opening ceremony of “The Art of Imperial Peking Opera Costume” will take place on Saturday, February 17 at 2 pm. Peking opera performers will be dressed in Peking opera costumes with full makeup, just like they would be seen on stage. The exhibition will be on-view for three weeks until March 11, providing the public a rare opportunity to appreciate the intricacy and beauty of the costumes at their own pace. The exhibition is free to the public.