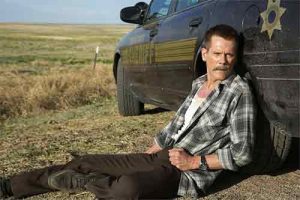 If it’s an intricate plot with sharp witted dialogue you’re looking for then this film isn’t it; and that may very well be this film’s saving grace. The light script and lack of complicated twists allow you to pay special care to the two protagonists: Travis played by James Freedson-Jackson and Harrison played by Hays Wellford. Two kids wandering through desolate fields after having run away from home. Along the way they stumble upon an abandoned cop car with the keys still within the overhead console. The joyride they take next is one which may very well change their lives forever considering how badly the sheriff whose car they’d taken wants it back; not just for the sake of having it back, but as well for the grave secret in the car’s trunk. A surprise the two boys will soon discover themselves. The two young actors mind you, do an excellent job of playing, well, boys. Innocent ones in the midst of exploring and feeding their own curiosity.

Aside from the kids are the other two main characters who as adults are almost as silly as they are wicked. Not entirely sure if Sheriff Kretzer, played by Kevin Bacon, and the ‘man’, played by Shea Whigham were meant to appear as borderline goofy or not is irrelevant considering how well it works in the movie’s favor as comic relief. Chuckles emanating from my fellow viewing audience might confirm that notion; all in tune with these characters’ bumbling mannerisms. Beyond these folks the cast is just as sparse as the dialogue which along with the acting all rang true enough. In total there are only five characters whose faces we actually see leaving just over a handful of others whose voices we hear. 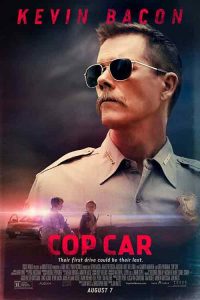 Very little detail is given out in as far as how crooked the cop or the other character(s) may have been or how they came to find themselves at the point within the narrative where we’ve come to know them. The boys’ own ages and the state in which this tale takes place, as with the aforementioned characters, are only hinted at…’and yet the absence of all these details matter little since this simple tale plays out rather well despite falling short of the sort of intensity I’d have wished for. I’ve seen remarks here and there alluding to the great tension in this film and I honestly didn’t feel that way. I wish the director had taken steps to raise the suspense levels at particularly important key points in the story line; a step which I think would’ve made the difference between this being a great tale instead of merely an average one. It’s that very thing that troubles me most about this film. What could very well have been a wonderfully told “on the edge of your seat” experience ended up being merely average. What could have been a great achievement in movie making instead amounted to average fare the likes of which can be found on any one of a number of cable TV offerings. Which isn’t to say that the film wasn’t well done. It certainly was in as far as how the plot flowed from one scene to the next. It simply wasn’t all that it could have been.

Other Items Worth Mentioning