Faceted ring of golden, mirrored hearts to create a kaleidoscopic pavilion that multiplies the spectacle of Times Square 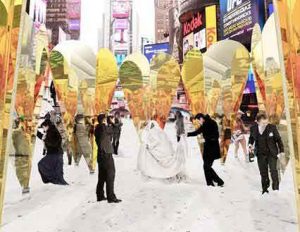 New York. 2015 – Times Square Arts announced that Collective–LOK is the winner of this year’s annual Times Square Valentine Heart Design curated by the Center for Architecture.  Over the last eight years, the Times Square Alliance has invited architecture and design firms to submit proposals for a romantic public art installation celebrating Valentine’s Day in Times Square. This year’s winning design, Heart of Hearts, will be unveiled on February 9, and remain on view through March 6 at Father Duffy Square, between 46th and 47th Streets.

CLOK’s Heart of Hearts, a faceted ring of nine golden, mirrored hearts, will create an alternative pavilion that reflects and multiplies the pulsating activity of Times Square, creating a kaleidoscopic interior that dissolves the boundaries between viewing and performing. Within the ring, diamond-shaped spaces inside each heart will create “kissing booths” where couples will find their activities mirrored, allowing both privacy and publicity in the Heart of Hearts. This room within the room of Times Square is the most site-specific Heart installation to date and will be the first time a Valentine Heart will reach above 10 feet.

Collective–LOK, the architects, said, “We are thrilled to create the Heart of Hearts for Valentine’s Day, an engagement ring for our love affair with the spectacle of Times Square. It’s truly a special opportunity to provide a space for intimacy and performance in the heart of the city, one we hope visitors will love.”

Tim Tompkins, President of the Times Square Alliance, said “For the eighth annual Times Square Valentine Design Competition, Collective–LOK has created the first installation that uses the unique identity of this iconic urban place as the spectacle itself, almost as if it were a larger-than-life kaleidoscope.”

David Burney, FAIA, Interim Executive Director of the AIANY and Center for Architecture, said, “The cacophony of Times Square is a tough place to celebrate the tender passion of Saint Valentine. But Collective–LOK has pulled it off with nine mirrored golden hearts that create a kaleidoscopic reflection of all who walk through them. It is both a stage and an enclosure – a room-within-the-room of Times Square that will invite participatory celebration of Valentine’s anniversary.”

Commissioner Mitchell Silver, NYC Department of Parks & Recreation, said “NYC Parks has a long track record of fascinating contemporary art programming that sparks people’s imaginations and stirs up conversation, and Heart of Hearts is no exception. Through this pavilion, New Yorkers and visitors can engage and connect with each other and this great city in new and thrilling ways. Public art and its impact on people is integral to the way we experience our shared spaces, and it nourishes the soul. Thanks to our partners at the Times Square Alliance, as well as Collective–LOK for bringing people together with this exciting exhibition in the heart of Manhattan – Duffy Square.”

Tom Krizmanic, AIA LEED AP, President-Elect, Center for Architecture and Principal, STUDIO architecture and Juror said, “The Heart of Hearts concept by Collective–LOK for the annual Valentine in Times Square of New York City has a powerful simplicity – a gathered circle of mirrored heart cut-outs that we envision will attract and engage visiting viewers and lovers – reflecting and engaging, at all times of day, the energy of the people and the vibrant environment.”

Times Square Arts, the public art program of the Times Square Alliance, collaborates with contemporary artists and cultural institutions to experiment and engage with one of the world’s most iconic urban places. Through the Square’s electronic billboards, public plazas, vacant areas and popular venues, and the Alliance’s own online landscape, Times Square Arts invites leading contemporary creators to help the public see Times Square in new ways.  Times Square has always been a place of risk, innovation and creativity, and the Arts Program ensures these qualities remain central to the district’s unique identity. Generous support of Times Square Arts is provided by ArtPlace America and ArtWorks. Visit http://www.timessquarenyc.org/times-square-arts/index.aspx for more information. Follow us on Twitter and Instagram at @TSqArts.

About the Center for Architecture

The Center for Architecture is a destination for all interested in the built environment. It is the public-facing affiliate of the American Institute of Architects New York Chapter, which provides resources to both the public and building industry professionals. Through exhibitions, programs, and special events, the Center aims to improve the quality and sustainability of the built environment, foster exchange between the design, construction, and real estate communities, and encourage collaborations across the city and globe. As the city’s leading cultural institution focusing on architecture, the Center drives positive change through the power of design. For more information, please visit www.aiany.org.  Follow the Center for Architecture on Twitter and Instagram at @CenterforArch.

Jon Lott, AIA, is principal of PARA Project and Design Critic in Architecture at Harvard University’s Graduate School of Design. He is a recipient of the Architectural League’s New York Prize, a 2009 MoMA PS1 finalist, and is currently completing renovations to the Syracuse University School of Education won by invited competition. He holds the Master of Architecture with Distinction from Harvard University’s Graduate School of Design and the Bachelor of Architecture from California Polytechnic University San Luis Obispo. Prior to PARA, he worked for the Office of Metropolitan Architecture and REX Architects on large-scale cultural and institutional buildings, with Preston Scott Cohen on the Tel Aviv Museum of Art, and with the New York City Parks & Recreation Department directing the development of various public projects in the New York metropolitan area. He is an NCARB certified licensed architect, with licensure in New York State.

William O’Brien Jr. is principal of WOJR: Organization for Architecture, an independent design practice in Cambridge, Massachusetts, and Associate Professor of Architecture at MIT where he currently holds the Cecil and Ida Green Career Development Chair. He was the recipient of the 2012-2013 Rome Prize Fellowship in Architecture awarded by the American Academy in Rome. His practice was awarded the 2011 Architectural League Prize for Young Architects and Designers, and in 2010 was a finalist for the MoMA PS1 Young Architects Program and a Design Biennial Boston winner. O’Brien has taught previously as a Bernard Maybeck Fellow at The University of California Berkeley, as a LeFevre Emerging Practitioner Fellow at The Ohio State University, and as Assistant Professor at The University of Texas at Austin. He has been named a MacDowell Fellow by the MacDowell Colony in Peterborough, New Hampshire, and a Socrates Fellow by the Aspen Institute.

Michael Kubo is co-director of pinkcomma gallery in Boston and an author of Heroic: Concrete Architecture and the New Boston (2015). He is a Ph.D. Candidate in the History, Theory, and Criticism of Architecture at MIT and a pre-doctoral fellow of the Center for Advanced Study in the Visual Arts (CASVA) at the National Gallery of Art for 2015–2017, where his work focuses on the rise and international extension of collective architectural practice in the United States after World War II. He was Associate Curator for OfficeUS, the U.S. Pavilion at the 2014 International Architecture Biennale in Venice, and is co-editor of OfficeUS Atlas (2015). He holds the Master of Architecture from Harvard University’s Graduate School of Design and has taught at Pratt Institute, the University of Texas at Austin, and SUNY Buffalo, where he was the Peter Reyner Banham Fellow for 2008-2009.