NATIONAL BLACK THEATRE AND THE CLASSICAL THEATRE OF HARLEM

and performances will be held 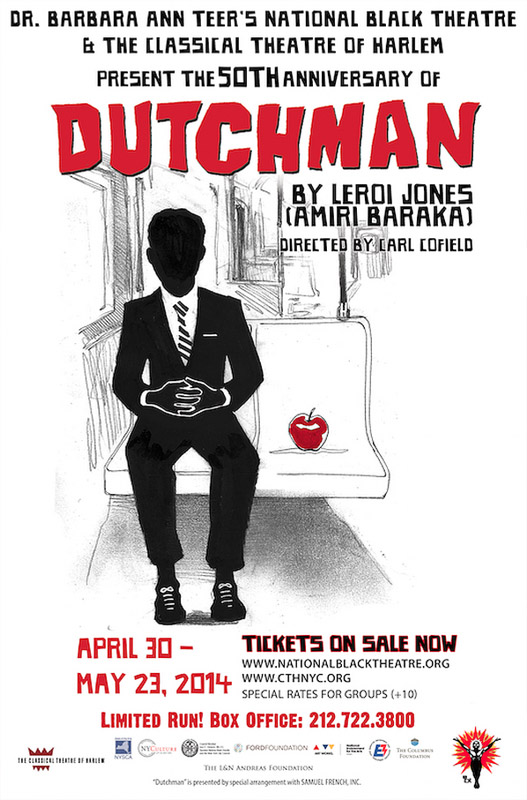 NEW YORK (April 3, 2014)—Actor Sharif Atkins (“White Collar,” “Hawaii,” “ER”) will star as Clay in the co-production of “Dutchman” by LeRoi Jones (Amiri Baraka) by Dr. Barbara Ann Teer’s National Black Theatre (NBT) and The Classical Theatre of Harlem (CTH). The two theater companies are mounting the production 50 years after the March 1964 world premiere of the play at the Cherry Lane Theatre and in tribute to the late theater great Baraka, who died on January 9. Ambien Mitchell stars opposite Atkins as Lula and Lorenzo Scott joins the cast as the Conductor. Previews of the Carl Cofield-directed show begin on April 30 and run through May 2, and performances run from May 3 through May 23 at National Black Theatre in Harlem.

“Dutchman” is a classic political allegory on race relations that immediately preceded the 1960s Black Arts Movement, the artistic flank of the Black Power Movement of the 1960s, which Baraka helped to start in Harlem. The shocking one-act play won an Obie Award for Best American Play in 1964 and went on to receive the Hollywood treatment in 1967 with a film starring the late Al Freeman, Jr., and Shirley Knight.

“My mother (Dr. Barbara Ann Teer) and Amiri Baraka were comrades in the fight to liberate black artists (people) from the confounds of mental slavery by telling the unapologetic truth of who we were born to be; thus raising consciousness around important issues that African-Americans in this country were facing and dying for, even today,” said NBT Chief Executive Officer Sade Lythcott. “Although they often had different approaches, they both were aligned against the same forces. In fact, she helped raise money for his defense fund when charges were brought against him out of the 1967 Newark riots.”

“‘Dutchman’ is an incredible piece of literature that does more than strike a chord; it creates a symphony of discords in the minds and hearts of all who experience it. The play profoundly asks: In order to express myself in any endeavor, am I actually suppressing who I am? Do I, unwittingly or not, suppress others for my own gain? How seductive is access and privilege, and what’s the price of chasing it?” stated CTH Producing Artistic Director Ty Jones.

The producers will take a retrospective look at the Black Theatre Movement as well as relevant current events that recall the themes of the play through interactive Community Engagements they will curate to enrich the theatrical experience. In addition to symposia and weekend talkbacks, an exhibit tentatively titled, Where Are We Now? Retrospective on Black Theatre Movement, will be unveiled during the Opening Night Gala on Saturday, May 3 and remain on public display at National Black Theatre.

Tickets are on sale now for Dutchman, which is playing at National Black Theatre located at 2031 Fifth Avenue between 125th and 126th Streets in Harlem. Previews run Wednesday, April 30 to Friday, May 2; preview tickets are $25. The production opens May 3, celebrated by an Opening Night Gala that includes a reception starting at 7 pm and a show time of 8 pm. Performances will run on Tuesdays through Saturdays at 7:30 pm, with a Saturday matinee at 2 pm; Sunday performances will be at 4 pm. The final week will additionally include three 2 pm matinee weekday performances on May 20, 21 and 22. Tickets are $35 general admission with the following exceptions: all seats for the evening shows during the final week are $40 and Opening and Closing Night Gala tickets (May 3 and May 23) are $50. Discount tickets are available for groups (10+), senior citizens, students and active military members as well as veterans. Tickets can be purchased online at www.nationalblacktheatre.org, by calling NBT directly at (212) 722- 3800 or at NBT’s Box Office from 1 pm to 6 pm, Tuesday through Saturday.

Sharif Atkins (Clay) stars as Clinton Jones in the USA Network original series “White Collar,” which just completed filming its fifth season. He is best known for his successful five-year stint playing the role of Dr. Michael Gallant on “ER.” Atkins next starred in the NBC series “Hawaii,” also created by Jeff Eastin, then spent two seasons playing Gary Navarro, the hearer of thoughts, on USA’s “The 4400” while recurring in a romantic arc with music, film and television star Eve on her series “Eve.” He also starred in the Warner Bros. feature film “Preacher’s Kid” and in independent films including “All Nighter,” “Paved with Good Intentions” and “Out of Exile.” His most recent roles include numerous guest starring appearances on a variety of top television series including “The Good Wife,” “House,” “CSI: Miami,” “Criminal Minds,” “Cold Case,” “Raising the Bar,” a recurring role on “Numb3rs” and earlier appearances on “In Justice,” “Arli$$” and “The District,” among others.

Ambien Mitchell (Lula) is an accomplished actress and Actor’s Equity Association member, who has appeared in numerous New York City productions, including “Spoon River Anthology” (Columbia Stages), “Clothes for a Summer Hotel” (White Horse Theatre Co.) and “Chains of Dew” (Zephyer Rep). She has also appeared in many regional theater productions, including Sierra Repertory Theatre’s “Harvey”; The Theater at Monmouth’s “The Taming of the Shrew,” “Our Town,” “The Knight of the Burning Pestle,” “The Glass Menagerie,” “Henry IV Part One,” “The Two Gentlemen of Verona,” “Blithe Spirit” and “Much Ado About Nothing”; Northern Stage’s “Amadeus”; Triad Stage’s “The Diary of Anne Frank” and North Carolina Shakespeare Festival’s “The Crucible.”

Lorenzo Scott (Conductor) is a versatile and talented actor who has appeared in the feature films “100 Years of Evil,” “Sneakers & Soul” and “A Perfect Fit.” He was Papa Shakespeare in the Theatre Project’s production of “The African Company Presents Richard III,” and Felix in the off-Broadway production of “The Odd Couple.” He has appeared in stage productions of “Huck Finn” and “The Exonerated,” playing Jim and Delbert Tibbs respectively. Scott portrayed Leonato in Oberon Theatre Ensemble’s production of “Much Ado About Nothing” at the Beckett Theatre in New York, played Jim Hungerford in the Schoolhouse Theatre’s production of “Days of Wine and Roses” and portrayed Gabriel in New Harmony Theatre’s production of “Fences.” He has appeared in numerous commercials and ads, from the very popular Chase Freedom campaign to ads for Verizon Wireless, Optimum Online, Absolut Vodka, American Express, Viagra, Nationwide Insurance and Obamacare. When not working on stage, doing a voice-over or shooting a television commercial, industrial or feature film, Scott is a familiar face in print ads as a model.

Carl Cofield (Director) is a New York-based director and actor. He directed the award-winning world premiere of One Night In Miami (Huffington Post Best of L.A. 2013, N.A.A.C.P., L.A. Drama Critics Circle and others) for Rogue Machine Theater. Cofield’s New York City directing credits include: The Seven by Will Power at the Connelly Theatre, The Tuskegee Airman Project for CUNY York College, Hello, I’m Eve by Rebecca Nicholson, The Bear, and others. He assisted Molly Smith in the world premiere of Camp David by Laurence Wright at Arena Stage. He also assisted Kent Gash on Langston In Harlem at Urban Stages. For more information, visit www.carlcofield.com.

Founded by visionary Dr. Barbara Ann Teer in 1968, National Black Theatre (NBT) is a nationally recognized cultural and educational institution. Dr. Teer pioneered “the healing art of black theatre as an instrument for wholeness in urban communities where entrepreneurial artists of African descent live and work.” In 1983, Dr. Teer expanded the vision of NBT by purchasing a 64,000-square-foot building on 125th Street and Fifth Avenue (renamed “National Black Theatre Way” by local law in 1994). This was the first revenue-generating black arts complex in the country, an innovative arrangement through which for-profit businesses who shared NBT’s spiritual and aesthetic values rented retail space to subsidize the arts. Out of her vision, NBT houses the largest collection of Nigerian new sacred art in the Western hemisphere and is considered the authentic representation of a model whose time has come. NBT is partially supported by grants from the City Council of New York, City of New York Department of Cultural Affairs, New York State Council on the Arts, Columbia Service Society, Theatre Communications Group, Met-Life and private donations. Visit www.nationalblacktheatre.org or follow NBT on Facebook (www.facebook.com/NationalBlackTheatre ) and Twitter/Instagram (@NatBlackTheatre).