Experimental theatre piece about an iconic figure in American history
and his unexpected journey to Ukraine.

Everyone knows about Pocahontas, but few are aware that shortly before Smith first sailed for Virginia, he was an adventurer in the Mediterranean and fought against the Ottoman Turks.  In 1602, he was captured and sold as a slave. His master, a Turkish nobleman, sent him as a gift to his mistress, who fell in love with him. Taken across the Black Sea, he escaped through what is now Ukraine. He returned to England in 1604 and joined the Virginia Company of London in 1606, setting sail for the New World in 1607. Smith’s autobiography, published in 1630, is the primary source for this play. Although the theatre piece is grounded in historical material, the issues raised in “Capt. John Smith Goes to Ukraine” find reflections in today’s headlines from Kyiv.

The show is a comedy/musical/historical epic-in-an hour with three characters.  John Smith is played by Bob Holman, founder of Bowery Poetry Club in New York.  Susan Hwang, a Korean-American comic/performance artist & accordion player, plays all of Smith’s love interests. Julian Kytasty, a legendary Ukrainian traditional musician, provides the sound score.  Performed in Ukrainian and English, “Captain John Smith Goes to Ukraine” echoes Smith’s travels across many boundaries.  Projections by Volodymyr Klyuzko with Mikhail Shraga include archival discoveries and beautiful engravings by John Payne from the original 1630 edition of Smith’s book, all enlivened with an outrageous a sense of humor.

Bob Holman is the founder and artistic director of the Bowery Poetry Club and the poet most often connected with the oral tradition, poetry in digital media: spoken word, performance, hiphop, slams, poetry films and endangered languages. He studied poetry at Columbia University where he now teaches. He has published sixteen books of poetry, most recently “A Couple of Ways of Doing Something,” a collaboration with Chuck Close from Aperture. He also produced the award-winning Public Broadcasting System series, “The United States of Poetry,” and is currently working on two Endangered Language Projects: 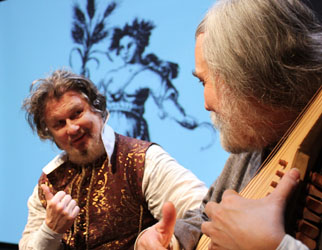 Susan Hwang is a performance artists, musician and song writer who has appeared at Joe’s Pub and Bowery Poetry Club. She tours internationally with Debutante Hour, and curates the Hip Hop Book Club. She appeared in Yara Arts Group’s “Scythian Stones,” at La MaMa in Kiev and Kyrgyzstan in 2010.

Musician Julian Kytasty is one of the world’s premier bandura players. A third-generation bandurist, he has concertized throughout the Americas and Europe. In 1989-1990 Kytasty toured Ukraine, performing over one hundred concerts. In his more recent work, Mr. Kytasty has redefined the possibilities of the bandura. He has recorded and performed with the Canadian world music group Paris to Kyiv, and with his own groundbreaking Experimental Bandura Trio. His collaborators include artists as diverse as Chinese pipa virtuoso Wu Man, Mongolian master musician Battuvshin, performance poet Bob Holman, pioneering klezmer revivalist Michael Alpert, composer/saxophonist John Zorn and electronic composer Alla Zagaykevych.  His instrument, the bandura, evolved as an accompanying instrument for epic songs (dumy), many of which describe the same experiences as Smith’s.

Bob Holman writes, “Julian’s work gets to the essence of Ukrainian tradition which, when set against the contemporary immediacy of my own work, results in a new kind of translation. Spoken word tradition has bridged the African griot and hip hop. Working with Julian on the Smith material illuminates a different aspect of this tradition – the connection of Ukrainian ‘duma,’ the autobiography of Smith, and my own colloquial contemporary poetry. This mix creates a wide open synthesis, a fresh visioning, for this untold Smith story. My over-the-top love poems fill out the emotional dimension of our piece, while Susan Hwang’s ironic songs undercut them.”

Virlana Tkacz, as founding director of Yara Arts Group, has created twenty four original theater pieces with the company, all of which had their American premieres at La MaMa in New York. The Village Voice described Yara’s production of “Circle” as “stunningly beautiful work that rushes at your senses, makes your heart pound, and shakes your feelings loose.” Off-Off Online (Michael Bettencourt) labeled Yara’s “Scythian Stones,” with the world renowned Ukrainian singer Nina Matvienko and Kyrgyz artists, “Pick of the Week” and wrote, “The performance builds what good theatre should always build: an alternate world that allows us to re-learn and reflect upon the great questions at the core of our being human.”

Yara Arts Group, founded in 1990, is a resident company of La MaMa Theatre in New York. The troupe transforms original material into experimental theatre productions in a signature style that uses multilingual dialogue and music supported by evocative visuals and projections. Timely issues are explored through the diverse cultural perspectives of the group’s members, bringing together poetry, song, historical materials and scientific texts, primarily from the East, to form what one critic described as “extended meditation on an idea.” The company has created sixteen pieces based on materials from Ukraine and Eastern Europe, six theater pieces with Buryat artists from Siberia, two with artists from Kyrgyzstan and three based on Hawaiian and Japanese material. For additional information please check www.brama.com/yara.