Burials in NYC Parks? : Mayor Bill de Blasio says No, That Is False

Burials in NYC Parks? : Mayor Bill de Blasio says No, That Is False

Today, numerous papers and media outlets had stories speaking of how those who’ve lost their battle with Coronavirus would be buried in NYC’s Parks due to the overflow of bodies. Everyone from the NY Post and Fox News to the Daily News, Politico and others had some related story of the day headlining this grim scenario.

It all began with a number of tweets from NYC Council member Mark Levine of Manhattan’s 7th District. His tweet read as so:

Soon we’ll start “temporary interment”. This likely will be done by using a NYC park for burials (yes you read that right). Trenches will be dug for 10 caskets in a line.

It will be done in a dignified, orderly — and temporary – manner. But it will be tough for NYers to take. 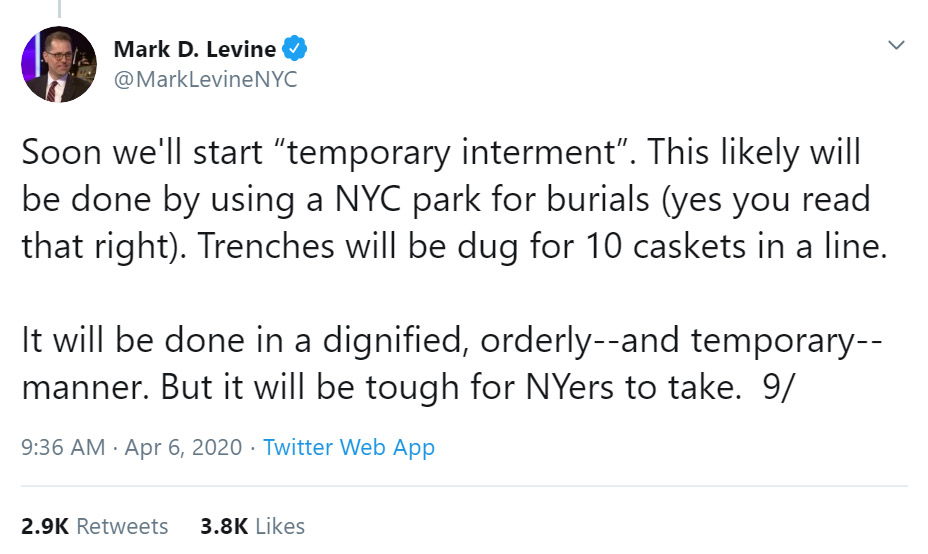 Social Media in turn responded with an uproar of disbelief. Nearly every single person I knew from the NYC area was expressing their own concerns and shock on the supposed issue.

I say ‘supposed’ since it turned out to not be true. Not according to NYC Mayor Bill de Blasio.

In the early evening, the Mayor would make an appearance on NY1’s Inside City Hall with Errol Louis. He would be asked about this by Louis, “I wanted to start Mr. Mayor with this this grim question about burials and where bodies will be before they’re prepared for burial. There were –just to squash rumors or conspiracy theories, there was talk about there being temporary burials inside public parks. Can you clear up whether or not that’s being considered?”

The Mayor responded by saying, “No, that is false. Totally false”.  He went on to outline how he as well as the Governor are witnessing promising signs of where hospitalizations were concerned. He then went on to add the following: “Second, so much of what has been said on this topic is insensitive and unfair to families. Meaning the issue, what happens when we lose our loved ones, when people pass away? I’m going to appeal to all New Yorkers, I’m going to appeal to the media to please think about the human reality of what you’re talking here. This is a very, very painful topic for the families that have already lost their loved ones. . It’s a painful topic for families that have loved ones who are sick or they fear will be sick with the coronavirus. Is this really what we’re going to put so much energy into talking about this painful possibility that people will need to be buried.”